Bitcoin’s [BTC] recent volatile fluctuations can be linked to the recent drama surrounding cryptocurrency exchange Bitfinex and their Tether [USDT] holdings. However, hours before the event, one exchange saw a massive Bitcoin price fall, leading to speculation surrounding pre-existing information about the market dip.

Kraken, the American cryptocurrency giant, saw a notable “dump” of Bitcoin, leading to the coin descending below $5,000 prior to the announcement by the New York Attorney General. No concrete evidence points to a correlation between the BTC price decline on Kraken and the imminent announcement, but many in the community are curious.

Timing being the key in this episode, it should be noted that the Bitfinex-news was broken by the Wall Street Journal at 2320 ET on April 25. The subsequent crash, as per exchange data was recorded at 2100 UTC or 1700 UTC i.e. hours prior to the information from the Attorney General’s office was made public.

Based on the timing alone, the Kraken dump occurred prior to the WSJ report being published as well as before the collective market selling off Bitcoins led to the top cryptocurrency dropping under $5,200.

Furthermore, a possible return of Bitcoins stolen in August 2016 could also be the reason. Two years ago, Bitfinex, suffered a hack totaling over $65 million, leading to their investors’ funds dropping by over 35 percent.

After seeing weeks of ascending movement, the collective market bulls were struck down with the Bitfinex-Tether ordeal, dropping the market cap below $170 billion, for the first time in weeks. Bitcoin’s price no doubt took a huge hit, dropping from a high of over $5,600 on April 24 to under $5,200 three days later.

Following the dump, the price of the Bitcoin on the American exchange has held steady just around $5,150, confirming to the larger market data.

Some cryptocurrency proponents on Twitter have suggested “dirty spillage” that emerged from Kraken’s “illiquid book” as the reason for this obscure market movement on the exchange in contrast to the larger market movement.

Interesting, Arbing Tool, a Twitter handle that records arbitrage opportunities between the price of top cryptocurrencies on different exchanges recorded significant price deviations, on April 25, in the price of BTC on Kraken and other exchanges like Poloneix, HitBTC, OKEx, among others. 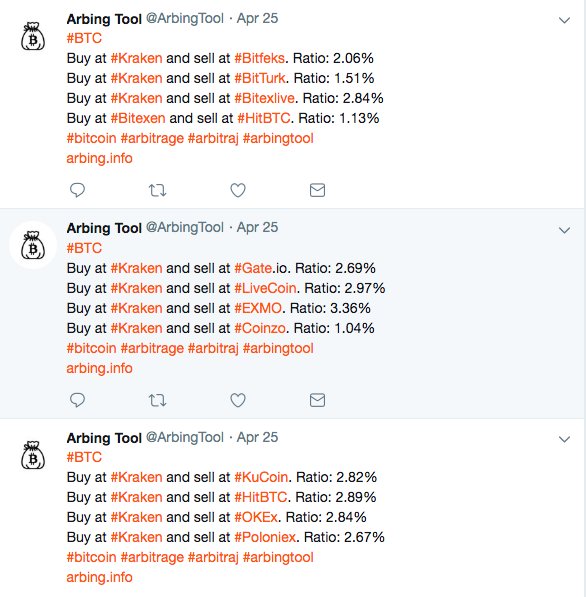 Is Blockchain Necessary? An Unbiased Perspective

Blockchain Is Not a Panacea for Finance, Says Russian Bank Official

Stellar Will Give 2.5 Million Lumens To Charities to Help During Crisis

The Stellar Development Foundation has committed up to 2.5 million Lumens to six non-profit organizations to help out during the coronavirus crisis — and they’re […]

Recent changes to Intelligent Tracking Prevention (ITP) in iOS may have killed burner wallets for iPhone users. Burner wallets are non-custodial wallets that store a […]

The cryptocurrency trading app of Germany’s second-largest stock exchange, Boerse Stuttgart, exceeded 100,000 users on March 30 amid increasingly permissive regulations in the country. The […]

Nik Bougalis, a cryptographer, software engineer and lead of the C++ team at Ripple, has published a proposed method for enhancing the privacy of transactions […]

3M to increase production of face masks after Trump order

Pictured: 19-year-old who bled to death after stabbing outside garage