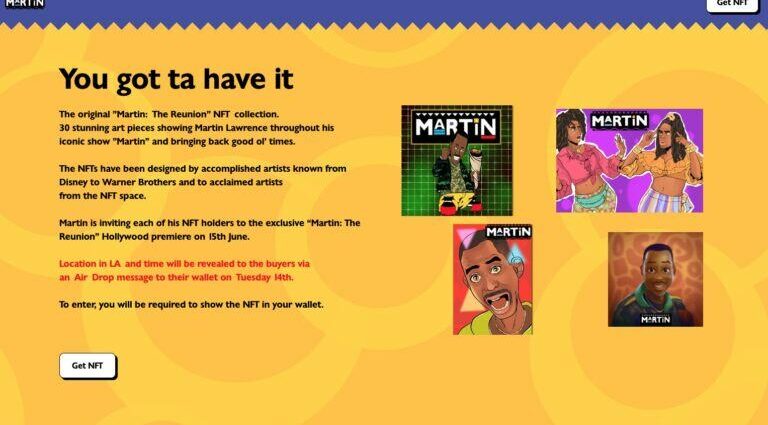 On Saturday (June 11), American comedian and actor Martin Lawrence announced that he had sold the first NFT from his Cardano-powered “Martin: The Reunion” NFT collection for 3,000 ADA tokens.

As you may remember, on June 7, Lawrence announced — during a conversation on Twitter Spaces with Patrick Tobler, Founder and CEO of NFT-MAKER, and Charles Hoskinson, Co-Founder and CEO of IO Global (aka “IOG”, formerly known as “IOHK”), the company responsible for Cardano’s research and development — that he was going to release a Cardano-powered NFT collection consisting of 30 unique pieces.

Below are some highlights of what Lawrence and Hoskinson said during this chat.

When and How Lawrence Got Into Crypto

“A couple of years ago… my team brought NFTs to my attention.“

“I want to learn more about them… That’s why I’m excited to partner with your company.“

What Hoskinson Thinks About How NFTs Have Evolved on Cardano

“I didn’t expect Cardano to be a major player in the NFT space, at least initially. It kind of caught us all by surprise. We worked really hard at trying to create great asset standards… We didn’t expect to to have NFTs be quite large, but then it was completely community led. So, all these projects materialised out of nowhere, and about 40% of the 1000+ projects on Cardano are NFT-related, and there’s over five million assets that have been issued on Cardano, and the transaction volume is remarkable…

“Well, I think it’s interesting that people can have some in the metaverse that’s just for them.“

Then, on June 10, Lawrence announced that his “Martin: The Reunion” NFT collection had gone on sale on his website www.martincnft.com and that holders of any of these 30 NFTs would be invited to attend on June 15 the Hollywood premiere of “Martin: The Reunion”, which is set to air on Black Entertainment Television (BET) on January 16.

Here are three of the pieces from the “Martin: The Reunion” NFT collection: These 30 NFTs “have been designed by accomplished artists known from Disney to Warner Brothers and to acclaimed artists from the NFT space.”

Lawrence’s website explains that the exact time and location the premiere party in LA, where holders of the NFTs will be able to hang out with him, “will be revealed to the buyers via an Air Drop message to their wallet on Tuesday 14th.”