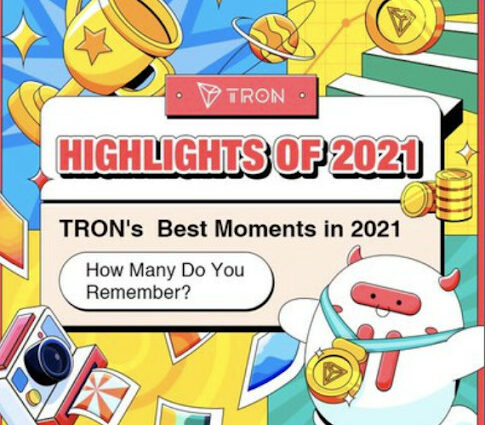 TRON has had a stellar year, continuously making headlines in 2021. TRON remains to carry out the infrastructure for a truly decentralized internet and has shared the list of 2021 highlights.

As one of the largest blockchain protocols globally, TRON powers smart contract functionality and is one of the first and most popular chains to build on a delegated proof-of-stake (DPOS) consensus model. So successful is the protocol that it now boasts over $14 billion in Total Value Locked (TVL), setting a new record.

H.E. Justin Sun, appointed as the Ambassador of Grenada to the WTO, also noted on TRON’s milestones, “I am incredibly proud and honored to have been part of TRON’s growth and evolution. Today the TRON blockchain protocol is essentially decentralized.” Sun continues, “Henceforth, I do not doubt that the TRON network is sufficiently self-sustainable as a decentralized autonomous organization (DAO). This marks TRON’s entry into a new era of decentralization.”

2021 had more success to offer TRON. The ambitious project was listed for trading as an Exchange-Traded Note (ETN) on Deutsche Börse Xetra in Germany, and Euronext in Paris and Amsterdam, among eleven other European countries under VanEck TRX ETN (VTRX). This makes it tradeable like an ETF on regulated stock exchanges.

According to VanEck, the project gives investors the chance to invest in “Asia’s next-generation blockchain innovator.” The ETN allows exposure to investors by following the “super-fast TRON platform, supporting builders of crypto apps with an innovative proof-of-stake mechanism.”

In the first quarter of 2021, TRON became the largest issuer of the USDT stablecoin, with a global circulation exceeding 23.9 billion and a massive market cap of over $24 billion, surpassing the supply and market cap of the Ethereum-based USDT, dominating over 51% of Tether’s total market cap.

2022 marks a new era for TRON, and if the milestones achieved in 2021 are the baseline, a new dawn for the blockchain industry is coming.

TRON is dedicated to accelerating the decentralization of the internet via blockchain technology and decentralized applications (dApps). Founded in September 2017 by H.E. Justin Sun, the TRON network has continued to deliver impressive achievements since MainNet launch in May 2018. July 2018 also marked the ecosystem integration of BitTorrent, a pioneer in decentralized services boasting nearly 100M monthly active users. The TRON network has gained incredible traction in recent years, with over 69 million users on the blockchain and upwards of 2.7 billion transactions. In addition, TRON hosts the largest circulating supply of stablecoins across the globe, overtaking USDT on Ethereum in April 2021. The TRON network completed full decentralization in Dec 2021 and is now a purely community-governed DAO.