Perhaps the biggest shock at last month's WNBA draft was Kysre Gondrezick, who was selected with the No. 4 overall pick by the Indiana Fever. Few analysts had the West Virginia star going in the first round — and certainly not in the top five — but the 5-foot-9 guard wasn't surprised.

Gondrezick, a WBCA honorable mention All-American, averaged 19.5 points, 4.5 assists and 2.9 rebounds for the Mountaineers in the 2020-21 season. She transferred to West Virginia after her freshman year from Michigan, where she was named to the Big Ten All-Freshman Team and the All-Big Ten Second Team. She ended her senior campaign with the Mountaineers earning a unanimous selection to the All-Big 12 First Team, becoming the rare player to earn all-league accolades with two different conferences.

So, despite projections from pundits, Gondrezick was confident she would be chosen within the first 12 picks.

“I had a feeling though that I was going to go at least first round, just from all of the interactions and meetings that I had with the coaches that had picks in those first 12,” Gondrezick told USA TODAY Sports. “The relationship that I built through Zoom meetings and the interactions that the coaches and I had on the phone and just their loyalty they had watching me from the beginning of the season all the way to the end. I had a good feeling that they would take me as their top and priority pick.”

Coming off of a 6-16 season, the Fever's front office secured a shooter that the franchise can put to immediate use. Indiana tips off the season Friday at 7 p.m. ET against the New York Liberty.

“It has been a great fit for me here,” said Gondrezick, noting that she feels very good in where she landed because Indiana’s pick-and-roll oriented play allows her to be her best self.

“I am coming into a system that is already very familiar for me coming from under the instruction of coach (Mike) Carey and the motion defense and offense.” 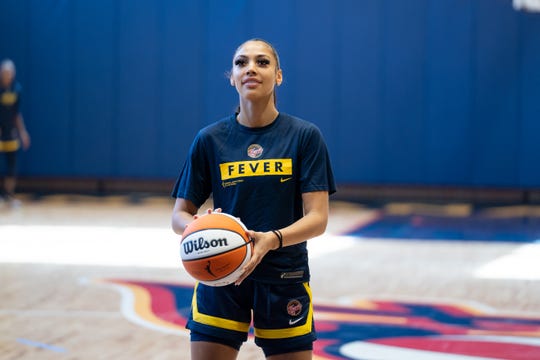