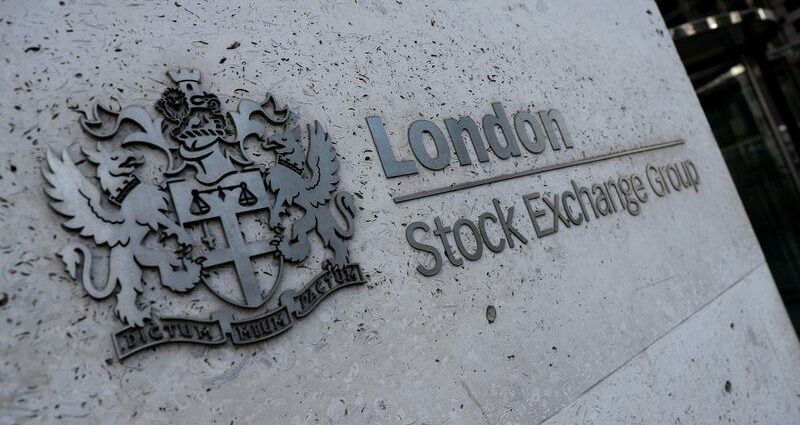 MILAN (Reuters) – World shares steadied near lows on Tuesday as worries that rising oil prices will feed inflationary pressures appeared to ease, while the dollar regained strength ahead of U.S. payrolls data on Friday seen as key to the Federal Reserve’s next move.

FILE PHOTO: Signage is seen outside the entrance of the London Stock Exchange in London, Britain. Aug 23, 2018. REUTERS/Peter Nicholls

MSCI’s gauge of global stocks slipped 0.04% by 1150 GMT but was off a more than three-month low hit during Asian trading.

Wall Street was also set for a rebound with futures on the tech-heavy Nasdaq and the S&P 500 both up 0.5%.

Asian shares fell for a third straight day, catching up with heavy losses in the United States, where investors dumped Big Tech as Facebook was hit by a nearly six-hour outage.

Facebook’s stock rose more than 1% in U.S. pre-market trade after its services came back online.

But investors remained cautious, worrying that the rally in energy prices and supply chain disruptions could derail the economic recovery just as the U.S. Federal Reserve gets closer to reducing its massive stimulus.

“More than anything else, we are concerned about the impact of stagflation on the general indices, which are very high,” said Giuseppe Sersale, fund manager at Anthilia.

“We prefer energy and materials, of course, and we’re worried about stocks with high multiples that price who-knows-what increase in earnings (see Nasdaq),” he added.

Banks, which tend to benefit from tighter monetary policy, were the strongest gainers in Europe, up more than 2%.

JPMorgan analysts confirmed their overweight view on European lenders, citing the pick-up in inflation and expectations of higher bond yields.

Oil prices in London hit fresh three-year highs, extending gains from the previous session that came after the world’s major oil producers announced they had decided to keep a cap on crude supplies.

OPEC+ confirmed on Monday it would stick to its current output policy here as demand for petroleum products rebounds, despite pressure from some countries for a bigger boost to production.

“That potentially threatens the global economic recovery, just as global oil demand growth is picking up as economies reopen on the back of rising vaccination rates,” Dhar said.

Market focus in Asia was on whether embattled property developer China Evergrande here would offer any respite to investors looking for signs of asset disposals.

Trading in shares in the world’s largest indebted developer was halted on Monday but other Chinese property developers grappled with ratings downgrades on worries about their ability to repay debt.

The U.S. dollar edged back towards a one-year high versus major peers ahead of a key payrolls report at the end of the week that could boost the case for the Fed to start tapering stimulus as soon as next month.

“A positive number, which in this case would be somewhere in the region of 480,000 or above, will give the Fed the final reason it requires to initiate the tapering of its asset purchase program,” said ActivTrades analyst Ricardo Evangelista. The dollar index, which tracks the greenback versus a basket of six currencies, was last up 0.1% at 93.9, while the euro fell 0.16% to $1.1602.

Bitcoinrose above the $50,000 mark for the first time in four weeks, adding to a series of gains since the start of October. It was last up 1.6% on the day.

U.S. bond yields nudged up towards recent highs amid caution about the need to raise the government’s debt ceiling as the country faces the risk of a historic default in two weeks.