A massive wildfire in Oregon that has forced thousands of residents to evacuate and turned the sky orange may have been stoked by downed power lines, according to unconfirmed reports.

Portland General Electric acknowledged in a statement it received unconfirmed reports that heavy winds and debris damaged electric equipment, which may have sparked a number of fires that helped contribute to already burning wildfires.

However, Portland General Electric said it’s not aware of any evidence “that our equipment caused any of the fires.”

Shares of Portland Gas Electric traded down as much as 16% in Thursday trades to $31.96.

The Santiam wildfire has spread to 159,000 acres and forced thousands of residents to evacuate towns that are dotted along the Route 22 highway, according to reporting from Oregon Public Broadcasting.

Read More: A strategist at the world’s largest wealth manager lays out 4 election-related risks that could damage investors’ portfolios – and shares how to safeguard against each one now, regardless of who wins

The fires are located just one hour southeast of Portland, and have contributed to turning the sky orange, a phenomenon also seen in San Francisco and other parts of northern California over the past couple of days due to unrelated wildfires.

Heavy winds on Monday and Tuesday contributed to power outages for more than 150,000 PGE customers, and likely led to the downed powerlines cited as a potential spark of the growing wildfire.

“PGE is receiving unconfirmed reports that some fires in the region may have been started by electrical equipment affected by heavy winds and debris. We are working alongside community leaders and emergency responders to fully assess each situation and outage to understand the circumstances,” the company said.

PGE is not to be confused with California-based PG&E, or Pacific Gas and Electric,which also suffered a severe decline in its stock price after it was found liable for sparking a number of devastating wildfires in California throughout 2018 and 2019. 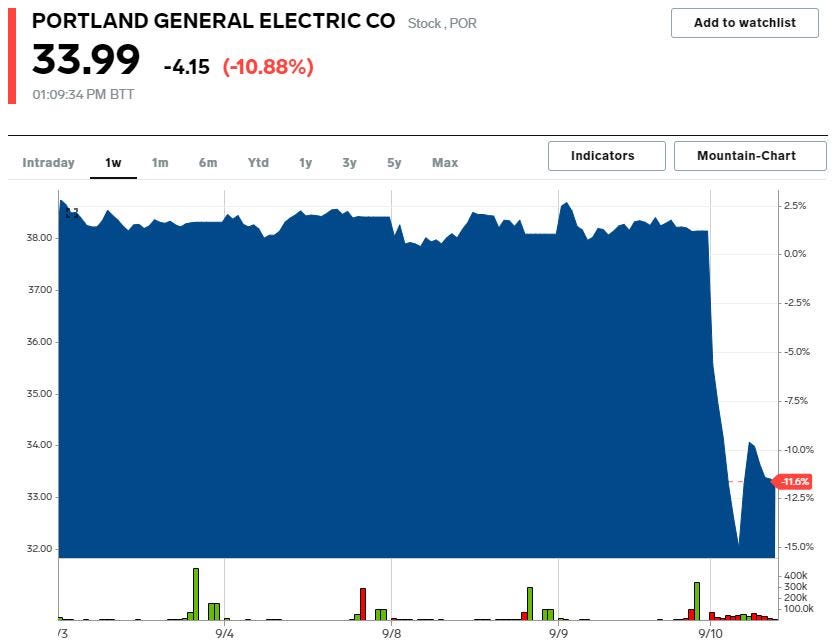