US Imposes Unprecedented Sanctions On Russia; To Accept 100,000 Ukrainian Refugees 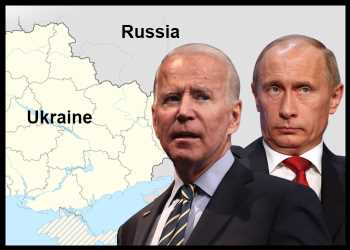 The United States has imposed sanctions on more than 400 Russian elites, Russian parliament the Duma and more than 300 of its members, and defense companies that fuel President Vladimir Putin’s war on Ukraine.

48 large state-owned defense enterprises that are part of Russia’s defense-industrial base and produce weapons that have been used in the war against Ukraine, including Russian Helicopters, Tactical Missiles Corporation, High Precision Systems, NPK Tekhmash OAO, and Kronshtadt were also sanctioned.

The latest round of U.S. sanctions on Russia is unprecedented. “In no other circumstance have we moved so swiftly and in such a coordinated fashion to impose devastating costs on any other country,” the White House says.

The Biden administration also announced more than $1 billion in new funding towards humanitarian assistance for those affected by the war in Ukraine.

An additional $320 million has been pledged in democracy and human rights funding to Ukraine and its neighbors.

In another major development, the United States announced plans to receive up to 100,000 Ukrainian refugees and others fleeing the war through legal pathways, including the U.S. Refugee Admissions Program.

President Joe Biden has left Brussels for Poland on a visit the White House said is intended to highlight the war’s refugee crisis. According to the UN, more than 3.6 million people have fled Ukraine since Russia’s invasion began more than a month ago.

In a statement after the Extraordinary NATO Summit in Brussels, President Joe Biden said, “We had the privilege of hearing directly from President Zelenskyy, and we will continue to support him and his government with significant, and increasing, amounts of security assistance to fight Russian aggression and uphold their right to self-defense”.

G7 leaders and the European Union have announced an initiative to share information about and coordinate responses related to Russia’s evasive measures to undercut the effectiveness of the Western countries’ joint punitive measures.

The two powerful political blocs will continue to work jointly to blunt Russia’s ability to deploy its international reserves to prop up the economy and fund Putin’s war, including by making clear that any transaction involving gold related to the Central Bank of Russia is covered by existing sanctions.

The Russian economy is reeling under pressure by the compounding effects of isolation from the international community over the invasion of Ukraine.

The ruble has depreciated substantially, and is expected by markets to weaken further. The Central Bank of Russia has doubled interest rates to 20 percent and companies are being forced to turn over foreign exchange for rubles to provide the Russian Government hard currency.

The economy is forecast to contract as much as 15 percent in 2022. This economic collapse of Russia’s GDP will wipe out the past 15 years of economic gains in Russia, according to the Institute for International Finance. Inflation in Russia is already spiking, with analysts projecting it to rise up to 15 percent a year-over-year, and the Russian Government has been downgraded to “Junk” status by major credit rating agencies. More than 400 multinational companies have left Russia in a mass exodus by the private sector.

The UK Defense Ministry said Ukraine’s forces have retaken some towns and defensive positions on the eastern outskirts of capital Kyiv.