Two sheriff’s deputies fatally shot a man Thursday afternoon during an arrest attempt in Minneapolis, prompting protests and public outcry to release footage of the shooting.

While authorities did not immediately release the man’s name, family and friends identified him as Winston Boogie Smith, a 32-year-old father of three.

The U.S. Marshals Service said in a statement sent to USA TODAY that its task force was trying to arrest the man on a state warrant for illegal possession of a firearm. The man, who was parked in a car, “failed to comply with officers’ commands” and “produced a handgun resulting in task force members firing upon the subject,” according to the statement.

Two sheriff’s deputies — one from Hennepin County and one from Ramsey County — were involved in the shooting, according to the Minnesota Bureau of Criminal Apprehension, which is leading the investigation. State investigators said a handgun and spent cartridge found inside the car indicate that the man also fired his gun.

No video footage of the incident has been released. 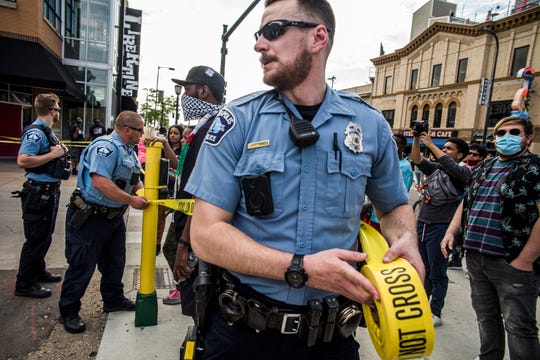 Police investigate a shooting as protesters gather on Thursday, June 3, 2021 in Minneapolis. Crowds vandalized buildings and stole from businesses in Minneapolis’ Uptown neighborhood after officials said a man was fatally shot by authorities. (Photo: Richard.Tsong-Taatari, AP)

The Bureau of Criminal Apprehension said there is no squad camera footage of the shooting, and the U.S. Marshals Service does not allow body cameras for officers on this task force.

Task force members attempted life-saving measures, but the man was pronounced dead at the scene, the statement said. A female occupant of the car was treated for minor injuries due to glass debris.

As word of the shooting spread, a crowd of protesters formed Thursday afternoon. While some shouted expletives at police, the crowd largely remained peaceful.

Nine people were arrested on charges that ranged from arson, assault and damage to property, police said. 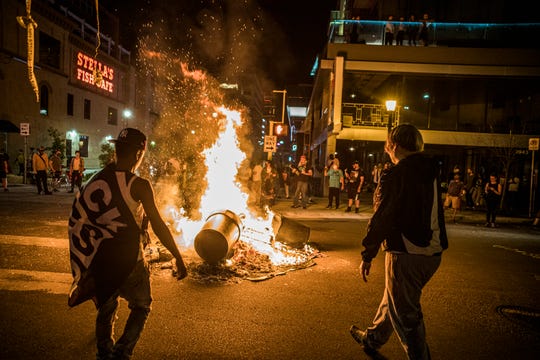 Protesters set a dumpster on fire after a shooting on Thursday, June 3, 2021 in Minneapolis. Crowds vandalized buildings and stole from businesses in Minneapolis’ Uptown neighborhood after officials said a man was fatally shot by authorities. (Photo: Richard.Tsong-Taatari, AP)

Smith’s family planned a Friday rally near the shooting site to demand immediate release of bodycam footage, the Star Tribune reported. The family is also calling for the names of the officers to be released, according to the newspaper.

Smith’s friends and family members have been posting photos, tributes to him and memories on what appears to be Smith’s Facebook page.

“I hate that I have to be out here again,” one post said. “And not because they just killed another black man.. but because that black man was my friend. A father. A brother. OUR friend.”

Smith was an aspiring musician, actor and comedian, according to his Instagram page. The Star Tribune reported Smith had gained a local following through online comedy sketches.

Minneapolis has been on edge since last year’s death of George Floyd, a Black man who was pinned to ground by Minneapolis police officer Derek Chauvin, who was convicted in April of murder and manslaughter. Protests also followed the fatal police shooting of Black motorist Daunte Wright in the nearby suburb of Brooklyn Center in April.

Before the Thursday shooting, tensions were rising as crews removed concrete barriers around a Minneapolis intersection informally called George Floyd Square, where community members and activists left artwork and flowers in a memorial to Floyd.