New York (CNN Business)Scientists have pointed to beef as one major culprit in climate change. But that doesn’t mean all burgers are created equal.

Greenhouse gas emissions from livestock represent 14.5% of all emissions produced by human activity, according to the Food and Agriculture Organization of the United Nations. Livestock farming has such a large impact because cows, through burps, farts and manure, emit methane, a potent heat-trapping gas. Raising cows for food also uses a tremendous amount of land and water, some of which could be used to produce food more efficiently.
Scientists last year implored governments to set reduction targets for livestock farms in order to help fight climate change in a letter to the Lancet Planetary Health Journal. Clearing land for livestock farming also contributes to global warming.

Still, “there are ways to produce beef that are a lot better than others,” said Tim Searchinger, research scholar at Princeton University and a senior fellow at the World Resources Institute, a nonprofit group that works on climate change solutions. “So long as we are going to eat beef, we want to produce it well.”
Certain grazing practices can help improve the local ecology and capture carbon from the atmosphere, while adding ingredients like lemongrass or seaweed to cattle diets could potentially help reduce methane, he said. Some farmers have adopted these grazing practices, and say the methods are making a huge difference. 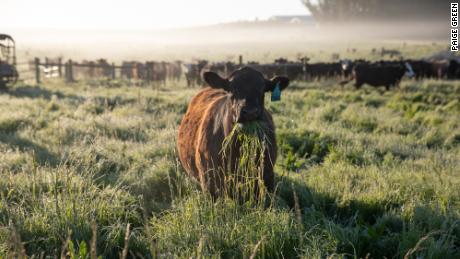 In the United States, most beef does not come from pasture-raised cows that munch on grass. More often, it comes from factory farms, or massive facilities that raise animals for food. But cattle raised on grasslands and grazed in specific ways can help improve local ecosystems.
Rotational grazing, or moving cattle around to give grassland time to recover between feedings, can lead to “more native wildlife, better water quality and produce more beef,” Searchinger said. Producing more beef per acre helps save land.
Loren Poncia and his wife Lisa own Stemple Creek Ranch, a family farm in Tomales, California. His family has changed their farming practices to make their land healthier.
“By grazing with more of a plan and having higher impact for a shorter amount of time, we actually grow more forage and we sequester more carbon in the soil,” said Poncia.

Grazing practices that are better for the land help maintain the health of the grass the cows eat, as well as the soil, keeping heat-trapping carbon stored in the ground instead of releasing it into the air. Sequestering carbon helps fight climate change by removing harmful carbon dioxide from the atmosphere, in addition to improving soil health.
“There’s a very nice relationship in healthy landscapes between green and growing plants, like grass, and carbon storage underground,” said Courtney White, co-founder of The Quivira Coalition, a non-profit group devoted to improving ecological health.
For Will Harris, a fourth-generation cattle rancher in Bluffton, Georgia, that type of grazing is a way to emulate the farming practices of his ancestors, which were less taxing on the land and animals.
After college at the University of Georgia’s School of Agriculture, Harris joined his father on their farm, White Oak Pastures. At the time, White Oak used industrial farming tactics. But Harris eventually realized that those methods were sapping the land.
“In the mid ’90s I started changing my farming practices to a system that really would resemble what my great-grandfather and grandfather did on this farm more than it did what my father and I had done on the farm,” he said.
Now, he said, “we graze the land the way that the buffalo would have, with a maximum animal impact on the land and then a very long recovery time before we get back to that piece of land.” That requires moving his animals to new parts of the pasture daily. 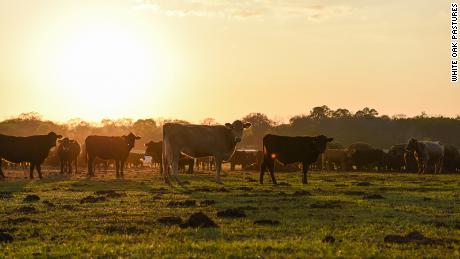 Grazing patterns can help improve land and trap carbon in soil, but it doesn’t cut back on methane, the greenhouse gases emitted by cows.
To reduce methane, some farmers might consider using feed additives in cow diets — a still-experimental practice that caught Burger King’s attention.
Recently, the burger chain announced that it will start using lemongrass-fed beef in its Whopper burgers in some locations. Adding lemongrass to bovine diets can help reduce their methane emissions by about 33% per day, Burger King said. The chain worked on the project with professors from the Autonomous University at the State of Mexico and University of California, Davis.
Others are exploring the use of seaweed and other ingredients.
Strategic grazing operations and these types of additives can both play a role in helping improve cattle’s impact on the environment, Searchinger noted.

Another crucial component involves changing consumer practices: Eating less meat. Reducing meat intake is one of the most impactful ways for individuals to reduce their contribution to global warming.
“Moderating our beef consumption is really important,” Searchinger said. “I’m in favor of all of the above.”
Source: Read Full Article