The Biggest Gun Makers in America 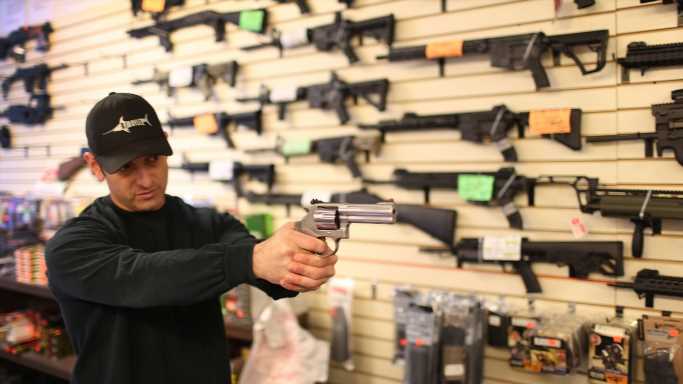 In the first year of the COVID-19 pandemic, gun ownership surged in the United States. According to a recent Gallup poll, the share of Americans living in a household with a firearm jumped from 40% in 2019 to 44% in 2020.

Rising consumer demand for firearms in recent years is a continuation of a longer-term trend. Licensed gun manufacturers produced more than 11.3 million firearms domestically in 2020, more than double the 5.6 million produced in 2010, and nearly triple the 3.9 million guns made in 2000, according to the Bureau of Alcohol, Tobacco, Firearms, and Explosives. (Here is a look at which Americans own the most guns.)

As American gun manufacturing surged in the last two decades, estimates of civilian-owned firearms in the United States have topped 430 million, according to the Firearm Industry Trade Association. And data from the ATF shows that the $70.5 billion-a-year firearm industry is dominated by only a handful of companies.

24/7 Wall St. reviewed the ATF’s National Firearms Commerce and Tracking Assessment report to identify America’s top firearm companies. Companies are ranked by the total number of firearms produced and distributed in the United States from 2016 to 2020. Combined, the 10 companies on this list account for 70% of the 47.7 million firearms produced domestically by licensed manufacturers from 2016 to 2020.

Handguns – semi-automatic pistols in particular – have surged in popularity in the United States in recent years. Excluding revolvers, handguns have been the most widely-produced firearm type in the U.S. nearly every year since 2010, with domestic production numbers multiplying from 1 million in 2000 to 5.5 million in 2020.

Several companies on this list appear to have benefited from this trend. America’s top three firearm brands – Smith & Wesson, Ruger, and Sig Sauer – make more pistols than any other firearm type. For Glock, another company on this list, pistols are the only firearm type manufactured in the United States. These four companies, with business models that lean heavily – or exclusively – on handgun manufacturing, account for over 45% of all domestic firearm production. (Here is a look at America’s top pistol companies.)

Though pistols are now the firearm of choice in the United States, for some of America’s top gun makers, rifles still make up the bulk of their business. Mossberg, meanwhile, is the only brand on this list that produces more shotguns than any other firearm type.

Click here to see the biggest gun makers in America.