The Airport Lounge Is Much Improved, if You Can Squeeze In

The airport lounge ain’t what it used to be.

Once seen as quiet retreats for businessmen on expense accounts looking to get some work done, lounges are now trying to serve a variety of purposes and, in the process, have become one more area of competition among the airlines and independent operators. Some lounges are offering spa treatments and expansive views of the tarmac, and most are upgrading their food options. A few have even added playrooms for families traveling with children.

With the robust economy, more passengers than ever are willing to pay to get into the lounges, said Gary Leff, creator of the travel advice website View From the Wing. And that has added to a problem: The clubs have become victims of their own success — at times too full to accommodate all who are allowed to enter.

International business- and first-class ticket holders have always been welcomed. But now, fliers can pay for a yearlong or sometimes a day pass. In addition, credit card companies like Citi, Chase and American Express have been offering lounge access as part of their airline partnership or premium credit card offerings. And, of course, with the economy still strong, more people are traveling.

The growth and improvement in airport lounges, Mr. Leff said, “is driven by consolidation in the airline industry and competition by both airlines and credit-card issuers for the business of premium customers.”

Carriers and independent lounge providers have been investing significant amounts of money in their airport clubs over the past few years and plan to continue to update them. United Airlines plans to open four new United Clubs this year and begin construction on two more. American Express is also adding to its Centurion Lounge collection and expanding some of its existing ones.

Alaska Airlines is spending $50 million over the next few years to refresh and expand its lounges, including new ones in New York and San Francisco. The airline also just opened a third lounge in Seattle’s airport, its biggest yet, in response to the growth in that airport’s traffic — to 50 million passengers in 2018 from 30 million in 2010.

Delta Air Lines is opening five new lounges and expanding 18 others this year and next. “Lounges are a strategic investment in our premium customers,” said Sandeep Dube, senior vice president of customer engagement and loyalty. “We want them to be a reason people pick Delta to fly.” 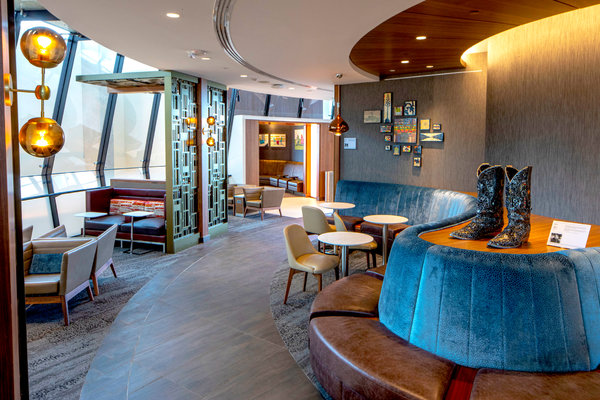 Alexander Dorow, director of United’s premium services, said airport lounges should “organically address a plethora of purposes.” Some travelers want to come in for a quick bite and to charge their devices for a few minutes, while others are there to work or relax for an hour or more before their flight, Mr. Dorow said. A new lounge can cost more than $10 million, he said, and must be designed for flexibility, able to evolve over a decade as customers’ needs change.

Some of the older spaces that haven’t been updated lack the basics that travelers are looking for — comfortable seating, good food, available power outlets and strong Wi-Fi.

Frequent fliers like Sarah Howell, who writes the Road Warriorrette business travel blog, says she knows which airports have clubs that are worth visiting and which she should pass by. She said she would rather pay for “real food in a restaurant and good wine,” when the lounge offerings were subpar.

Mr. Dorow said the lounges are being customized for their locations and the fliers they serve. A lounge in a busy hub like Chicago, where more people will be dashing in briefly between flights, will have different elements than a lounge in a vacation destination like Hawaii, he said. Lounges for customers departing on long international flights have traditionally been more plush, and United’s Polaris spaces include sit-down dining rooms and private day beds.

The airlines have also been displaying local art and offering food choices that reflect the clubs’ location. Delta’s lounge at Reagan National Airport outside Washington features a custom chandelier made to look like branches of a cherry blossom tree. Alaska’s new airport clubs feature local beers.

Lounges are following wellness trends as well. Healthier food, quiet relaxation areas and even short spa treatments are starting to pop up. These are generally free of charge. The travel and food writer Jodi Ettenberg, who writes the blog Legal Nomads, has celiac disease and has noticed that some lounges have started carrying and labeling gluten-free foods for diners with allergies and other restrictions.

Designers are paying more attention to family travel, and some are creating playroom spaces. These seem to be as much for small children who need to romp as they are to keep noise levels down for other travelers.

The investments are digital as well. In April, American Express bought Lounge Buddy, a website and app that offers airport lounge reviews and information, and sells day passes. Delta is rolling out biometric sign-ins with fingerprint readers at its Sky Clubs.

The downside to the lounge improvements is that they can lead to capacity problems. Customers who might have gone straight to their gate now might stop in Delta’s lounge at Kennedy Airport in New York to watch planes from the outdoor deck or go into American’s Admirals Clubs if they are offering free avocado toast that morning, Mr. Leff said.

Some of the crowding can be traced to the partnerships that allow some airlines’ passengers to use other carriers’ lounges, Mr. Leff said.

Ms. Howell said the busy lounges are “mirroring what’s going on in the terminals.”

Alex Judson, Alaska Airlines’ manager of alliances and lounges, said the number of travelers entering the company’s lounges increased 17 percent between 2017 and 2018.

Mr. Dorow, of United, said crowding is an issue the airline is taking seriously and addressing in multiple ways, including redesigning its use of space and evaluating its partnerships. Delta Air Lines’ website states that “access to the Club is in higher demand than ever,” and that it will be adding about 1,300 seats to its lounge network this year as well as imposing new restrictions on access.

American, Delta and United have all announced that a same-day boarding pass for travel on the airline or one of its partners would be required for entry to a club. In the past, yearlong pass holders could stop by, even if they were flying on another airline that day.

Some lounge providers are increasing the price or reducing the availability of day or guest passes. American Express Platinum Card holders are now limited to two guests rather than two guests or immediate family, and travelers without a Platinum Card or the more expensive Centurion Card can no longer buy day passes.

At busy times, some customers are often asked to wait outside for a few minutes or not granted access. In some cases, tiered entry rules are put into effect so an international premium cabin ticket holder or club member would still be allowed entry while a Priority Pass cardholder would only be allowed in if there was space.

“That makes people rethink the value of the card they paid for,” Ms. Howell said.

Even as the lounges are getting a face-lift, the airports are improving their spaces. Harriet Baskas, who writes about airports for her blog, Stuck at the Airport, said she has seen more terminals and gate areas being upgraded and new restaurants opening.

Still, she said, if there’s a great lounge at an airport she’s flying out of, “I show up an extra hour or two early.”

Lates News:
2019-07-22
Previous Post: Explainer: What it would take for Congress to impeach Trump
Next Post: Take a look inside the ultimate dream vacation home for both adults and children