A surge in demand in Tesla shares has seen it become the first stock market-listed carmaker to secure a $100bn (£76.1bn) value in the US.

Shares of the California-based electric car company, founded and run by Elon Musk, have more than doubled over the past three months as investors increasingly see it as leading the way to an electric car future.

That is despite several, and often controversial, bumps along the road to this point.

The company was already worth more than Ford and General Motors combined when its stock topped $573.2 in early US trading – a rise of almost 5% on the day – meaning it had crossed the value threshold. 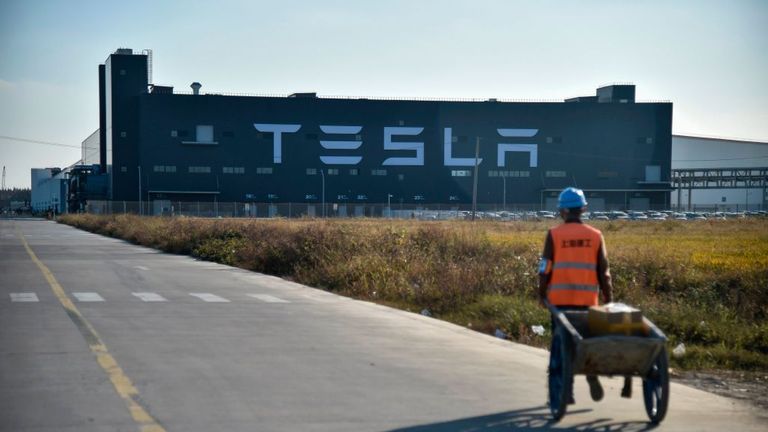 Traders have put the rally down to a better than expected performance in key areas that was announced in October.

Since that time, it has also been supported by a wider surge in US stock market valuations.

They have been setting record highs almost by the day – aided by factors including lower US interest rates and a thawing in the US-China trade war.

In October, Tesla reported rare profits – of £143m for the third quarter of the year following steep losses over the previous two.

There was also an acceleration in production and deliveries with Musk reiterating a pledge that the company was on track to deliver a total of 360,000 cars across 2019 as a whole.

The share price growth on Wednesday was part-explained by the publication of a bullish brokerage report for earnings in the final quarter of the year.

Tesla is due to outline how it performed on 29 January.

The market value milestone also moves Musk a step closer to earning the first $346m of stock options available to him as part of a share price-linked bonus plan.

Under the arrangement, Tesla’s $100bn valuation needs to stay for both a one-month and six-month average in order to trigger the vesting of the first instalment.

Such a windfall could potentially see him revive an ambition to take Tesla private. He already owns 22% of the company’s shares.

He got into regulatory trouble in 2018 when he tweeted that he had “funding secured” to complete a buy-out.

It resulted in Musk having to agree curbs on his Twitter posts and end his dual chairman role under measures to prevent market sensitive information reaching the public domain inappropriately.

The share price trajectory suffered a wobble in November when the launch of Tesla’s first pickup truck did not go to plan.

The test vehicle’s unbreakable windows were twice shattered during a demonstration.

However Musk went on to reveal a growing order book for the futuristic-looking electric model – helping to calm investor nerves.

Expert Says New Blockchain Regulation Should ‘Nudge’ Rather Than Push

How To Bet Using Bitcoin

Trader Who Nailed Bitcoin's $3,000 Bottom Fears More Downside is Near

Bitcoin Just Signaled "Sell" And It's Vulnerable to a Massive Correction

Paxos, a New York-regulated financial firm and the issuer of a USD-pegged stablecoin, has launched its blockchain-based settlement platform. After announcing Paxos Settlement Service in […]

Crypto Accused of Facilitating Illegal Gambling — What Are the Odds?

Last week, a report claimed that cryptocurrency-based illegal gambling has surged in many parts of Asia owing to the rise of this novel asset class […]

HSBC to Drop 35,000 Jobs and Invest in Digital Finance

Why is humanity so reluctant to save itself from climate change?

Mum saves incredible £10,800 with simple cooking trick – and anybody can do it

Bloomberg struggles in #MeToo era with 2020 campaign under a microscope