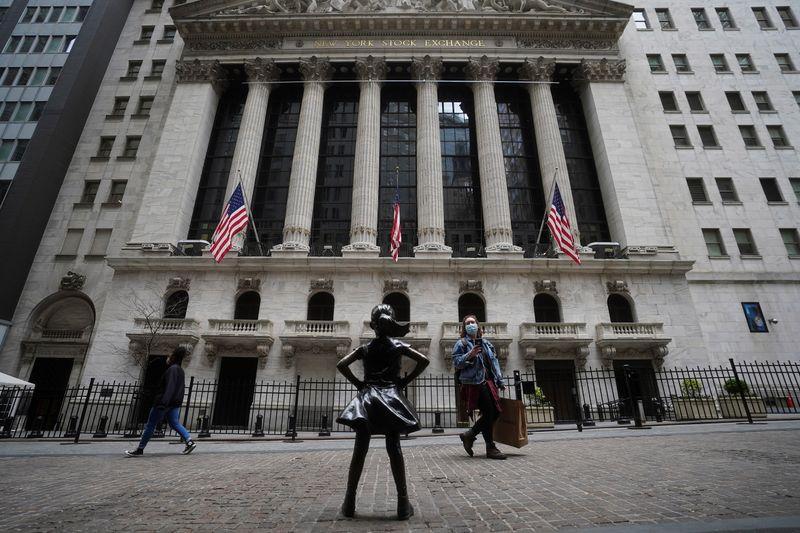 (Reuters) – The Nasdaq and the S&P 500 hit new highs on Wednesday, helped by a rally in technology-heavy growth stocks, while investors awaited minutes from the Federal Reserve’s meeting after the central bank took a more hawkish tone last month.

Mega-cap technology names Facebook Inc, Alphabet Inc, Amazon.com Inc and Apple Inc gained between 0.1% and 1.5%, providing the biggest boost to the S&P 500 and the Nasdaq.

Eight of 11 major S&P sectors rose in early trading, while energy and financials extended declines from the previous session.

Wall Street has been concerned over higher inflation, with investors moving between economy-linked value stocks and growth names in the past few sessions.

The S&P 500 growth index is now up 16.6% for the year against a 14.8% rise in its value counterpart, outperforming the latter after more than five months of underperformance.

“There’s more to go for value stocks but not yet. They need renewed confidence in the economy and higher interest rates to have sustained leadership,” said Bob Doll, chief investment officer at Crossmark Global Investments in Houston, Texas.

A fall in yield on the U.S. 10-year notes to a new 4-1/2-month low also boosted the fast-growing tech stocks as their value rests heavily on future earnings, which are discounted more deeply when bond returns go up.

Minutes from the Fed’s latest policy meeting, due at 2 p.m. ET, is expected to offer clues on how the U.S. central bank may begin to pare its large bond-buying program amid signs of quickening economic recovery.

“Everybody will be looking into them (minutes) to see when this tapering might start, particularly after the hawkish tone from the meeting itself,” said Chad Oviatt, director of investment management for Huntington Private Bank in Columbus, Ohio.

China’s market regulator said it has fined a number of internet companies including Didi Global, Tencent and Alibaba for failing to report earlier merger and acquisition deals for approval.

The S&P index recorded 52 new 52-week highs and no new low, while the Nasdaq recorded 56 new highs and 63 new lows.