The weekend attacks on Saudi oil infrastructure came as a resilient stock market already faced a test of how long it could remain in an uncommon "sweet spot."

This sweet spot started in the bitterness of an August market when investors were given a taste of recession worries crystallized by a relentless drop in Treasury-bond yields.

In the past few weeks, though, the S&P 500 has waged a steep 6% rally, pulling within 1% of its late-July record high by Friday's close, driven by the furious reversal of an overdone 'fear trade' in August.

Yields fell too low for investors' comfort, stock valuations stretched to extreme lows versus bonds, cyclical stocks collapsed compared to defensive ones and investor sentiment fell to profoundly depressed levels for a mere 6% pullback in the main indexes.

Bond yields have since reversed higher from panic levels – but aren't yet high enough to pinch off economic growth or undercut equity values.

The 10-year Treasury closed at 1.90% Friday before slipping following the Saudi attack and oil-price surge. This left stocks back to levels from the end of July with yields still a bit lower, flattering equity valuations and allowing companies to lock in cheap new debt in a generous credit market.

Investor sentiment has lifted from a depressed state – but isn't dangerously complacent quite yet. The CNN Fear & Greed Index, which uses market-based risk-appetite gauges, has surged from the extreme lows cited here two weeks ago.

This remains a net positive, though rallies this year have had trouble barreling to significant new highs and taking investor spirits to outright optimism, failing to reach escape velocity. So the interplay of market action and speculative juices bears close watching. 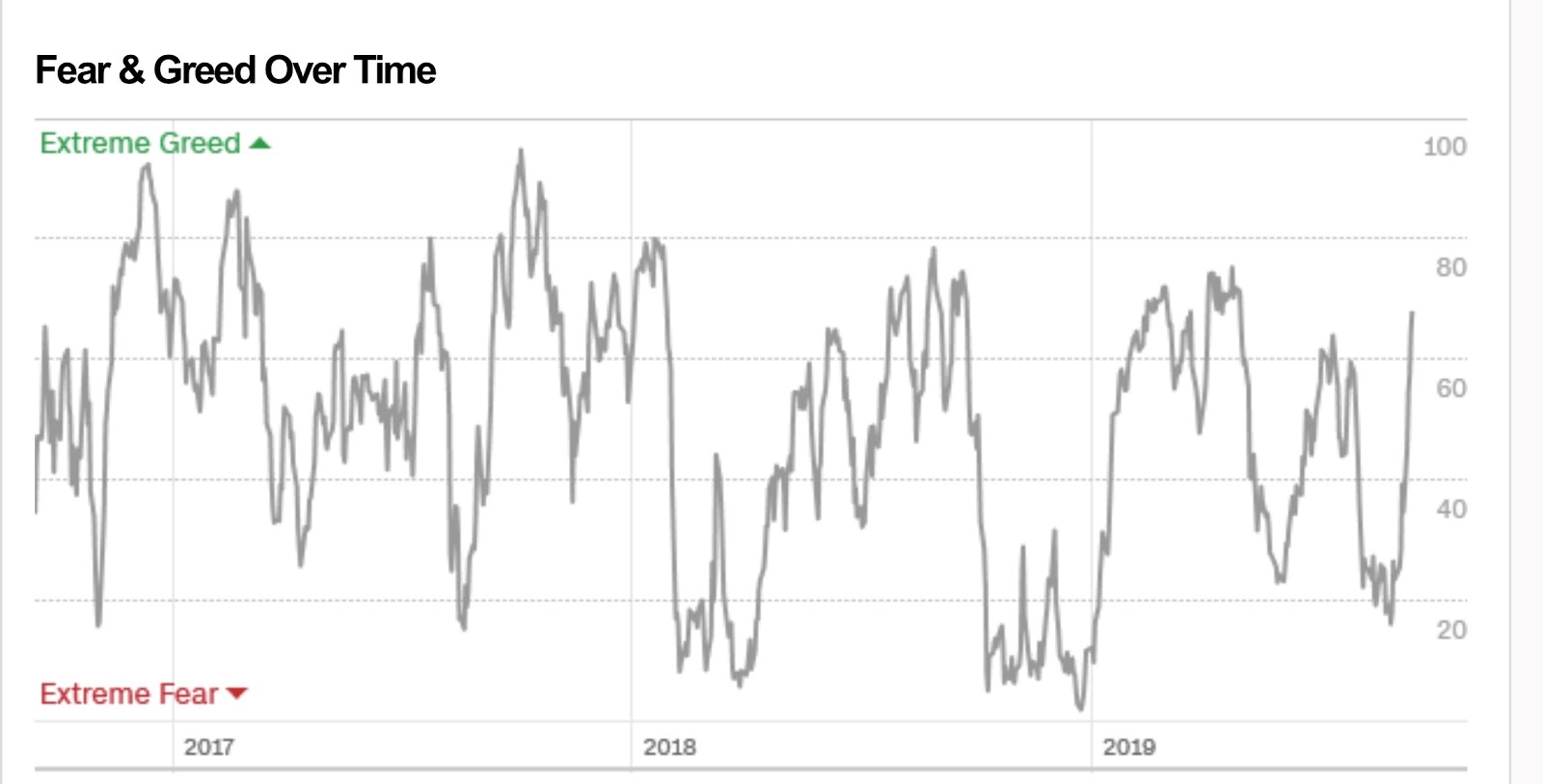 Trade relations with China have thawed a bit, with tariffs delayed and a meeting set for next month. But a full deal seems not yet priced into stocks. This has been a sweet spot for the trade issue – no high hopes for an imminent agreement but a vague prospect of progress hovering on the horizon.

Even the spike in world oil prices could simply take crude to a somewhat benign middle ground. West Texas Intermediate entered the weekend in the mid-$50s, just a few dollars above the 2019 lows, and it was above $65 as recently as late April.

Consumers can absorb such prices without too much trouble, and a supply disruption raises prices for U.S. producers already pumping at a high rate. Higher crude prices could even firm up the corporate-credit markets further, given than marginal oil-and-gas producers are heavily represented among the sketchier junk-bond issuers.

And U.S. economic activity has proven resilient, based on retail sales and labor indicators reported in recent weeks – without accelerating in a way to prevent a Fed quarter-point rate cut this week that the market has fully baked into interest-rate futures prices.

Still, the Fed meeting has plenty of wary eyes on it, in part because the past two significant market pullbacks, in May and then late July, began just after the S&P 500 had rallied to slight record highs into a meeting at which the Fed largely met investor expectations.

So this could be a test for a tape that has earned the benefit of the doubt by bending in August without breaking, and resuming an uptrend with a relatively broad rally.

The manner in which it did so has drawn a lot of commentary, with good reasons. Last week saw one of the most violent rotations among sections of the market clustered by their investment characteristics or "factors." The lift in bond yields from multi-year depths was the trigger for a massive rush out of momentum, growth, large and defensive stocks and into laggard, value, smaller and cyclically geared ones.

This chart from Bespoke Investment Group shows the performance of stocks last week grouped by their year-to-date performance entering their week.

On one level, this has been a net positive for the market, alleviating massive divergences; cooling off overheated stocks without breaking their long-term uptrends; and lifting the beaten-up stocks more than the former leaders have lost.

Yes, this was largely the messy, mechanical repositioning of systematic investment vehicles that had overdone the "risk-off" trade and had to scramble to unwind it, and not so much the studied reassessment of the economic probabilities.

There were signs this activity peaked early last week. But if not and there are more such waves of money in urgent motion destabilizing portfolios.

So, as with so many of the other themes running through this market, the quicksilver rotation of September is a boost to the market, unless and until it goes to an extreme in a hurry.