LONDON (Reuters) – A major global share index hit its lowest level in a month on Wednesday after U.S. manufacturing activity tumbled to more than a decade low, sparking worries that the fallout from the U.S.-China trade war is spreading to the U.S. economy. 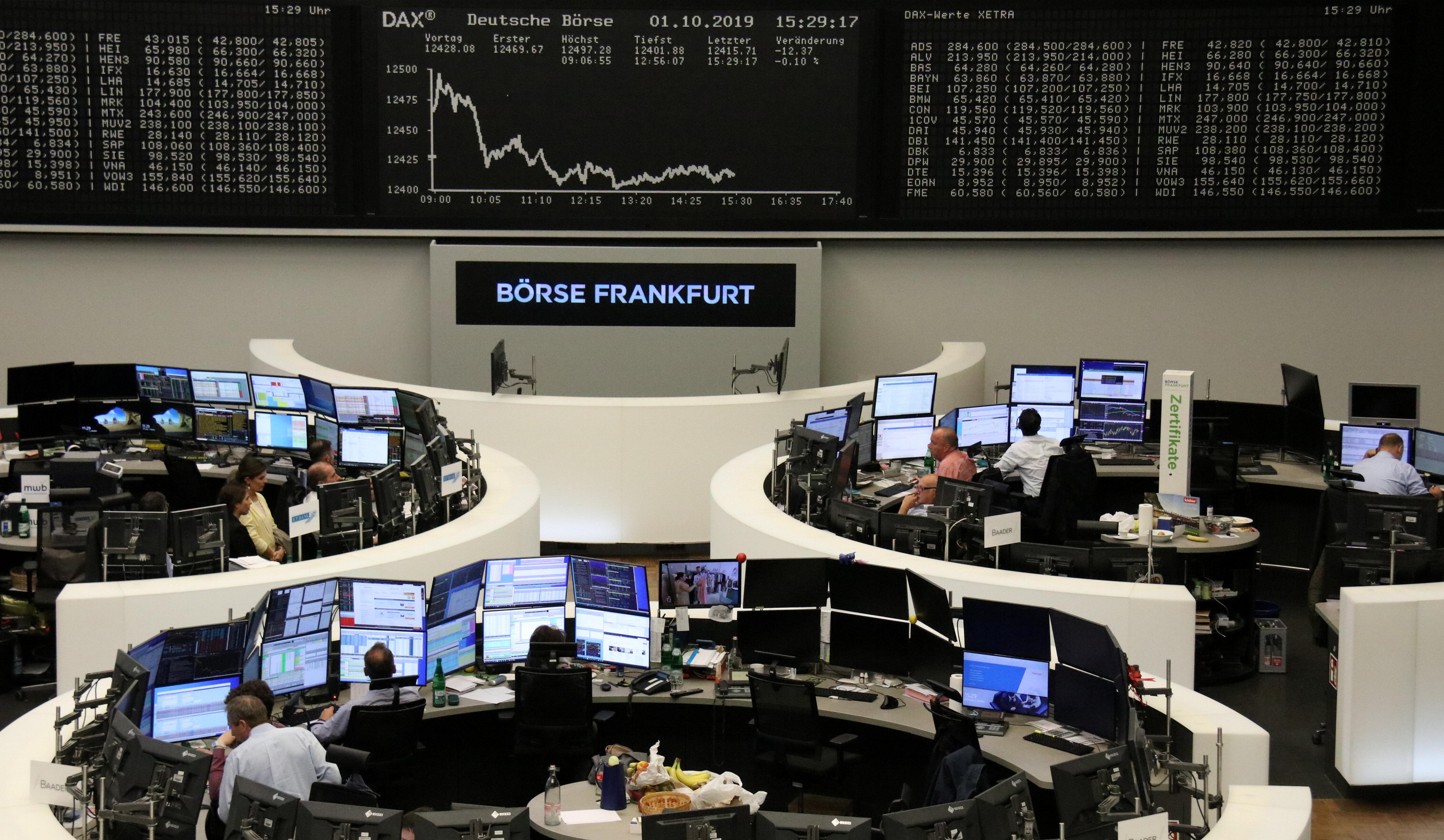 The dollar .DXY steadied, having earlier been knocked off its highest levels in more than two years following the data. The index that measures the greenback against a basket of peers was up 0.16%.

A slowdown in U.S. economic growth would remove one of the few remaining bright spots in the global economy and come just as Europe is seen as close to falling into recession.

European shares opened lower, with London stocks lagging the most on fresh Brexit drama. The pan-European STOXX 600 index was down almost 1 percent.

The FTSE 100 index .FTSE slipped 1.5%, the largest drop across European regions and ahead of UK Prime Minister Boris Johnson’s talks with Brussels as he prepares to announce his final Brexit offer.

Adding to investor anxieties, European companies looked set for their worst quarterly earnings in three years as revenue drops for the first time since early 2018, according to the latest Refinitiv data.

“Our base case is that trade tensions will remain elevated, and we expect global growth to slow in 2020 to its slowest pace since the global financial crisis,” said Mark Haefele, chief investment officer at UBS Global Wealth Management.

“We don’t rule out a worsening of the trade situation over the next six to 12 months.”

Hong Kong’s Hang Seng index .HSI was down 0.3% after a market holiday the previous day. The index fell as much as 1.2% in early trade. On Tuesday, Hong Kong police shot a teenage protester, the first to be hit by live ammunition in almost four months of unrest in the Chinese-ruled city.

Adding to tensions in Asia, North Korea carried out at least one more projectile launch on Wednesday, a day after it announced it will hold working-level talks with the United States at the weekend.

On Wall Street on Tuesday, the S&P 500 .SPX lost 1.23% to hit four-week lows. Selling was triggered after the Institute for Supply Management’s (ISM) index of factory activity, one of the most closely watched data on U.S. manufacturing, dropped to the lowest level since June 2009.

Markets had been expecting the index to rise back above the 50.0 mark denoting growth.

“Historically, equity returns are worst when the ISM manufacturing drops from levels below the 50 threshold,” Patrik Lang, head of equity research at Julius Baer.

“Uncertainty around the US-China trade war is obviously the main reason for the weakness, with companies exposed to global trade increasingly putting off investment decisions.”

The poor data lifted the Fed funds rate futures price sharply, with the November contract FFX9 now pricing in about an 80% chance the U.S. Federal Reserve will cut interest rates on Oct. 30, compared to just over 50% before the data.

U.S. President Donald Trump once again lashed out at the Federal Reserve on Tuesday, saying the central bank has kept interest rates “too high” and that a strong dollar is hurting U.S. factories.

It is another question, however, whether the Fed will cut interest rates as hastily as Trump, and financial markets, want.

The Australian dollar fetched $0.6693 AUD=D4, having hit a 10-1/2-year low of $0.6672 the previous day after the Reserve Bank of Australia cut interest rates and expressed concern about job growth.

The weak U.S. data pushed oil prices to near one-month lows, although a surprise drop in U.S. crude inventories helped them to rebound. [O/R]