(CNN)General Motors unveiled a new battery-electric pickup truck, the Chevrolet Silverado EV, during the Consumer Electronics Show. Although it shares its name with the popular gasoline-powered Silverado pickup, this Silverado is a completely different truck with a distinct design and major features not found on the internal combustion-powered models. 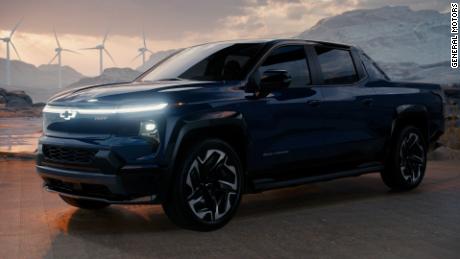 GM’s says the truck will go into production in spring 2023, about a year later than the Ford F-150 Lightning, an electric truck from GM’s biggest pickup competitor. While the Lightning looks very much like an F-150 — including having a faux “grille” design on the front — GM’s Silverado EV will look much less traditional. Though not as radical a design as Tesla’s prismatic Cybertruck, it’s evident at a glance that the Silverado EV isn’t like other Chevy pickups.

The Silverado EV has a smooth front with no grille, since electric motors and batteries require much less cooling than an internal combustion engine. Diagonal wings slant down from the sides of the passenger compartment to the sides of the cargo bed. They help with aerodynamics, said Ryan Vaughan, design director for the Silverado EV. Also, the passenger compartment can be equipped with a back wall that folds down to create enough space to carry items up to nearly 11 feet long in the bed. 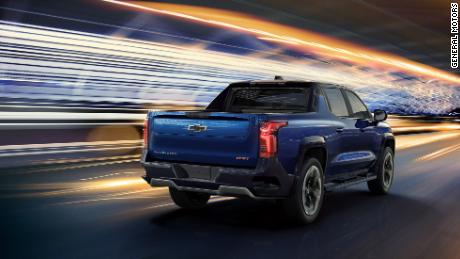 The Silverado EV shares the same basic electric vehicle engineering that underlies other new and planned GM electric vehicles, such as the GMC Hummer EV and the Cadillac Lyriq SUV. Some versions of the Silverado EV will be able to travel up to 400 miles with fully charged batteries, according to GM. That’s 100 miles further than the maximum range available in the Ford F-150 Lightning pickup.
The truck will be available in versions capable of producing as much as 664 horsepower and up to 780 pound feet of torque, a measure of pulling power. That’s more horsepower and slightly more torque than Ford’s electric truck. By comparison, a gasoline-powered Silverado truck with a big 6.2-liter V8 engine produces 420 horsepower and 460 pound-feet of torque. 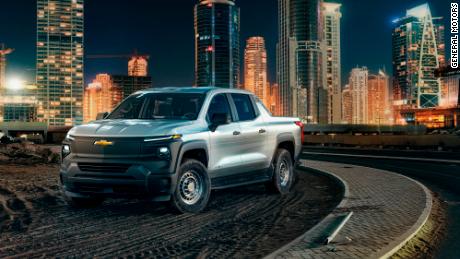 Despite all that power, the Silverado EV still has somewhat less towing and cargo-hauling capability than a Silverado with the big gas engine. The Silverado EV can tow up to 10,000 pounds and carry up to 1,300 pounds of cargo, while the 6.2-liter Silverado can tow as much 13,000 pounds and carry up to 2,100 pounds in its bed, according to GM. That’s largely because of the added weight of the Silverado EV’s batteries, according to GM. GM executives said versions of the Silverado EV with more power, capable of towing up to 20,000 pounds, would be available later.
The Silverado EV unveiled during CES had a 5-foot, 11-inch cargo bed. It also had the “Multi-Flex” tailgate available on today’s gas-powered Silverados. The complex tailgate has various extensions that can be opened or unfolded to allow for carrying longer cargo or for use as steps. The rear wall of the truck’s passenger cab can also be folded down creating an opening into the bed, which is similar to a feature on the Chevrolet Avalanche, an SUV-like truck GM offered until 2013. The back wall can open entirely or just in sections. 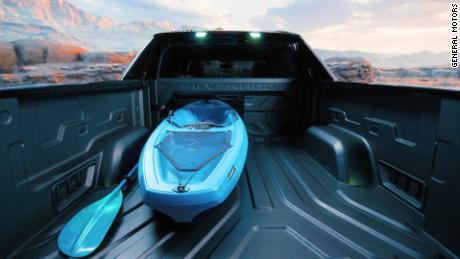 Like other EV pickups such as the F-150 Lightning and Rivian R1T, the Silverado EV has a large front trunk, or “frunk” as it’s commonly known. The E-Trunk — GM’s name for it — also contains various power ports and plugs to power equipment. Counting plugs in the front trunk and the bed, the Silverado EV could be equipped with up to 10 power outlets, a similar tally to Ford’s electric truck. Besides powering equipment, the Silverado EV can also be used to charge up other electric vehicles, which Ford’s truck can also do.
The Silverado’s frunk opens all the way down to the front bumper, similar the front opening on Ford’s Lightning pickup. That makes it easier to load and unload cargo, or even to use the frunk as a work desk. Rivian’s frunk, by contrast, is essentially a large hole under the hood which requires items be lifted up high to be put in or removed from it.
Besides being available with four-wheel-drive the Silverado EV will also offer optional four-wheel steering. By turning the back wheels in the opposite direction from the front wheels, this allows the truck to make tight turns at low speeds. This is another feature that GM had offered on gas-powered pickups in the past that has reappeared on the Silverado EV.

The Silverado EV will initially be available in two vastly different versions. The Silverado EV WT, which stands for Work Truck, will be a fairly bare-bones truck intended for commercial fleet customers. GM says it will go into production in the spring of 2023 at prices starting at about $40,000. It won’t be available with the fold-down rear cab wall and it will have a matte black front end where a grille would ordinarily be. A few months later, GM says it will start production of fully optioned Silverado RST trucks with prices starting at over $100,000. A more off-road capable “Trail Boss” version will also be available later, GM CEO Mary Barra said in a presentation.
According to GM, other versions of the truck, with prices in between these extremes, will come later.
Source: Read Full Article