More dads are choosing to stay at home with their kids. Will Covid-19 accelerate this trend? 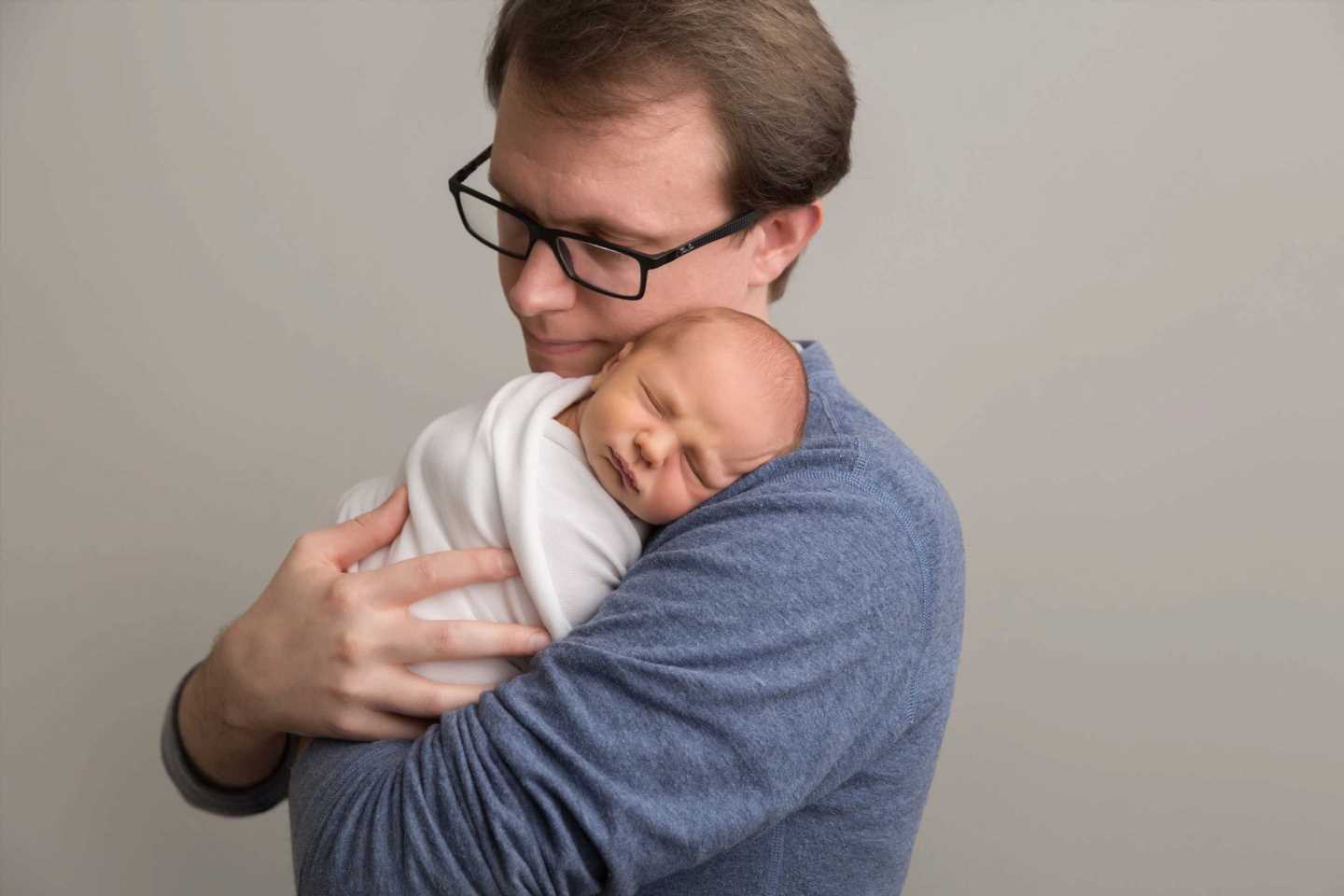 Growing up as a latchkey kid, Chris Hughes says the idea of being a stay-at-home dad was always appealing to him when he thought about life as a parent.

"Both of my parents were working professionals and that kind of influenced my decision to want to be a stay-at-home [dad] when I had children," Hughes tells CNBC Make It, "because it was difficult as a child to have both parents always at work and to be alone."

That's why, when Hughes and his wife Jennifer had their first child six years ago, he opted to leave his job as a chef while his wife completed medical school and became a physician.

Now, as a stay-at-home dad with a 6-year-old and a 2-year-old, Hughes, who is based in Woodbridge, Connecticut, is part of a growing number of fathers who are challenging gender norms by being stay-at-home parents.

Why more dads are staying home

While it's unclear how many men have made the transition to full-time parenthood during the pandemic, the long-term trend shows a rise of stay-at-home fathers, though they are still a minority. In 2016, dads made up 17% of all stay-at-home parents in the U.S., up from 10% in 1989, according to Pew Research Center.

"If we look at public polling data, it's absolutely clear that men's hours of child care and housework have increased quite a bit over the last several decades," says Scott Melzer, professor of sociology and chair of women's, gender and sexuality studies at Albion College. "It still pales in comparison to how many hours women are putting in, but the culture has shifted."

Fathers are doing more in the home for several reasons, including women's increasing advancement at work and in education, as well ongoing shifts in economic trends. In 2010, following the Great Recession, Pew reports that a high of 2.2 million fathers were stay-at-home dads in the U.S. likely due to an increase in unemployment.

"In the aftermath of the Great Recession, we saw the share of all stay-at-home parents go up by several percentage points to about 29%," says Pew Director of Social Trends Research Kim Parker. "And that was mainly because they were having difficulty finding a job."

As the economy improved, Parker says the number of all stay-at-home parents dipped to about 25% in 2019. "We don't know yet what impact the Covid-19 recession will have on these trends," she explains. "But based on what we saw during the Great Recession and the increase in the share of parents who were unemployed, we might see something similar here…as we've seen both mothers and fathers lose jobs and move out of the labor force."

While the pandemic has had a disproportionate impact on women, and mothers in particular, men have not been exempt from experiencing job loss or leaving the workforce over the past year. Between February 2020 and April 2021, nearly 1.6 million men left the labor force, according to the National Women's Law Center. By comparison, nearly 2 million women left the labor force during the same time period.

But it's not just the economy. A rising number of fathers are choosing to stay home specifically to care for their families. In 2016, 24% of stay-at-home dads said caring for their family was the main reason they were at home, as opposed to other factors like unemployment or a personal illness. That's up from just 4% in 1989, according to Pew. By comparison, 78% of moms said they were at home specifically to care for family, down from 86% in 1989.

"Part of the change we've seen is attributed to the fact that many more mothers are working outside of the home now," Parker says.

In 1950, women accounted for about one-third of the total labor force, according to the Bureau of Labor Statistics. By early 2020, women made up a little more than half of the U.S. workforce, though the pandemic has now caused a decrease in their labor force participation rate.

Additionally, in 2017 41% of mothers were the sole or primary breadwinners in their family, meaning that a growing number of married women are out-earning their husbands. As a result, some dads who make less money than their spouse are opting to stay home in order to avoid the high cost of child care.

Currently, in 33 states and Washington, D.C., infant care is more expensive than college, according to the Economic Policy Institute.

Although more dads are choosing to become stay-at-home parents, societal expectations and gender stereotypes still impact how they are viewed by peers and family.

"A friend of my wife's told her that she cannot ever marry a man who's not working," says Andrew Cooke, a stay-at-home dad of eight years. "And it's almost soul-crushing because my job is here with me at home when I'm teaching [my son] in school and when I'm feeding him and bathing him and making sure he does his homework."

"A job does not always mean a paycheck," says Cooke. "A job, to me, means responsibility."

Shannon Carpenter, a stay-at-home dad of 13 years who wrote the book "The Ultimate Stay-at-Home Dad," says there is a misconception that being a man means being the breadwinner. The idea that "my masculinity is tied to my job is a myth," he says.

"There's this sort of tension between what's going on in the labor force and the achievements and advances that women have made in educational attainment… [and] then there are these societal attitudes that are kind of lagging some of those trends," says Parker. "And I think that's where some of the tensions and challenges come in for both mothers and fathers today."

To help stay-at-home dads overcome these challenges and connect with other like-minded fathers, former New York City teachers turned stay-at-home parents Lance Somerfeld and Matt Schneider created a NYC Dads Group in November of 2008. Somerfield, who had just become a stay-at-home dad around that time, says the idea for the group came after he and Schneider experienced feelings of isolation as the only fathers at the playground surrounded by other mom groups.

"Our co-founder Matt Schneider tried to join a local moms group in his neighborhood and they very politely said, 'You know, you seem like a really good guy, but the way the rules are for our group it's too uncomfortable,'" Somerfeld says. "And they didn't allow him into the group. And so we were really just looking for an inclusive place to figure out a way for dads to find community, to find our people and to mobilize."

Somerfeld says his NYC Dads Group has since expanded to 41 metropolitan cities across the country, and is now known as just the City Dads Group.

As the number of stay-at-home dads slowly starts to increase, experts are hopeful that a shift in expectations for moms and dads will take place.

While women still carry the brunt of child care and household responsibility, having more active dads in the home can create a more equitable division of labor and allow more women to be active in the workplace.

"I could have two kids during my medical school training and residency because I had a great support person who was willing to give up his career," says Hughes' wife Jennifer.

To help foster greater gender equality inside and outside the home, Melzer says policies need to be passed at "the federal level, state level and within organizations" that allow employers to provide moms and dads with equal opportunities to support their families.

"If we compare U.S. families with those of comparable nations in Europe, Scandinavian in particular, we find that the U.S. family leave policies are pretty meager," he says. "We provide up to 12 weeks of unpaid job protected leave and only to individuals in certain contexts like those who work for larger employers with 50 plus employees."

Currently, the U.S. is the only industrialized country without a federal paid leave policy. But advocates are hoping that will soon change as President Biden has proposed federal paid leave in his recently released American Families Plan.

In Sweden, where each parent is entitled to 240 days of paid parental leave, government leaders passed what Melzer calls a "use it or lose it policy," which made the previously shareable leave nontransferable between parents.

"That really pushed men out of the workforce and into the homes," he says. "So that structural policy change really led to a cultural shift, whereby it has become more acceptable for men to be stay-at-home dads."

A 2019 report, "The State of Nordic Fathers," found that 96% of fathers in Sweden not only said they felt capable of being caregivers but also that they wanted to be very active in the early years of their children's lives.

"So we can see from these models that if the United States wants to have similar changes to our gender, work and family arrangements and dynamics," says Melzer, "then we need to pass generous paid family leave policies."

Check out: Meet the middle-aged millennial: Homeowner, debt-burdened and turning 40

Women hit their peak earning years in their 40s: What does that mean for millennials sidetracked by the pandemic?