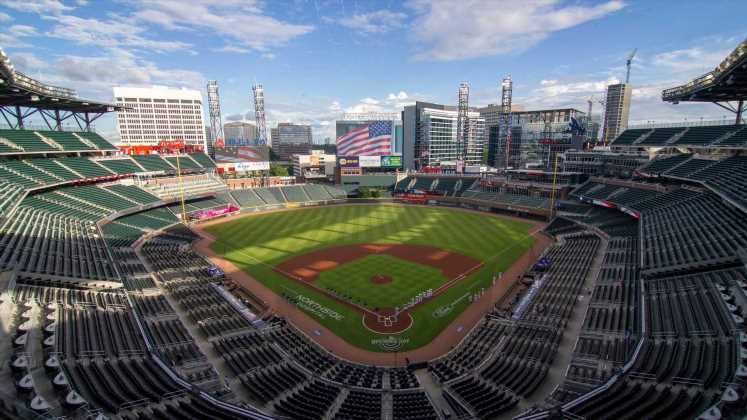 Major League Baseball will move its All-Star Game out of Atlanta after the state of Georgia passed voting bills that will disproportionately affect citizens of color, an action that commissioner Rob Manfred on Friday said is the “best way to demonstrate our values as a sport.”

MLB’s removal of one of its jewel events – which this year will include the draft for the first time – comes after a year in which the COVID-19 pandemic and the killing of George Floyd by a Minneapolis police officer caused the sports industry to reconsider its influence within society.

That recalibration was most felt in Georgia, where members of the WNBA’s Atlanta Dream organized against one of its owners, former Sen. Kelly Loeffler, and urged Georgians to exercise their right to vote.

On March 26, Georgia Gov. Brian Kemp signed legislation passed by both state houses a Republican-led overhaul of state elections, rolling back voting by mail and other absentee balloting efforts and even banning the distribution of food and water to those standing in line to vote.

President Joe Biden called the bill “sick” and “un-American” and on March 31 told ESPN he would support MLB moving its Midsummer Classic out of Atlanta.

Just more than three months before its stars were to gather July 13 for the 91st All-Star Game, Manfred did just that.

"Over the last week, we have engaged in thoughtful conversations with Clubs, former and current players, the Players Association, and The Players Alliance, among others, to listen to their views,” Manfred said in a statement.

“I have decided that the best way to demonstrate our values as a sport is by relocating this year’s All-Star Game and MLB Draft. Major League Baseball fundamentally supports voting rights for all Americans and opposes restrictions to the ballot box."