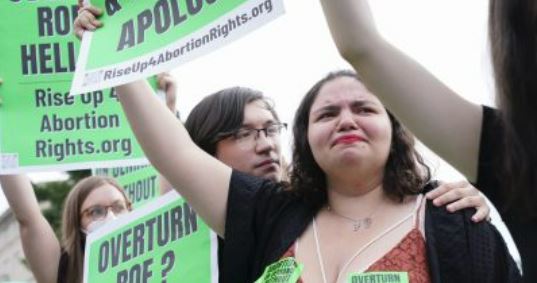 As reaction to the Supreme Court’s overturning of abortion rights in America sweeps the nation, Hollywood studios are focusing on the protection of employees’ access to health benefits, including travel. As of yet, they haven’t opined on the controversial decision by the conservative court.

A Warner Bros. Discovery spokesperson said the company is “committed to offering our employees across the country access to consistent and comprehensive healthcare services. In light of the Supreme Court’s recent decision, we immediately expanded our healthcare benefits options to cover transportation expenses for employees and their covered family members who need to travel to access abortion and reproductive care.”

“Paramount will support – as we always have – the choices our employees make about their own health care,” CEO Bob Bakish said in a note to employees Friday, running down a list of benefits that include “certain related travel expenses if the covered health service, such as abortion, is prohibited in your area.”

Disney executives also communicated directly with staff not long after the decision was released by the Supreme Court this morning, we hear, recognizing the impact of the ruling and committing to quality and affordable care for all staffers no matter where they live or if they need to travel.

Netflix said it already offers a travel reimbursement coverage for full-time U.S. employees and their dependents who need to travel for cancer treatment, transplants, gender affirming care, or abortion through its U.S. health plans. This is a $10,000 lifetime allowance per employee and their dependents per service.

NBC Universal parent Comcast declined to comment but we understand has a travel benefit for both Comcast and NBCUniversal employees that includes all covered medical services and procedures that aren’t available near an employee’s home.

Today’s ruling will lead to a wave of restrictions across the nation in states with so-called trigger laws or preexisting laws in place that can be easily activated or enforced. The Center for Reproductive Rights had calculated if the Supreme Court overturned Roe, as it has, abortion would remain accessible in twenty-five states and likely would be prohibited in twenty-five states and three territories — including Georgia, a key Hollywood production hub.

Hollywood Responds To Supreme Court Abortion Decision: “How Dare They?”

Netflix Axes Another 300 Staff, Taking Total Layoffs To More Than 450

Lates News:
2022-06-24
Previous Post: ‘Turning into Thatcher figure’ Boris Johnson a threat to Tories for ’20 years’ if removed
Next Post: Susan Collins Somehow Still Can't Believe She Got Played for a Fool by Trump's Justices