SHANGHAI — Here’s one way to compete with Starbucks in coffee: Pay your customers.

Luckin Coffee, an unprofitable start-up offering big giveaways and aggressive subsidies, burst less than two years ago into a Chinese coffee scene long dominated by Starbucks. Helped by a smartphone app that lets users order coffee for delivery with a few finger taps, it has gained nearly 17 million customers and built 2,370 stores.

Now it plans to sell shares in the United States, with trading set to begin on Friday. If successful, the unprofitable and still-untested company could be worth as much as $4 billion.

“You need to take some time for these companies to become profitable,” Ringo Choi, managing partner for China at EY, the consulting firm. “Not all will become the next Amazon and not all of them have the fundamentals to sustain them.”

Luckin offers proof that China’s weakened tech start-up scene still has some of its old pop.

In recent years, new Chinese companies have burst into prominence, raising and burning money at a pace that would make Silicon Valley blush. Bike-sharing start-ups popped up overnight, flooding cities with tens of millions of rainbow-colored dockless bikes. A boom in online food and retail delivery has left the streets of Beijing and Shanghai cluttered with delivery men in bumblebee yellow or blue helmets and suits, the colors of the two most dominant delivery companies.

Many of those companies have since scaled back, and some have flamed out, as China’s economy slows and financing for tech firms has begun to dry up.

Luckin hopes to buck that trend and challenge Starbucks as the reigning king of a tea-drinking country that only relatively recently discovered the joys of java. Starbucks, the Seattle-based coffee chain, holds just over half of the Chinese coffee and specialty tea market, according to Euromonitor International, a market research provider. By the end of 2018, Luckin held just over 2 percent of the market, according to Euromonitor estimates. 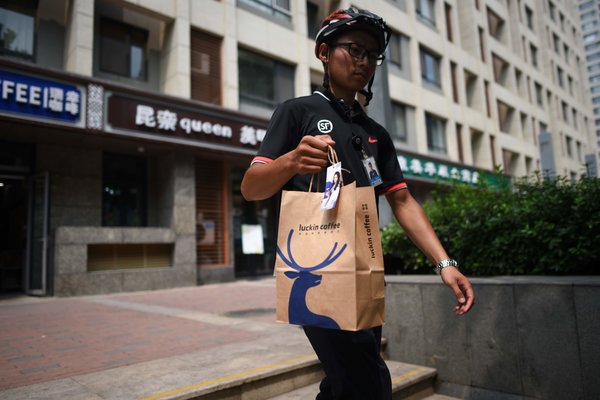 But the growth opportunities are huge. In the span of just four years, China’s specialty tea and coffee market has grown from $2.7 billion in revenues to $4.8 billion, Euromonitor says. The market is still diffuse, as well. The next biggest competitor to Starbucks, the McDonald’s owned McCafe, has just 5 percent of the market.

Luckin has grown rapidly since its founding in late 2017. It was begun by the entrepreneur Jenny Qian Zhiya and has been backed by several investment firms in China, the United States and Singapore, including BlackRock. It plans to increase its storefronts to have the largest coffee chain network in China by the end of this year. That would catapult it past Starbucks, which has 3,600 stores in China.

Sustaining that growth depends in large part on whether Luckin can keep its customers. On social media, some people rave about its cheap and convenient coffee. They praise it for coming up with specialty drinks that appeal to the varied tastes of Chinese consumers, like pink guava topped with cream cheese.

Others deride its taste and say its coffee is just an overpriced version of convenience store sludge.

Several times a week, Liu Zhiyan, 34, likes to walk over to the Luckin near her work to get a jolt of caffeine. “Luckin is not as good as Starbucks, the flavor is not so rich,” Ms. Liu said. She used to drink Starbucks once a week but has found herself buying coffee more frequently because Luckin’s coffees are cheaper.

A spokesman for Luckin declined to comment, citing a quiet period before the initial public offering on the Nasdaq Stock Market.

Luckin coffee is priced similarly to Starbucks coffee but then offers steep discounts. Most of its espresso-based coffees cost between $3.50 and $4, but customers rarely pay the full price because of daily discounts of 50 percent or more. Luckin gives away its first coffee to a new subscriber to its app. A friend referral to the app gets customers another free coffee.

Luckin also lures coffee drinkers with big promotions, resulting in huge sums of money going back into the pockets of customers.

One current promotion encourages customers to buy seven or more items in a week, either individually or within a group, putting them into a pool of similar customers. At the end of the week everyone in the pool will get a cut of 5 million renminbi, or about $723,000. Each participant in last week’s pool took home $4, the company said. Over the 10 week program, Luckin tells its customers, it will give them back more than $7 million.

Those offers would eat into Luckin’s profits, if it had any. Money spent on growth led the company to record a net loss of $475 million in 2018. So far this year, the company has racked up losses of $85 million.

Though they both sell coffee, Luckin and Starbucks approach the China market in different ways. Luckin depends heavily on takeout and delivery, a popular option in a country where people like to order meals on their smartphones. Luckin also runs small stores where customers can pick up their coffee, check out the latest discounts or learn about other offers.

Starbucks, by contrast, usually offers roomy stores known as a comfortable place to hang out, a refuge from prying parents or a crowded family apartment. Its green-and-white logo holds an aura of affluence in China, and the company has won intense loyalty among many people there.

“I have never gone to Luckin,” said Zhang Sheng, a recent college graduate who drinks coffee three times a week. “I am loyal to Starbucks because they have good loyalty program.”

Starbucks has its own expansion plans, with a goal of nearly doubling its China stories by 2022. Still, in a nod last summer to its new competitor, Starbucks announced a partnership with e-commerce giant Alibaba to provide delivery of its coffee through Alibaba’s subsidiary, Ele.me. Representatives for Starbucks did not respond to requests for comment.

The next big question for Luckin is how it can start making money. It is unclear whether customers who like Luckin’s discounted coffee will be willing to fork over the full price once those discounts are lifted.

For Owen Sun, a 31 year old who works in product placement for a luxury company, Luckin provides fast coffee when he is too busy to leave work. But he is a fickle consumer, and on a recent day was waiting in a long line at a Shanghai coffee shop called Manner.

“To be honest, Starbucks does a better job in packaging the coffee,” Mr. Sun said. “If the price of Luckin coffee went to $4 with no coupons, I might buy Starbucks.”