“I didn’t back down from my promises – and I’ve kept every single one,” Donald Trump told the Republican national convention in August as he campaigned for a second term. As the election nears, some of America’s hard-hit manufacturing workers are not convinced.

Shannon Mulcahy of Whitestown, Indiana, voted for Trump in the last election. This time his rival Joe Biden will get her vote. For 18 years she worked at the Rexnord steel bearings plant in Indianapolis before it shut down in 2017, moving operations to Mexico. Mulcahy was one of 300 workers who lost their jobs.

Trump publicly criticized the plant’s closure in 2016 and 2017, blaming the decision on the Obama administration and threatening to increase taxes on products made by companies like Rexnord in retaliation for moving jobs abroad. But in 2018 the company cited $55m in savings from US tax reform in the wake of Trump’s tax cuts in December 2017.

Mulcahy said she feels betrayed by the jobs promises Trump made throughout his 2016 election campaign. Since losing her job, Mulcahy has struggled with depression while trying to find other work. She’s managed to find a new job, though it pays significantly lower than what she was making at the plant.

“There are a lot of plant closings he could have stopped. He talked the talk everyone wanted to hear about saving jobs. I don’t see him saving any jobs,” said Mulcahy. “I think it’s all fake. It’s all a campaign thing. He’s telling people what they want to hear.”

Trump won the 2016 election in part with his promise to keep manufacturing jobs like Mulcahy’s in the US. A promise that helped him win former Democratic voters across the midwest’s manufacturing states.

Those promises have done little to turn around the long-term decline of manufacturing in the US. The US gained roughly 500,000 manufacturing jobs between 2016 and 2019, according to an analysis by the Economics Policy Institute. Trump’s trade wars hurt manufacturing but then came the coronavirus pandemic. Even after adding 66,000 manufacturing jobs in September, the sector is still 647,000 jobs short of where it was in February before the pandemic hit the US.

In the meantime, nearly 1,800 US factories disappeared between 2016 and 2018, including several high-profile plants throughout midwestern swing states that were key to Trump’s election win.

Few people have had such a close view of the decline of manufacturing in the US as Chuck Jones. Jones worked at the Rexnord plant in Indiana for over 40 years, and also served as president of United Steelworkers Local 1999, which represents workers at the Carrier plant in Indianapolis, Indiana, where Trump has repeatedly claimed he saved jobs from being outsourced to Mexico.

“We put up a hell of a fight as far as rallies, protests, and trying to get the word out. Trump picked up on it. He kept on mentioning Carrier during his campaign speeches and claiming if he was president, it wouldn’t happen,” said Jones.

“Almost four years into his term, he hasn’t proved at all he brought jobs back. There’s the biggest trade deficit with China in history,” added Jones. “People have to open their eyes up and realize he isn’t what he said he was. He’s had four years to prove it. Why in the hell would anybody vote for him again under those circumstances.”

In Burlington, Iowa, Robert Morrison was forced to take early retirement when the steam turbine factory operated by Siemens where he worked for over 30 years shut down and moved production overseas in January 2019. One hundred and twenty-five workers were laid off due to the closure.

“We reached out to President Trump and sent letters, emails, made phone calls. The White House official response to the email I sent was that this was a state or local matter and there was nothing they could do,” said Morrison. “We were abandoned and betrayed, not only by Siemens, but also by President Trump.”

On the day Trump was inaugurated, 20 January 2017, GM cut 2,000 jobs at its Lordstown plant in Ohio. The next year General Motors announced it would shut down its Lordstown plant for good as part of a plan to cut another 14,000 jobs in the US. The news came even as GM received a tax windfall of $157m in the first three months of 2018 due to Trump’s tax cuts, which Trump and the company had praised as a job creator. 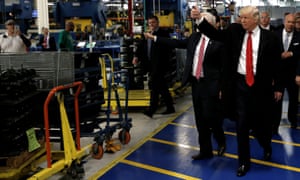 “Promises were made, promises were broken,” said Timothy O’Hara, a former UAW Local 1112 president and retired GM worker who worked at the plant for 41 years. “I ended up selling my house and moved to Kentucky. It was ironic that was what Trump said not to do, hundreds of members of UAW Local 1112 members who worked at the GM plant ended up having to do it because they moved all across the country to keep working with General Motors.”

In September 2020, during a campaign stop in Lordstown, Ohio, Trump falsely claimed the area’s economy was “booming”. Lordstown Motors, which bought the plant and is producing electric truck vehicles, is slowly rolling out job opportunities with plans to employ 500 workers by the end of 2020. GM’s Lordstown plant employed 4,500 people in 2017.

“They can talk about how it’s going to be something good for the Mahoning Valley, to the little extent it will be, but it won’t be the same as the jobs lost when GM closed that facility,” added O’Hara.

Chuckie Denison took early retirement when the Lordstown plant shut down, the third plant closure he experienced while working at General Motors for 20 years.

His fiancee, Cheryl, relocated to Tennessee to continue working for General Motors while Denison is currently trying to sell their house in Lordstown.

“My family is still split up,” said Denison. “So far Trump has done nothing but lie to the people around the midwest, the US, and the entire world about Lordstown.”