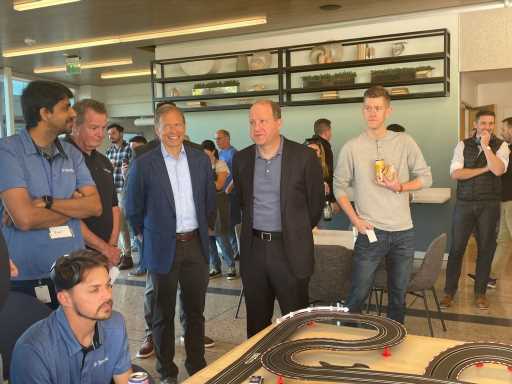 International industrial technology company Trimble officially relocated its headquarters to the Front Range on Thursday with the promise of new jobs.

Trimble, with its offices at 10368 Westmoor Drive, joins other tech companies such as TraceGains that have set up shop in Westminster along the U.S. 36 corridor.

Trimble’s technology has been used in several major developments in Colorado, including the U.S. 36 expansion, the rail project from Denver’s Union Station to Denver International Airport, the DIA runway and terminal. The company first arrived in the state in 2000.

“Trimble has been, is and will be such a strong and dynamic part of Colorado’s tech community,” said Gov. Jared Polis at the Thursday event. “After more than 20 years, we’re thrilled that you are deepening your roots in our state with the new headquarters.”

He credited Trimble’s technology with improving the efficiency of the agriculture sector, as well as the airline industry with its work at DIA.

“We really see the positive impact from their technology right here in Colorado, and now we’re going to have more good jobs that power those transformational changes,” Polis said.

The governor, who got his start as a tech entrepreneur, described the state’s industry as “very strong.” It employs more than 130,000 Coloradans, with “one of the strongest recoveries in the nation – more people employed today than before the pandemic in our great state.”

Polis pointed to companies from California, Texas and Florida that are attracted to the Centennial State as they look for “a better business environment, a better place to live, easier place to recruit talent.”

Trimble CEO Rob Painter said, while his company maintains a strong presence in California and Ohio, their Colorado location has the capacity to expand its talent pool.

“We will continue to grow,” he said. However, their team “might have a little bump of a recession in front of us to manage through.”

Trimble employs around 12,000 people who live in over 40 countries, with more than 1,000 residing in Colorado. Half of its business occurs outside of the U.S.

The company’s next goals include continuing to innovate and grow their markets, such as construction and agriculture. Painter also announced a large solar array project on its acreage in Westminster.