Next Digital founder Jimmy Lai on the state of Hong Kong.

Hong Kong media tycoon and pro-democracy activist Jimmy Lai said Thursday that police raided his private offices, months after he was arrested under a new national security law and the newsroom of his newspaper Apple Daily was also swept by hundreds of officers.

Speaking to local media before a court appearance Thursday, Lai said Hong Kong police raided his private offices and “took away everything.”

The founder of media company Next Digital, which operates pro-democracy newspaper Apple Daily, added that “police didn't wait for even lawyers before they took everything away."

In a statement, the Hong Kong Police Force confirmed that they had conducted a search operation inside an office in Hong Kong’s Kwun Tong district on Thursday, and that “some relevant exhibits were seized for investigation and no person was arrested today.”

The police said the search operation was related to ten arrests made in August under the national security law, on suspicion of colluding with a foreign country to endanger national security and conspiracy to defraud. The statement did not mention Lai by name.

US SUSPENDS EXTRADITION AND TAX AGREEMENTS WITH HONG KONG 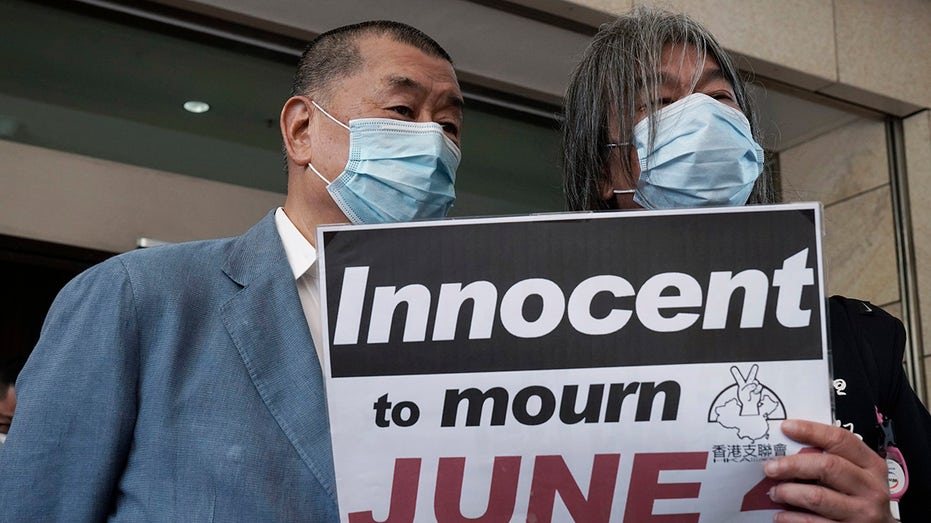 Lai was among those arrested in August, and headquarters of Next Digital were also raided the same day. He was later released on bail. Some staffers livestreamed on Facebook when the Apple Daily newsroom was being stormed in the early morning hours, and shares of Next Digital shares jumped by 1,100% over two days in August, as people bought to show their support for Lai, Bloomberg reported.

The raid came hours ahead of Lai’s court appearance Thursday to face charges of joining an unauthorized assembly on June 4. Lai and several other pro-democracy activists include Lee Cheuk-yan and Joshua Wong, were charged after they participated in a now-banned candlelight vigil marking China’s bloody Tiananmen crackdown in 1989. The vigil is held annually.

Simon said on Twitter that the police were “still trying to make civil disputes into criminal cases.” He said funds that Lai used to support Apple Daily were frozen.

The national security law, which outlaws subversion, secession, terrorism and collusion with foreign forces to intervene in Hong Kong’s internal affairs, has added to fears it will be used to silence dissent.

Pro-democracy supporters say the legislation effectively ends the “one country, two systems” framework under which semi-autonomous Hong Kong has been operating under since Beijing took over the former British colony in 1997.