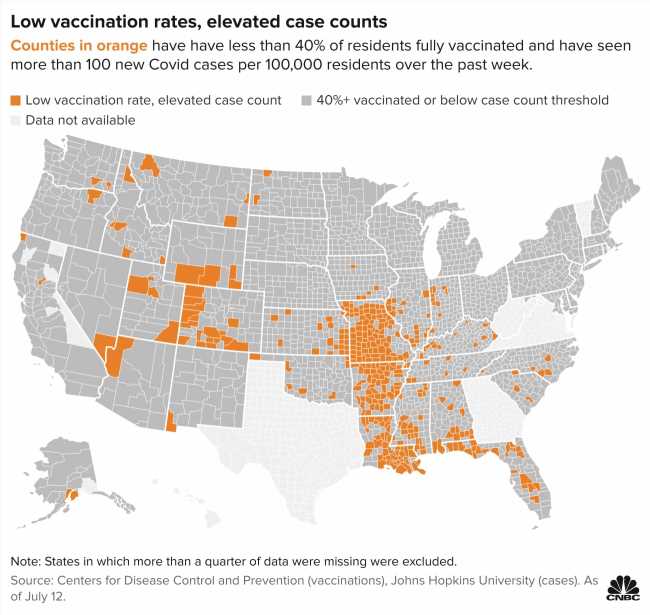 More and more U.S. counties with low vaccination rates are starting see Covid cases climb, putting residents at risk for "unnecessary" infections, hospitalizations and potentially deaths as the delta variant tears through the country, according to U.S. health officials.

"After several weeks of declining numbers of cases, followed by a long plateau, we are seeing an increase in the number of cases in many parts of the country now," Dr. Jay Butler, deputy director for infectious diseases of the CDC said in a call hosted by an industry group Tuesday. Hospitalization rates, which tend to lag confirmed cases, are similarly starting to climb, he said.

A CNBC analysis of U.S. vaccination rates and Covid cases shows there are 463 counties across the U.S. with high rates of infection — reporting at least 100 new cases over the last week per 100,000 residents — more than twice the U.S. rate. A majority of those counties, 80%, have vaccinated less than 40% of their 23 million residents, the analysis shows, according to data from the Centers for Disease Control and Prevention and Johns Hopkins University.

More than half of the counties in Missouri, Arkansas, and Louisiana have low vaccination rates and elevated levels of Covid cases, according to CNBC's analysis. Those three states are seeing some of the highest levels of cases per capita in the country over the past seven days amid a surge in spread of the delta variant in Southwest Missouri.

"There will continue to be an increase in cases among unvaccinated Americans and in communities with low vaccination rates, particularly given the spread of the more transmissible delta variant," White House coronavirus response coordinator Jeff Zients said at press briefing last week. Virtually all Covid hospitalizations and deaths, 99.5%, are occurring among unvaccinated people, U.S. officials say.

Indeed, nationwide cases are once again on the rise as the highly transmissible delta variant takes hold as the dominant strain in the U.S. The seven-day average of newly confirmed Covid cases has climbed to about 23,300 a day, almost double the average from a week ago, according to Hopkins data.

The rise of the delta variant has prompted officials in some states like Mississippi to issue new calls for masking and social distancing, especially among older and more vulnerable residents.

"When the Delta strain appeared (in Utah), it rapidly became the dominant strain, and by dominant I don't mean 50%. In the last full week of data, more than 80% of the sequence viruses were delta and so far this week it's 92% of all variants," Dr. Andrew T. Pavia, chief of the pediatric infectious diseases at the University of Utah School of Medicine, said on a call hosted Tuesday by the Infectious Diseases Society of America.

Long Covid? Soon there could be a test to show if you have it

Mississippi has administered at least one shot to just 37% of its population, ranking last in the country. Officials there asked people over 65 and immunocompromised residents to avoid any indoor mass gatherings for the next two weeks amid "significant transmission" of the delta variant over the coming weeks.

The Covid vaccines currently being used are proving to be successful in preventing severe disease, hospitalization and death from the delta variant, according to Dr. Rochelle Walensky, director of the Centers for Disease Control and Prevention.

Breakthrough infections are rare, and about 75% of the people who die or are hospitalized with Covid after vaccination are over the age of 65, according to the CDC.

"Preliminary data over the last six months suggest 99.5% of deaths from Covid-19 in the states have occurred in unvaccinated people … the suffering and loss we are now seeing is nearly entirely avoidable," Walensky said earlier this month.

In addition to the risk of illness for Americans who have yet to get a shot, having unvaccinated pockets of the population could threaten the country's ability to control the pandemic. Continued transmission of the virus means additional opportunities for new variants to emerge, with the possibility that one will be able to evade the protection offered by vaccines.

While 48% of all Americans are fully vaccinated, the pace of daily shots has slowed significantly in recent months. About 515,000 vaccinations have been administered each day on average over the past week, CDC data shows, following a steady decline from peak levels of more than 3 million shots per day in April.

President Joe Biden renewed his administration's efforts to increase vaccination rates after failing to reach his Fourth of July goals, with a focus on adolescents as well as increasing availability in places such as doctor's offices and work settings.

Nearly 1,600 counties across 40 states with 72 million residents have vaccinated less than 40% of their populations, according to CNBC's analysis. Six states in which county-level vaccination data was unavailable were excluded from the analysis.