Of the more than four million people whose jobless benefits are going to be cut off in the next few weeks, Bre Starr will be among the first.

That’s because Ms. Starr — a 34-year-old pizza delivery driver who has been out of work for more than a year — lives in Iowa, where the governor has decided to withdraw from all federal pandemic-related jobless assistance next Saturday.

Iowa is one of 25 states, all led by Republicans, that have recently decided to halt some or all emergency benefits months ahead of schedule. With a Labor Department report on Friday showing that job growth fell below expectations for the second month in a row, Republicans stepped up their argument that pandemic jobless relief is hindering the recovery.

The assistance, renewed in March and funded through Sept. 6, doesn’t cost the states anything. But business owners and managers have argued that the income, which enabled people to pay rent and stock refrigerators when much of the economy shut down, is now dissuading them from applying for jobs.

“Now that our businesses and schools have reopened, these payments are discouraging people from returning to work,” Gov. Kim Reynolds of Iowa said in announcing the cutoff. “We have more jobs available than unemployed people.”

While the governor complains that people aren’t returning to work soon enough, however, some Iowans respond that they are being forced to return too soon.

“I’m a Type 1 diabetic, so it’s really important for me to stay safe from getting Covid,” Ms. Starr said, explaining that she was more prone to infection. “I know that for myself and other people who are high risk, we cannot risk going back into the work force until everything is good again.”

But just what does “good again” mean?

Covid-19 cases have been declining in Iowa as they have throughout the country, and deaths are at their lowest levels since last summer. State restrictions were lifted in February, businesses are reopening, and Iowa’s unemployment rate was 3.8 percent in April, the latest period for which state figures are available — much lower than the national 6.1 percent that month. (Unemployment rates in the 25 states that are cutting off benefits ranged from 2.8 percent to 6.7 percent.)

Still, an average of 15,000 new cases and more than 400 related deaths are being reported daily across the country, and barely 40 percent of the population has been fully vaccinated.

Most economists say there is no clear, single explanation yet for the difficulty that some employers are having in hiring. Government relief may play a role in some cases, but so could a lack of child care, continuing fears about infection, paltry wages, difficult working conditions and normal delays associated with reopening a mammoth economy.

The particular complaints that government benefits are sapping the desire to work have, nonetheless, struck a chord among Republican political leaders.

In Ms. Starr’s case, Ms. Reynolds’s move to end federal jobless relief in Iowa is likely to have its intended effect.

Ms. Starr can be counted among the long-term unemployed. She has relied on a mix of pandemic-related benefits since last spring, when she left her job as a delivery driver for Domino’s Pizza after co-workers started getting ill.

She could probably have already gotten her job back; Domino’s in Des Moines is advertising for drivers. But Ms. Starr has been reluctant to apply.

“A lot of people in Iowa don’t wear masks — they think that Covid is fake,” said Ms. Starr, who worries not only about her own susceptibility to infection but also about the health of her 71-year-old father, whom she helps care for: He has emphysema, diabetes and heart troubles.

An early withdrawal from the federal government’s network of jobless relief programs affects everyone in the state who collects unemployment insurance. Ms. Starr, like all recipients, will lose a weekly $300 federal stipend that was designed to supplement jobless benefits, which generally replace a fraction of someone’s previous wage. In most of the states, the decision will also end Pandemic Unemployment Assistance, which covers freelancers, part-timers and self-employed workers who are not normally eligible for unemployment insurance. And it will halt Pandemic Emergency Unemployment Compensation, which continues paying people who have exhausted their regular allotment.

In addition to the $300 supplement, Ms. Starr gets $172 a week in Pandemic Unemployment Assistance. The total is about $230 less than she earned at her previous job. The government checks pay for her rent, food and some of her father’s medicine, she said.

Ms. Starr, who is vaccinated, said the governor’s order would probably force her to go back to work despite her health fears. She is thinking about some kind of customer service job from her home, although that would require her to buy a laptop and maybe get landline telephone service, she said. Absent that, she said, she may have to take another delivery job or work in an office.

Whether her case is evidence that ending jobless benefits early makes sense depends on one’s perspective. 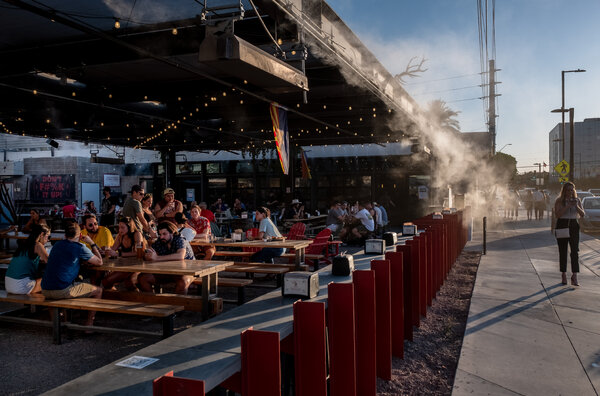 In many cases, the problem is not that people don’t want to work, said Jesse Rothstein, a professor of public policy and economics at the University of California, Berkeley. Rather, benefits give the jobless more options, he said, like an ability “to say no to things that maybe aren’t safe or aren’t good fits.”

“The reopening happened really quickly,” he said. As a result, he said, it’s not surprising that there is friction in ramping up and hiring that could be unrelated to benefits. “It may just be that it takes a few weeks to reopen,” he added. “Some of the trouble employers are having in finding workers is that they all tried to find them the same day.”

At the online job site Indeed, job searches in states that announced an early end to federal unemployment benefits picked up relative to the national trend. But the increase was modest — about 5 percent — and vanished a week later, said Jed Kolko, the chief economist for Indeed. And low-wage jobs weren’t the only ones to attract more responses; so did finance positions and openings for doctors.

Aside from any discussion about the impact of jobless benefits on the labor market, economists have warned of long-lasting scars inflicted on the economy by the pandemic.

“It’s important to remember we are not going back to the same economy,” the Federal Reserve chair, Jerome H. Powell, has said. “This will be a different economy.”

“The real concern,” he said, “is that longer-term unemployment can allow people’s skills to atrophy, their connections to the labor market to dwindle, and they have a hard time getting back to work.”

Historically, this group, which is disproportionately made up of Black and older Americans, has had a tougher time getting hired. That pattern was likely to be repeated even in the unusual circumstances caused by the pandemic, said Carl Van Horn, the founding director of the Heldrich Center for Workforce Development at Rutgers University.

Employers tend to take a negative view of people who have been out of work for an extended period or have gaps in their résumés, regardless of the reasons, Mr. Van Horn said.

“Employers always complain about not being able to find the job seeker they want at that moment at the price they are willing to pay, whether it’s the best economy in 50 years or a terrible economy,” he said.

The problem with prematurely ending jobless benefits, he said, is that “such a broad brush policy also punishes people who are also desperately looking for work.”

That’s the situation that Amy Cabrera says she faces in Arizona. Since she was furloughed last summer, Ms. Cabrera, 45, has been living off about $500 a week in unemployment benefits, after taxes — roughly half the $50,000 salary in her previous job conducting audits in the meetings and events department at American Express.

To make ends meet, she has given up the lease on her car and sublet a room in the house she rents in the San Tan Valley, southeast of Phoenix. “I’m paying for my food — whatever I need to survive — and that’s it,” she said, as she sat in the used 2006 Jeep she bought so she would not be carless. Food stamps are helping pay for her meals.

But Ms. Cabrera rejected the idea that there were plenty of jobs to be had in Arizona, where the governor has moved to end the $300 federal supplement on July 10. Many positions she is qualified for, including executive administration and office management jobs, are paying $15 an hour, she said, far from enough to pay her $1,550 monthly rent and part of her son’s college tuition. Jobs in Phoenix or Tempe would require her to commute nearly two hours each way during rush hour. And because of a bad back, she can’t have a job that would require her to spend time on her feet.

“I have desperately been looking for work,” Ms. Cabrera said. Still, of the roughly 100 jobs she estimated she had applied for, she has had only one interview.

She said she didn’t know how she would live on her remaining unemployment benefits — $214 a week after taxes — when she loses the $300 supplement.

“I really don’t have an answer for that yet,” she said. “I’ve really just been trying to roll with the punches.”