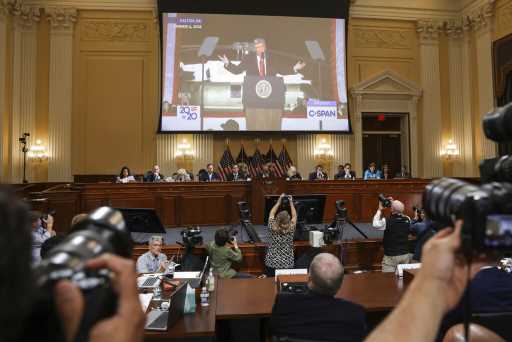 EXCLUSIVE: Rep. Bennie Thompson (D-MS), the chairman of the January 6th Committee, said on Wednesday that the hearing schedule will continue into July.

A reason: Newly obtained evidence, including footage from British filmmaker Alex Holder, who is scheduled to speak to the committee on Thursday. Per Politico, Thompson called the footage he had seen “important,” but declined to elaborate.

Deadline can reveal that the three-part series – Unprecedented – has been bought by Discovery.

Holder said in a statement this week that the footage is of the final six weeks of President Trump’s re-election campaign as well as never-before-seen footage of the January 6th attack at the U.S. Capitol.” The series includes interviews with Trump, his daughter Ivanka, sons Eric and Don Jr. and son-in-law Jared Kushner as well as Vice President Mike Pence. Holder said that he and his team are “fully cooperating” with the subpoena.

It had previously been unclear which streaming service had bought the rights to it.

What is certainly a bit of a puzzle, though, is just what is in the documentary and how Holder got access to Trump and his inner circle.

Some members of the Trump campaign were in the dark that the project even existed and seemed surprised when its existence surfaced. But it’s the type of new twist that potentially gives the committee more heft as they make their case against Trump, as their hearings so far have had some of their biggest impact with the release of audio and video clips.

Some is known: The New York Times reported on Tuesday that in one interview, Ivanka Trump seems to support her father’s pursuit of false claims of election fraud, saying, “he has to take on this fight.” The Times also reported that the filmmaker got access to the Trump family via Jason Greenblatt, who was then the White House envoy to the Middle East. CBS News’ Robert Costa reported that Holder has 11 hours of footage of interviews with the Trump family from September, 2020 to January 2021.

Holder suggested that one reason so little attention was paid to the project was that, due to the sale of the footage, he “did not previously have the legal authority to release the material or publicly discuss the project.”

Rep. Jamie Raskin (D-MD), a member of the committee, said that he became aware of the footage when “one person who was privy to the information contacted me, wrote me a letter and that was at least the way that I got onto the trail. There may have been other contacts as well.” He declined to say whether it was the filmmaker who contacted him.

Holder is perhaps best known as a producer on the documentary Keep Quiet, about the leader of Hungary’s far-right conservative party who, after expressing anti-Semitic beliefs, discovers he is of Jewish heritage. The film had its world premiere at the Tribeca Film Festival in 2016.

His attorney did not respond to a comment on the decision to cooperate with the committee’s subpoena. While there have been legal showdowns before over documentary filmmakers turning over outtakes and other footage to courts and other government bodies, the January 6th Committee has secured not just Holder’s cooperation but that of Nick Quested, who testified at the first hearing over his project on the far-right group The Proud Boys. Quested, who followed members of the group around on January 6th.