CrossFit owner Greg Glassman has sold his fitness company, after stepping down as chief following outcry over remarks he made about George Floyd.

The comments, in which he asked why he should mourn for Mr Floyd, had prompted athletes, gyms and sportswear firms to cut ties with the business.

Incoming owner Eric Roza, a tech executive and co-founder of a successful CrossFit gym, said he would be “working hard to rebuild bridges”.

The value of the Crossfit business, which is based on a branded exercise regimen focused on high intensity workouts, has previously been estimated at about $4bn (£3.1bn). It is affiliated with about 13,000 gyms in 158 countries worldwide. 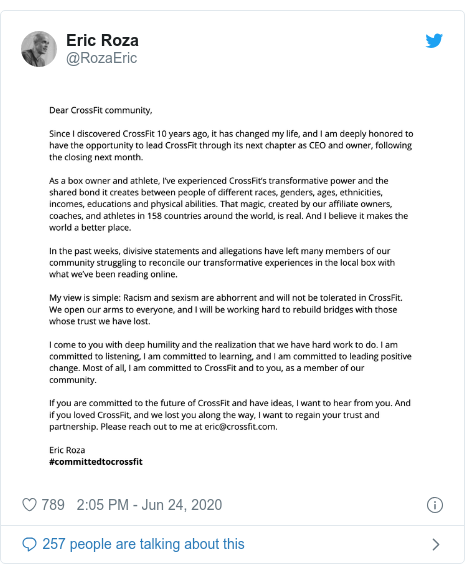 “In the past weeks, divisive statements and allegations have left many members of our community struggling to reconcile our transformative experiences in the local box with what we’ve been reading online,” said Mr Roza, a former Oracle executive who is now working for US venture capitalists General Catalyst.

“My view is simple: Racism and sexism are abhorrent and will not be tolerated in CrossFit.”

He followed it up with a second tweet saying: “Your failed model quarantined us and now you’re going to model a solution to racism? George Floyd’s brutal murder sparked riots nationally.”

He also called an affiliate “delusional” for questioning why CrossFit had been silent on the killing in Minneapolis.

Hours before posting the fateful tweets, Mr Glassman had told gym owners on a private Zoom call that was leaked to reporters: “We’re not mourning for George Floyd – I don’t think me or any of my staff are.

“Can you tell me why I should mourn for him? Other than that it’s the white thing to do.”

What happened to CrossFit?

The comments prompted affiliate gyms to drop CrossFit branding and were rebuked by athletes, as well as Adidas-owned Reebok, which said it was ending its partnership with the brand. The backlash set off further reports that alleged incidents of sexism at the firm.

In a statement this month announcing his retirement, Mr Glassman acknowledged that he had “created a rift in the CrossFit community and unintentionally hurt many of its members”.

He added: “I cannot let my behaviour stand in the way of HQ’s or affiliates’ missions. They are too important to jeopardise.”

On Wednesday, in its announcement of the new owner, CrossFit shared a statement from Mr Glassman, which said it was “time” for him to move on.

“The world has changed but the magnificent human machine, the proven benefits of CrossFit, and its market opportunity remain unchanged,” he said.

Mr Glassman’s retirement was the latest corporate fallout from the protests set off by George Floyd’s death in the hands of police, which have reignited discussions of racism and prompted many firms to speak out.