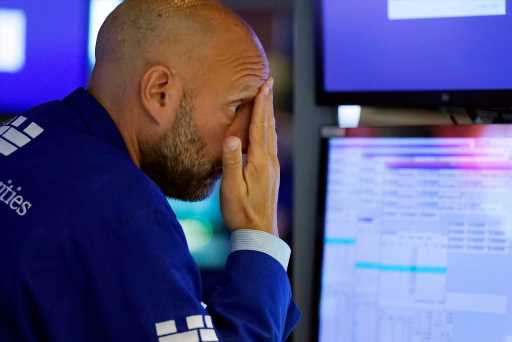 The stock market is rife with investor fears about Covid-19 wreaking fresh havoc on the economy.

The Dow Jones Industrial Average was down about 900 points with about two hours left in the trading day, slipping below 34,000. At its lowest point, the Dow had fallen more than 1,000 points. If afternoon levels hold through the close of trading, today would be the index’s worst day of 2021 and its biggest single-day point drop since October. On a percentage basis, the decline was 2.6%

Amid the gloom, media and tech stocks are hanging tough for the most part on the eve of quarterly earnings season, which kicks off Tuesday with Netflix reporting its second-quarter results.

After the U.S. showed steady progress through the spring in its fight against the coronavirus pandemic, infection rates have spiked in much of the country. Vaccination rates, meanwhile, have leveled off, leaving many Americans vulnerable to the Delta variant. That combination has sparked worries of new lockdowns or other restrictions on commercial activity.

Los Angeles has just restored indoor mask rules and some school districts already have said they will start the upcoming year with masks in place. Key international territories like the UK are confronting similar circumstances, leaving their viability for business in question, and large parts of Asia and South America remain significantly impaired by the pandemic.

Travel has been rebounding in the U.S., but the monkey wrench of the variant prompted many investors to flee stocks like Boeing and Marathon Oil, each of which dropped more than 5%. Airlines and cruise operators also have taken it on the chin.

There also were plenty of red numbers in the media and entertainment sector, but the damage was fairly limited. So-called “shutdown” stocks fared best, with Netflix down just a fraction. Roku, Charter Communications and smart-TV maker Vizio were up a fraction. Exhibition has extended its recent pullback, with shares in AMC Entertainment, Cinemark and Imax down 3%-6%.