The Neiman Marcus Group says it’s seeing a “rebound” in business, which is expressed to stakeholders in a confidential report with preliminary fiscal third-quarter results, WWD has learned.

The report, being issued today on Neiman’s online portal that only owners and lenders can access, indicates over $850 million in total liquidity for the quarter ended May 1, 2021. The report also provides guidance on comparable fiscal third-quarter sales, indicating a 43 to 44 percent gain in Q3 compared to the 2020 period, and a 6 to 7 percent decline from Q3 in 2019. Earnings information will be provided in a separate confidential report scheduled to be issued June 15.

While Neiman’s is not yet performing up to 2019 levels and has just a few months of positive results under its belt, Geoffroy van Raemdonck, chief executive officer of the Neiman Marcus Group, said in an interview, “We are seeing a really, really strong rebound in our business which give us confidence for the future. If you look at our liquidity at the end of the third quarter, it is much higher than the past. We have ample liquidity to drive our growth.”

Everything to Know About Fashion Designer Halston

The Neiman Marcus Group emerged from bankruptcy on Sept. 25, 2020 with its senior lenders — Pacific Investment Management Company LLC (PIMCO), Davidson Kempner Capital Management LP and Sixth Street Partners LLC — swapping debt for equity and becoming the new owners. The reorganization plan eliminated $4.4 billion of debt Neiman’s had on its books back then, and about $200 million to $300 million in annual interest payments. Currently, there’s about $1 billion in debt on the books and the new capital structure brings the annual interest expense down to around $80 million annually, van Raemdonck said, putting the Dallas-based luxury business in a position to build “a really strong business.” He also reported that Neiman’s $900 million asset-backed loan, led by Bank of America and a consortium of commercial banks, is fully undrawn, and that the company has lowered its cost of capital through the restructuring.

Van Raemdonck, a former Ralph Lauren and Louis Vuitton executive who became NMG’s ceo in February 2018, has been adamant that Neiman’s debt burden was what drove the business into bankruptcy last year, and that the underlying business has all along been healthy. But the Dallas-based luxury omnichannel business has been dogged by speculation of declining support by certain vendors curbing wholesale distribution, switching to concession business models, and being outperformed by competitors, putting Neiman’s and van Raemdonck under steady scrutiny. The third quarter reports challenges some of the months of speculation on the state of the business.

Gucci president and ceo Marco Bizzarri said his company has been gradually streamlining distribution since March 2020 to better control brand equity and enhance exclusivity last week. He said the company reduced the number of doors it sells to at Neiman Marcus as well as Saks Fifth Avenue, Bloomingdale’s and Nordstrom.

“Gucci has a global strategy applying to everyone. We are pivoting with new ideas,” van Raemdonck told WWD. He said Neiman’s also has new ideas with other designer labels like Louis Vuitton, and that overall the distribution with Neiman’s top fifty brands in the aggregate is greater this year than two years ago, and will grow further next year.

To encourage business with vendors as well as shoppers, van Raemdonck said, “Investments we are making on the stores are going to be substantial, including more than $100 million from developers and additional money generated by our business.” He declined to elaborate on the renovation plans, though WWD previously reported that Neiman’s plans to renovate eight stores, including those in the Bal Harbour Shops in Miami and Tysons Galleria in McLean, Va. Neiman’s has also been investing in upgrading service online, content, website navigation features and new technologies. 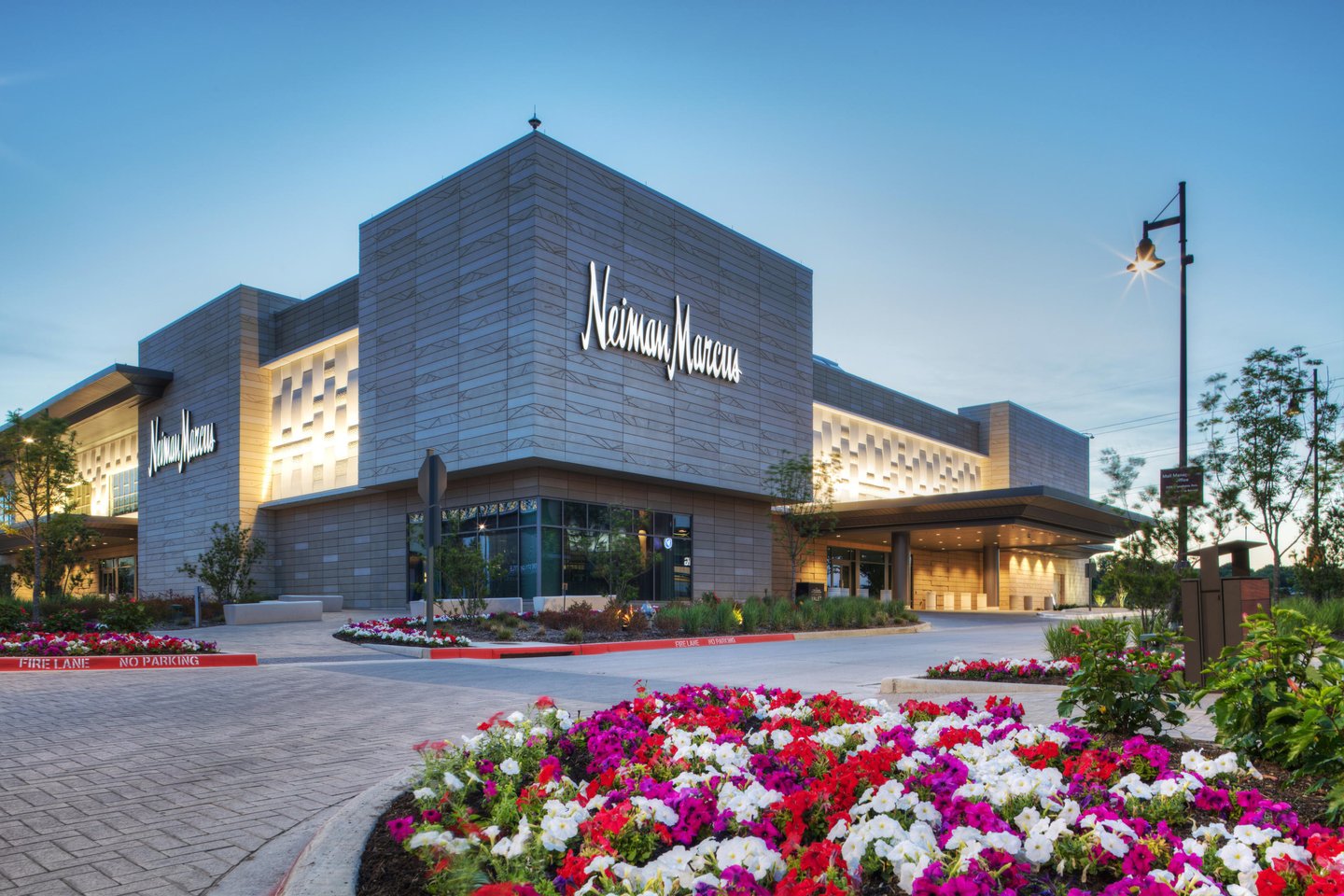 Neiman Marcus in Fort Worth, Texas.

Business at Neiman’s was further hurt by the severe snowstorm that pounded Texas in late February. “Texas has never seen something like that. There was no heating and no electricity for a week [in certain parts of the state],” said van Raemdonck. “Distribution centers were inoperative for almost a week. We couldn’t ship or confirm orders for online and receive shipments, and Texas stores closed for a half a week, to a week. The biggest impact was the inability to ship online. Sales associates worked around the clock to adjust to the situation.” They helped to remediate water damage in the stores and some even helped fill generators that ran out of fuel. “Many of our employees were without power and electricity, but everyone basically chipped in and took whatever role was required.”

After February’s difficulties, March and April saw “a significant rebound,” van Raemdonck said. While business was soft in New York and the West Coast where strict Covid-related restrictions on operations remained challenged, “the rest of the country was positive in the mid-single digits and some regions were double digits,” van Raemdonck said. “That gives you a sense of how strong the business is when you don’t have really tight restrictions.” Neiman’s business in the Southeast, where restrictions were more relaxed, has been best, he said.

Citing some trends, van Raemdonck said buy-now, wear-now and newness are selling, and that the company is working with brands to support that with more frequent merchandise drops. While women’s is generally still soft, “We’ve seen a shift in women’s contemporary, bridal and swim. These are good examples indicating signs of a recovery and going back to normal life,” including wedding and vacation planning. “We sold more shorts in February this year than in June last year.” The uptick in women’s contemporary reflects women starting to get out and socialize. He also said in men’s wear, sneakers and the designer business are strong, and that much of the men’s business is coming from younger customers. “There is a real new market there with new customers,” van Raemdonck said.

The ceo sees “a real desire for luxury and we are capturing more share of that demand…We finished Q2 and entered Q3 with much less inventory than prior years. We bought spring goods down 20 percent. Full price selling is significantly up,” helping margins and postponing markdowns. “We moved markdowns later, by four to six weeks. Historically we would have May markdowns. We moved them to June and July. We are promoting full price and it is working,” van Raemdonck said.

On the downside, “Tourism continues to be really non-existent, particularly international tourism”, said van Raemdonck. “We are seeing a little bit more domestic tourism, and people are buying in their area of prime residence. We’ve seen a real pickup in local stores,” as opposed to stores in gateway or tourist-oriented cities. “We also continue to see significant digital sales from out-of-state customers,” van Raemdonck added. Stores in California, Florida and New York normally host large numbers of international travelers.

Neiman’s recently permanently closed six stores, including five during the bankruptcy, leaving 37 Neiman Marcus stores, two Bergdorf Goodman stores and five Last Call units still operating. Asked if additional closings will happen, van Raemdonck replied, “We believe that this is the right size of the network. All of the closings were in markets where we had multiple stores.” Though no further closings are planned, stores routinely get reviewed for their future potential.

Though Neiman’s is now presenting a brighter picture, it must significantly sustain revenue gains to manage its remaining debt and maintain solid relationships with vendors. 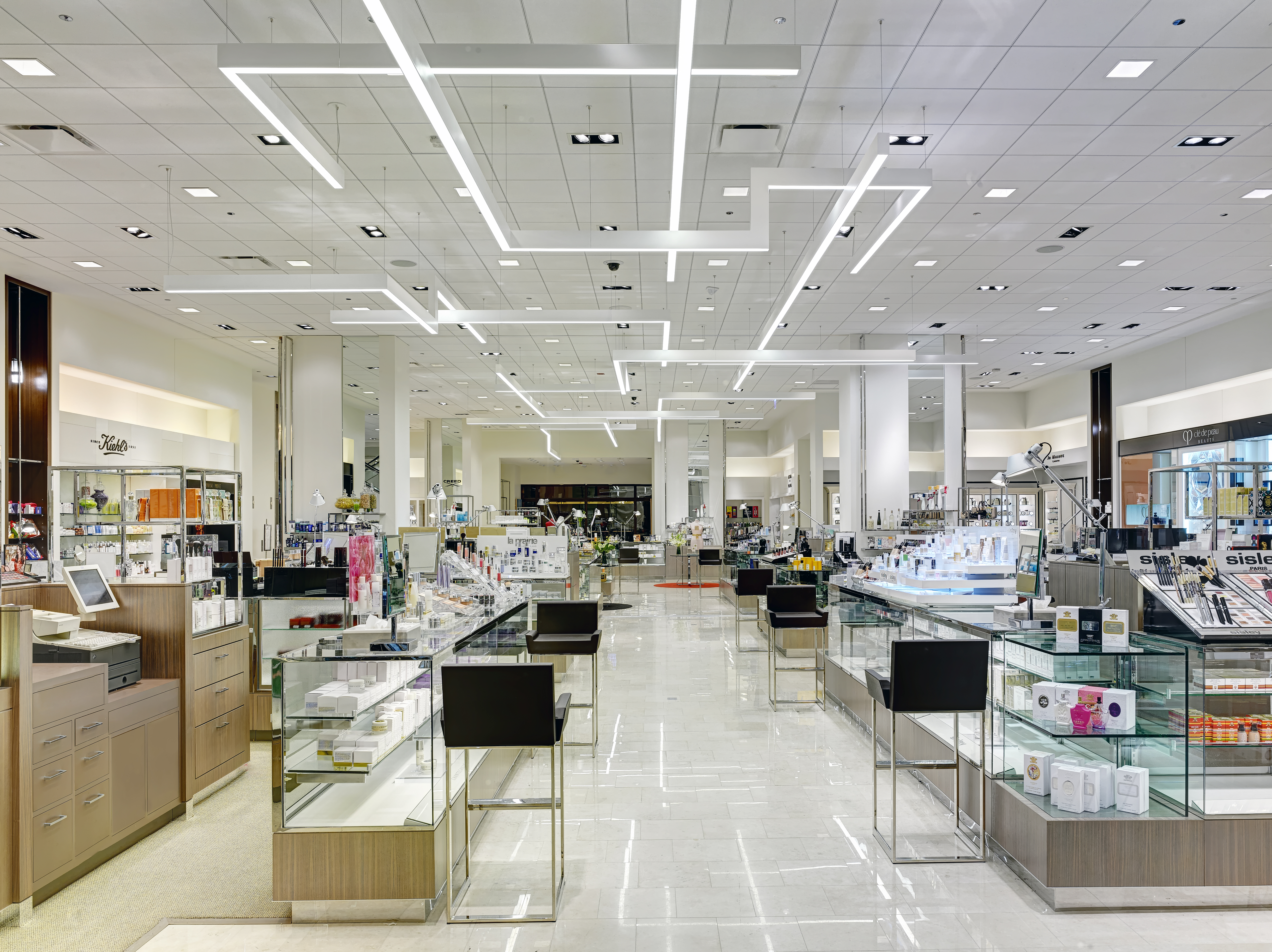 The beauty floor at Neiman Marcus on Michigan Avenue in Chicago.