The statement, printed Wednesday in an advertisement in the New York Times, was organized by Ken Chenault and Ken Frazier, two of America’s most prominent Black corporate leaders. The statement called democracy a “beautifully American ideal” and for it to work, “we must ensure the right to vote for all of us.”
“We all should feel a responsibility to defend the right to vote and to oppose any discriminatory legislation on measures that restrict or prevent any eligible voter from having an equal and fair opportunity to cast a ballot,” it continued. 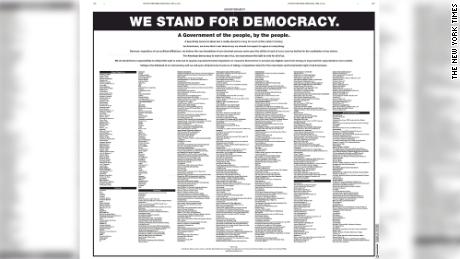 The statement, which is described as “nonpartisan,” doesn’t directly address any specific legislation, notably in Georgia, Texas, and other key states where Republican lawmakers are trying to clamp down on ballot access.

Wednesday’s statement was a sign of solidarity after weeks of warring between Republicans and a smaller group of Georgia-based companies that spoke out after public pressure.

Three of those companies, including Coca-Cola (KO), Delta Air Lines (DAL) and Home Depot (HD), declined to add their names, according to the New York Times. All three are based in Georgia and were “wary because of the blowback they had received after their earlier statements on voting rights but also did not feel the need to speak again,” it reported.
It’s the latest high-profile letter from companies in the last month.

A few weeks ago, chief executives and other high-ranking leaders from more than 100 companies including Target, Snapchat and Uber, issued a public statement opposing any measures that deny eligible voters the right to cast ballots. That letter was organized by Civic Alliance, a coalition that “recognizes that a strong democracy is good for business,” according to its website.
Another letter, released in late March, from Black business executives challenged their fellow corporate leaders to be more forceful in condemning what they describe as deliberate attempts by Republicans to limit the number of Black Americans casting ballots in key states.
Source: Read Full Article