California Governor Gavin Newsom started his Monday meeting with President Donald Trump by thanking the Commander-in-Chief for his help with the California wildfires.

Newsom said the president had acted very quickly and that his major disaster declaration “profoundly significant.”

“I want to thank you and acknowledge the help that you’ve given,” said Newsom to Trump. Newsom then observed that the amount of federal wildfire support the state has received, “may be a record.”

He thanked the president for a new commitment to “double our vegetation management and forest management” over the next 20 years.

But Newsom then leaned into Trump with statistics that reflect the federal government’s responsibility for the recent wildfires.

“We can agree to disagree on the politics,” said Newsom, “but one thing is fundamental: 57% of the land in this state is federal and 3% is state forests.”

See the exchange below.

The governor’s statistics are, indeed, correct according to U.S. Forest Service data. What’s more, 21 of the fires currently burning are on federal land, including the largest fire ever recorded in California. That raises questions about Trump’s repeated claims that the state is not doing enough on brush clearance. 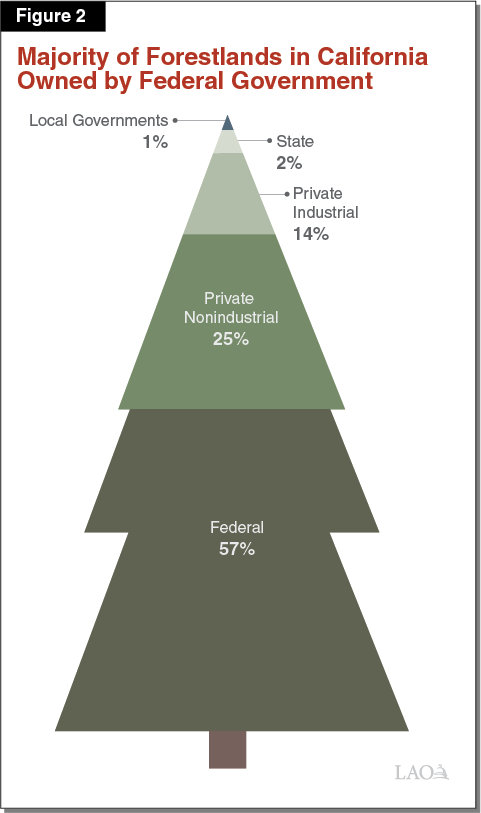 In fact, just minutes before the meeting with Newsom, Trump restated his position.

“When trees fall down…after about 18 months, they become very very dry,” said the president. “They become really like like a matchstick. There’s no more water pouring through. They just explode.”

“And also leaves,” President Trump continued, “dried leaves on the ground. It just sets it up. It’s really a fuel for a fire. So they have to do something about it.”

His prescription is “cuts,” he said, apparently referring to cutting firebreaks in forests.

“People don’t like to do cuts,” observed Trump. “But if there is a fire, and it gets away, you have a 50 yard cut so it won’t be able to catch to the other side. They don’t do that.”

Newsom admitted to Trump that forests in the state need more brush clearance: “We have not done justice for our forest management.”

Indeed, according to a report from the non-partisan California Legislative Analyst’s Office, total timber harvesting in California have dropped by over two-thirds since the 1950s.

But, said Newsom, poor forest management is not the only issue.

“Please respect the difference of opinion,” he asked Trump, “fundamentally, on this issue of climate change.”