Broadway Extends Mask & Vax Requirements Through April, Will Soon Include Children Over 5 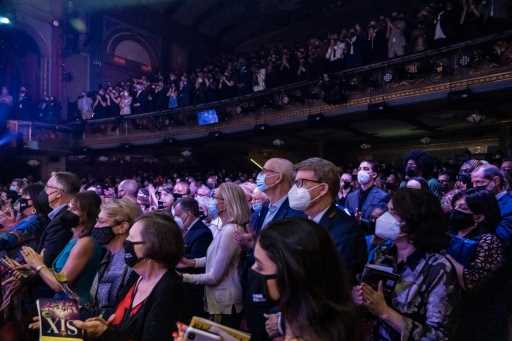 Broadway’s mask and Covid vaccination requirements for audiences and theater workers has been extended through April 30, with the rules expanding to include children ages 5- to 11-years-old starting Jan. 29.

The extension, announced today by the Broadway League and covering all 41 Broadway venues, defines “full vaccination” as two doses of vaccine (or one does of the approved single-dose vaccine), but does not address booster shots. (At least two major Off Broadway companies – The Public Theater and Playwrights Horizons – are now requiring audiences show proof of booster shots.)

In a statement announcing the extension,  Charlotte St. Martin, President of The Broadway League said, “We’re proud to continue setting the gold standard of covid health protocols in all our Broadway theatres in New York. We’re equally proud to assure our ticket buyers’ purchases are secure with our flexible Buy With Confidence refund and exchange policies. Our theatres and world class shows are open for business, ready to welcome and enrapture our audiences, as we’ve done every day for the past five months.”

The possible addition of a booster requirement reportedly has been among the stumbling blocks in negotiations between the League and various Broadway unions to devise new work rules amidst repeated cancelations of performances due to the Omicron variant surge. In addition to disagreements over the number of booster shot days-off, the League, which represents theater owners and producers, and the unions are butting heads over the issue of pay cuts when shows cancel, according to a recent Daily Beast report. (Neither the League nor Actors’ Equity have commented on the negotiations.)