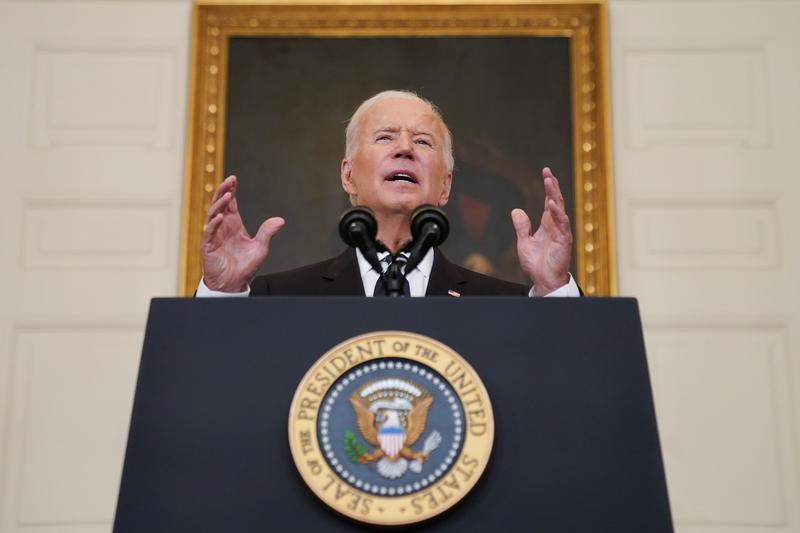 WASHINGTON (Reuters) -U.S. President Joe Biden met on Wednesday with U.S. CEOs and other top business leaders as he pushes companies to require workers to be inoculated against COVID-19 amid a surge in infections among the unvaccinated.

Biden last week announced here vaccine mandates for nearly all federal employees, federal contractors, and larger companies as the number of U.S. infections continued to rise, hospital beds in some parts of the country filled up and mask requirements returned. After months of trying to persuade Americans to get free vaccinations, the White House is pushing state and local governments, companies and schools to adopt mandates requiring them instead.

Biden said at the beginning of the meeting that it would take some time to get the new requirements in place.

“It’s about beating this virus and saving lives,” he said.

Some Republican-led states and a sizable minority of Americans have defied vaccine recommendations from health officials, citing economic or freedom-of-choice arguments. With just 63% of the population having received at least one dose, the U.S. vaccination rate now lags here most developed economies.

Opinion polls have shown a majority of Americans support some form of vaccine mandate.

Biden told reporters here on Tuesday that he had seen “positive support for mandates, by and large,” although he conceded that there would always be a small percentage of people who would refuse to get inoculated.

The White House hopes Wednesday’s meeting will serve “as a rallying cry for more businesses across the country to step up and institute similar measures,” an official said, speaking on condition of anonymity.

The meeting involves business leaders and chief executives who have instituted vaccine requirements or are working to implement the new rules, the person said.

The policies announced last week require nearly all federal workers and federal contractors to get COVID-19 vaccinations and push large employers to have workers inoculated or tested weekly. The new measures would apply to businesses with more than 100 employees, about two-thirds of all U.S. workers.

Also among those meeting with Biden were the CEOs of the Kaiser Permanente healthcare system, the Children’s Hospital of Philadelphia and Molly Moon’s Homemade Ice Cream.

The fast-spreading Delta variant of the coronavirus has sparked a new wave of sickness and death, posing increased risk not just to the country but to a president who as a candidate promised to get control of the pandemic.

Some small employers have voiced frustration with the mandate. Large employers like U.S. automakers General Motors Co and Ford Motor Co and rare-earths producer MP Materials Corp said they are encouraging employees to get the vaccine, but they were quiet about Biden’s executive order.

Raytheon Technologies Corp, a weapons maker and aerospace company that does extensive business with the U.S. government, said on Wednesday that it expects Biden’s vaccine mandate will strengthen their business outlook heading into the fourth quarter.

Lates News:
2021-09-15
Previous Post: Households urged to act on bills as fire adds to leap in power costs
Next Post: Blackburn: It is 'apparent' Biden's Afghanistan withdrawal was inconsistent with military advice