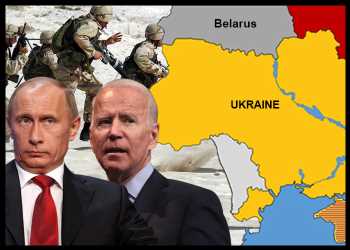 US President Joe Biden has called his Russian counterpart Vladimir Putin a war criminal, and demanded that he should be held accountable for the mass killings purportedly committed by Russian forces last week.

Around 300 bodies of Ukrainians were found in a mass grave in the northwest of capital Kyiv following the hasty departure of Russian forces from the area on Sunday.

Ukrainian President Volodymyr Zelensky said the number of civilian casualties may be much higher in other cities liberated from Russian control as the ongoing retreat of Russian forces around Kyiv reveals alleged atrocities.

Zelensky is set to address the United Nations Security Council on Tuesday at 10 a.m. ET.

The U.S. ambassador to the U.N. Linda Thomas-Greenfield said that she will seek Russia’s suspension from the UN Human Rights Council.

Speaking to reporters after Marine One Arrival in Washington, D.C., Biden said he plans to impose additional sanctions on Russia over the atrocities committed by Russian forces retreating from Bucha and other towns in Ukraine.

National Security Advisor Jake Sullivan later said the Biden administration is working intensively with its European allies, and will announce further sanctions this week to put economic pressure on Russia.

Sullivan said at a White House news conference that Washington is collecting “a lot of information” that the Ukrainians have provided it directly, through intelligence sources, from media reports, and from independent fact finders to independently corroborate Ukraine’s allegations about atrocities in Bucha. The U.S. Government is preparing documentation to help build very strong dossiers of evidence for war crimes prosecutions against Russian forces.

Revealing the U.S. assessment of Russia’s latest war strategy, Sullivan told reporters, “Russia is going to reposition their forces to go after a different objective — a scaled-down objective, but nonetheless a dangerous and disturbing objective, to conquer an occupied territory in eastern Ukraine.”

He said that with the Ukrainian military holding firm and capital Kyiv and other cities still stand, “Russia is revising its war aims.”

“Russia is repositioning its forces to concentrate its offensive operations in eastern and parts of southern Ukraine, rather than target most of the territory. All indications are that Russia will seek to surround and overwhelm Ukrainian forces in eastern Ukraine,” the top US security official told reporters.

“We anticipate that Russian commanders are now executing their redeployment from northern Ukraine to the region around the Donbas in eastern Ukraine,” he added.

“Russian forces are already well on their way of retreating from Kyiv to Belarus as Russia likely prepares to deploy dozens of additional battalion tactical groups, constituting tens of thousands of soldiers, to the frontline in Ukraine’s east.”

Washington’s assessment is that Russia will focus on defeating the Ukrainian forces in the broader Luhansk and Donetsk provinces, which encompasses significantly more territory than Russian proxies already controlled before the new invasion began in late February.

In order to protect any territory it seizes in the east, the United States expect that Russia could potentially extend its force projection and presence even deeper into Ukraine, beyond Luhansk and Donetsk provinces.

During this renewed ground offensive in eastern Ukraine, Moscow will likely continue to launch air and missile strikes across the rest of the country to cause military and economic damage and to cause terror, including against cities like Kyiv, Odesa, Kharkiv, and Lviv, according to Sullivan.

Meanwhile, the Pentagon says it is supplying Ukraine with defensive weapons, including stinger and Javelin missiles and unmanned aerial systems, as rapidly as possible.