Macy’s, as it battles to capture holiday sales, is closely watching for “hot spots” of spiking coronavirus cases around the country in a state of readiness for potential further temporary shutdowns.

“We’ve got dashboards. We look at every data point — absolutely. I’m looking at a heat map right now where the issues are. We’ve become very practiced in this,” Jeff Gennette, chairman and chief executive officer of Macy’s Inc., told WWD on Thursday, right after the retailer reported a third-quarter loss of $91 million, or $0.19 cents a share on an adjusted basis, off a decline in revenues to $3.99 billion.

Still, the results were better than expected, with sales in the quarter helped by early demand for holiday gifts and a shift in a “friends and family” event from November to October.

Comparable sales were down 20.2 percent even as stores continued to recover, though digital sales grew 27 percent and represented 38 percent of total owned comparable sales. In the third quarter a year ago, Macy’s posted a net profit of $2 million, or $0.07 a share, and revenues of $5.17 billion.

Earnings before interest, taxes, depreciation and amortization were $113 million, compared to $300 million in the 2019 period. Macy’s said it achieved the positive EBITDA one quarter sooner than expected and that it ended the third quarter in a “strong” liquidity position with about $1.6 billion in cash and about $3 billion of untapped capacity in the company’s asset-based credit facility.

Macy’s is among the thousands of retailers that are considered “nonessential” and subject to potential closures in areas spiking with COVID-19 cases, as well as keeping occupancy rates low in certain areas, as mandated by state and local officials.

“We don’t believe there should be some arbitrary designation, essential or nonessential. Either [your store] is safe or unsafe,” said Gennette. “We have done a good job to insure that we are taking every precaution outlined by the Centers for Disease Control and I think we’ve clearly shown that we know how to keep our colleagues and our customers safe. We believe that we can operate through COVID-19 and keep every one of our stores open.

“There was a lot of damage to our business when we closed our stores temporarily while other businesses that sold some of our same products and categories stayed open.” Among those other businesses would be Target, which has extensive food offerings, unlike Macy’s, and this week reported strong third-quarter results.

Gennette said that Macy’s with the National Retail Federation and Retail Leaders Industry Association are lobbying mayors and governors around the country to re-classify what’s considered essential or nonessential retail, and that he is “heartened” that political leaders are starting to come around to his point of view. “I think all of us should be held accountable to keeping customers safe — that what’s the measurement should be,” said Gennette. 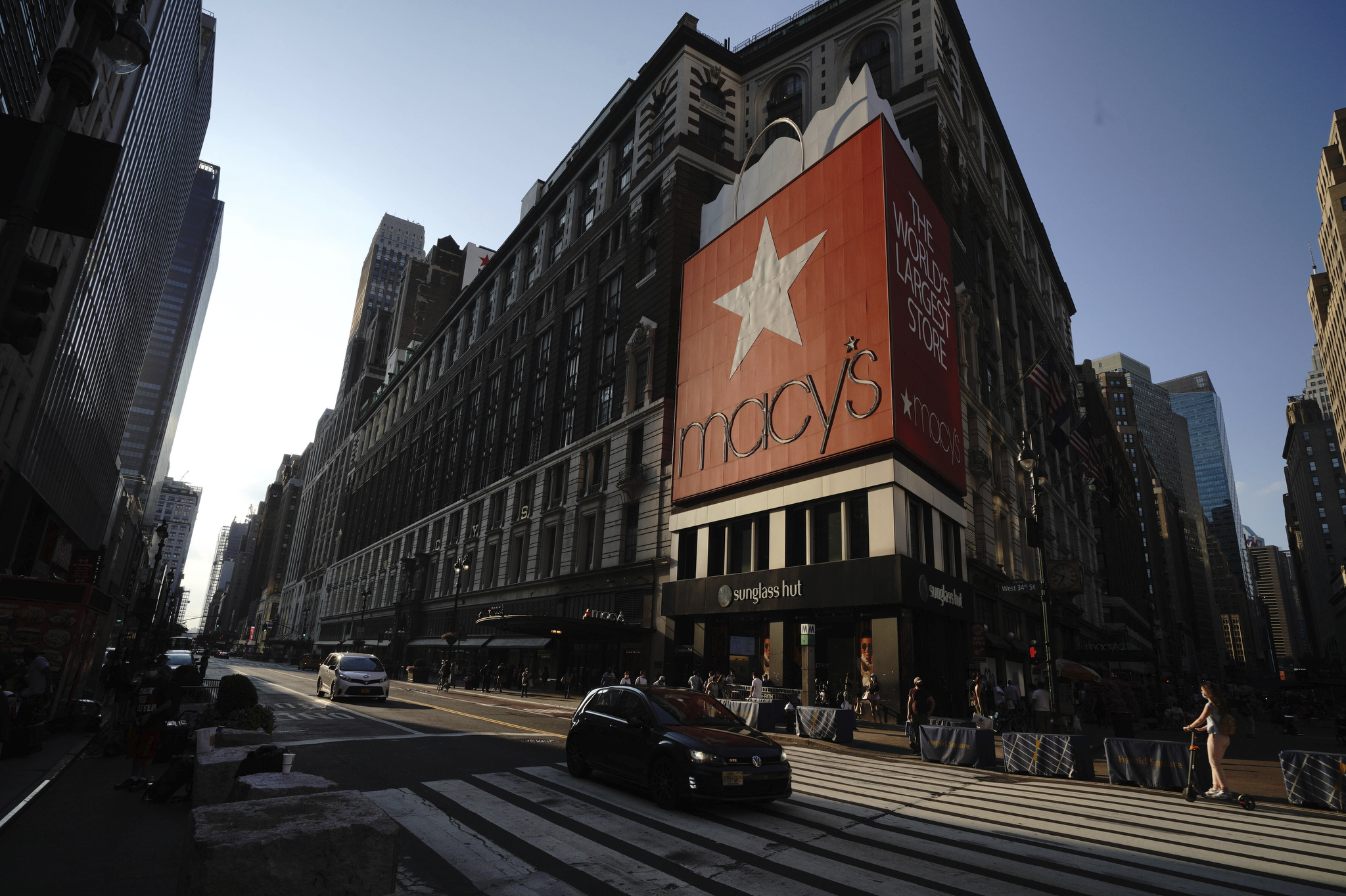 Asked what parts of the country he’s most concerned about over potential future closings, Gennette replied, “I don’t want to call it out. But we are prepared for it. We do so much scenario planning…I expect our digital business is just going to get better and better. We are doing more fulfillment out of our stores. We have been aggressive implementing curbside pick-up, and with same-day delivery through DoorDash.”

Even if a store does close in the future, Gennette emphasized, Macy’s will be able to satisfy the demand in those affected areas through curbside pick-ups, fulfilling online orders through stores, and having workers prepared to adapt to the changing conditions. “We’ve modeled closures. I don’t anticipate them…With the digital business as big as ours, fulfillment is top of mind and we are making sure we have a flexible supply chain that takes care of customers’ needs.”

He said Macy’s is testing two permanently closed stores, in Littleton, Colo., and Dover, Del., as fulfillment sites. The “At Your Service” desks inside the store, for returns and pick-ups, are also functioning. Macy’s has At Your Service desks across its fleet.

Gennette said he expects Macy’s to sustain double-digit gains in digital sales through 2021 and cited several improvements the retailer has made to its digital experience, including re-platforming Google search, adding the Klarna installment payment option, richer product description pages, more personalized messaging and recommendations, and better communications on deliveries for the holiday season so shoppers know when to expect packages. “Brands are showing up on the site in a more narrative way,” Gennette added.

Increased shipping costs due to rising online shopping are somewhat but not totally offset by buy online, pick-up in-store and curbside pick-ups, and also generate some additional shopping in the stores. “Twenty percent of our digital demand was fulfilled through stores. For holiday, it will be 25 percent,” Gennette said.

Aside from higher shipping costs, Macy’s is also this year dealing with higher interest expense based on the additional long-term secured debt the company took on to help navigate the business through the pandemic. The company, which has about $5 billion in debt, incurred net interest expense of $80 million, an increase of $32 million on the prior-year period.

Based on recent news reports that the Moderna and Pfizer COVID-19 vaccines could be mass distributed possibly early next year, “At this point at least I feel the impact on retail will be in the second half,” Gennette said.

At that time, he expects a surge in demand for occasion-based and wear-to-work clothing — evening wear, and dresses, but added, “It’s too soon to plan for that right now.” The key, he said, “is to have a supply chain to react quickly.”

International tourism accounted for 4 percent of Macy’s business in 2019. “We’re not planning for that in 2021,” Gennette said. Tourism this year, both domestic and international, has dried up.

“The real interesting question is what happens to the home store,” which has been up double digits in all categories with the exception of luggage, Gennette said. When a vaccine is fully scaled, the home business is seen dropping, he added.

Gennette said that with holiday selling starting in late October, regarding Black Friday, “I don’t expect to see the same spike” in business as in past years. Business will be more even, with the demand being spread out this year. Nevertheless, he said Macy’s stores will be ready for crowd control for the Black Friday period and 10 days preceding Christmas, when in normal years there would be crowd surges.

In other third-quarter results at Macy’s, inventory was down 29 percent and the company indicated it exited the quarter in “a clean inventory position.”

Gross margin was 35.6 percent compared to 23.6 percent in the second quarter of 2020, an improvement of about 12 percentage points.

Gennette said Macy’s third-quarter results reflected “solid performance across all three brands — Macy’s, Bloomingdale’s and Bluemercury. Our results were driven by disciplined cost management, strong execution by our colleagues and an early start to the holiday shopping season.”

Home furnishings, jewelry, fragrance, beauty and Backstage performed well in the quarter and outpaced the business.

“We’re continuing to emphasize the categories our customers increasingly value as they spend more time at home, such as textiles, housewares and home entertainment and decor — they all had double-digit sales increases in the quarter,” Gennette said during a conference call with retail analysts.

“We have strong performance at both ends of the value spectrum. The luxury trend continues across Macy’s and Bloomingdale’s as customers shift their spending from experiences to products.”He said apparel overall is still down, women’s is the worst segment, while kids is outperforming men’s and women’s, though he also said that “Macy’s has been able to shift effectively into casual and active categories where the customer is shopping.”

He said the Macy’s, Bloomingdale’s and Bluemercury stores are showing “a gradual, steady recovery” and that conversion rates are good, considering customers shopping inside the stores are purchase-driven, more so than browsing.

“The stores that are performing the worst are the ones that are in downtown locations,” Gennette said. “So when you look at Herald Square, you look at Bloomingdale’s 59th Street, State Street, Union Square, they’re our most challenged.” The two biggest factors in those locations are the lack of office workers and the transient work populations, as well as the lack of tourists.

On the other hand, Gennette added, “I’m actually very heartened by the performance of what’s going on in those buildings with the local customers…When you get into the suburban population, what we used to call our magnet stores as well as our neighborhood stores, they’re pretty consistent.”