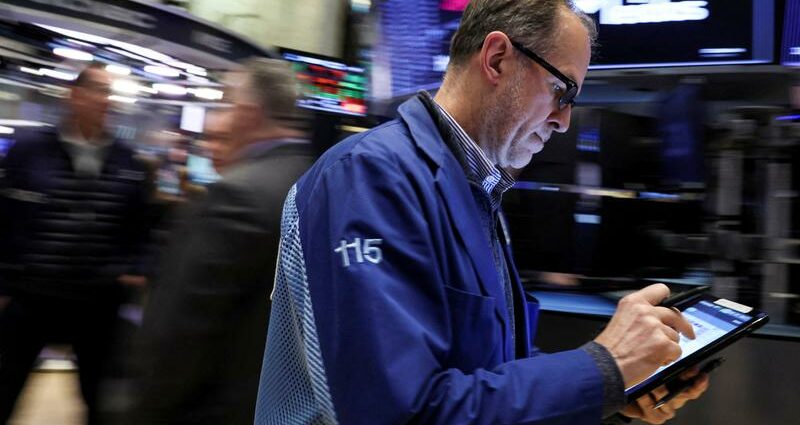 NEW YORK (Reuters) – Which market has it right?

With the first quarter of 2022 nearly over, the U.S. stock and bond markets appear to be conveying drastically different assessments of the growth outlook, leaving investors to decide which view will prevail.

The S&P 500 has come roaring back from a near-13% decline and is on track to finish the quarter off 3.6% after a rebound that has defied worries over tighter monetary policy and geopolitical instability stemming from the war in Ukraine. Many stock investors have even shrugged off a brief inversion of a closely watched section of the U.S. Treasury yield curve – a phenomenon that has predicted past recessions.

Bond investors appear far more pessimistic on the economy, with the ICE BofA index on track for its worst start to the year ever on worries that the Fed will cause recession by aggressively tightening monetary policy in its bid to fight surging inflation. Yields on the benchmark 10-year Treasury are up 81 basis points this quarter and stand near their highest level since May 2019.

Illustrating the countervailing forces in markets, the CBOE Volatility Index – viewed as a gauge of fear in equity markets – stands not far from its lows of the year, with investors pinning the reversal in stocks on everything from quarter-end rebalancing to buying from retail investors. At the same time, the ICE BofAML MOVE index, which tracks Treasury yield volatility, remains elevated.

“Rates markets are very consistent in telling a story where the Fed is going to do some damage to the economy, (while) risk markets have not really done a good job of pricing any significant damage to the growth outlook,” said Edward Al Hussainy, senior interest rate and currency analyst at Columbia Threadneedle. “One of these stories is wrong.”

One source of contention among investors has been the yield curve, where rates for two-year Treasuries briefly rose above those for 10-year Treasuries earlier this week.

Such an inversion is concerning because it has preceded 6 of the 7 recessions since 1978, according to data from Truist Advisory Services. Some investors, however, have given a broad range of reasons why the signal’s predictive power may not apply this time, including the potentially distortive effects of the Fed’s massive COVID-19 stimulus on rates markets.

In any case, recessions have followed past inversions with an average lag of 16 months, and the S&P 500 has averaged an 11% gain in the 12 months following inversions, Truist’s data showed.

“We would take this (equity) rally as a sort of a gift,” said Sameer Samana, senior global market strategist at Wells Fargo Investment Institute. “If you weren’t able to reduce your exposure to some of the speculative areas of the market before the correction, now is your time.”

Mark Haefele, chief investment officer at UBS Global Wealth Management, cautioned investors against over-interpreting the exuberance in stocks or the gloom in the bond market. Still, the firm has scaled back its outlook for global earnings growth and now sees a more modest upside for stocks with a year-end target of 4,700 on the S&P 500. The index was recently at 4,590 on Thursday.

Others have pointed out that the gap between yields on the 3-month and 10-year Treasuries – another closely followed measure – is positive by approximately 180 basis points.

That’s a sign there is still room for the Fed to shift gears before the market starts to price in a recession, said Gary Cloud, a portfolio manager at Hennessy Funds.

Though policymakers have said they could raise rates by as much as 50 basis points in a single meeting if warranted and investors are pricing in some 200 basis points of tightening this year, “the Fed doesn’t want to tighten so much that it causes a recession,” Cloud said. [L2N2VW1SG]

Others, however, are skeptical the Fed will be able to engineer a soft landing.

Tim Murray, a capital markets strategist in the multi-asset division at T. Rowe Price, is moving into commodities and defensive sectors of the stock market while increasing allocations to longer-duration Treasuries, assets he believes will thrive during a downturn.

“Once the Fed starts hiking, there’s a good chance that we will have a recession in the relatively near future,” Murray said. “I get a sense that investors are not worried enough about this.”