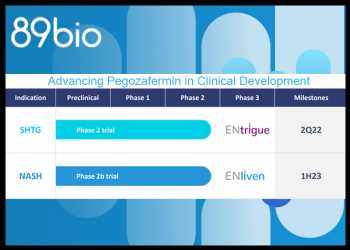 89bio is a clinical-stage biopharmaceutical company developing innovative therapies for the treatment of liver and cardio-metabolic diseases.

FGF21 has been shown to reduce liver fat by increasing fatty acid oxidation, reducing the formation of new fat in the liver and reducing systemic levels of triglycerides (fat).

A phase II trial of Pegozafermin in severe hypertriglyceridemia, dubbed ENTRIGUE, is ongoing, with topline data anticipated next quarter (2Q).

Severe hypertriglyceridemia, or SHTG in short, is a condition characterised by severely elevated levels of triglycerides (greater than or equal to 500 mg/dL). It is associated with an increased risk of non-alcoholic steatohepatitis, cardiovascular events, and acute pancreatitis. Up to 4 million patients in the United States are said to have SHTG. Of these patients, it is estimated that 56% have hepatic fat, 42% have dyslipidemias and 27% have diabetes.

Pegozafermin is also under a phase IIb trial in patients with fibrosis stage 2 or 3 non-alcoholic steatohepatitis, dubbed ENLIVEN, and topline data are anticipated in the first half of 2023.

Nonalcoholic steatohepatitis (NASH) is the more severe form of non-alcoholic fatty liver disease (NAFLD), caused by a buildup of fat in the liver. It is estimated that more than 6 million people in the U.S. are living with NASH.