A vast majority of Asian American adults, 81%, say violence against them is rising in the U.S., according to a new survey from Pew Research Center. The findings come after more than a year of the Covid-19 pandemic, and the racial stigma and xenophobia against Asians that's followed.

The Pew survey of 352 Asian adults, conducted in English from April 5 to 11, came shortly after the fatal shootings of eight people, including six Asian women, in the Atlanta area on March 16.

By comparison, 56% of all U.S. adults believe violence against Asian Americans has risen in the last year.

Overall, 45% of Asian adults say they've experienced at least one of five racist incidents, as defined by Pew, since the start of the pandemic, including 32% who said they have feared someone might threaten or physically attack them; 27% who say people acted as if they were uncomfortable around them; 27% who have been subject to racial slurs or jokes; 16% who have been told to go back to their home country; and 14% who were blamed for the coronavirus outbreak. 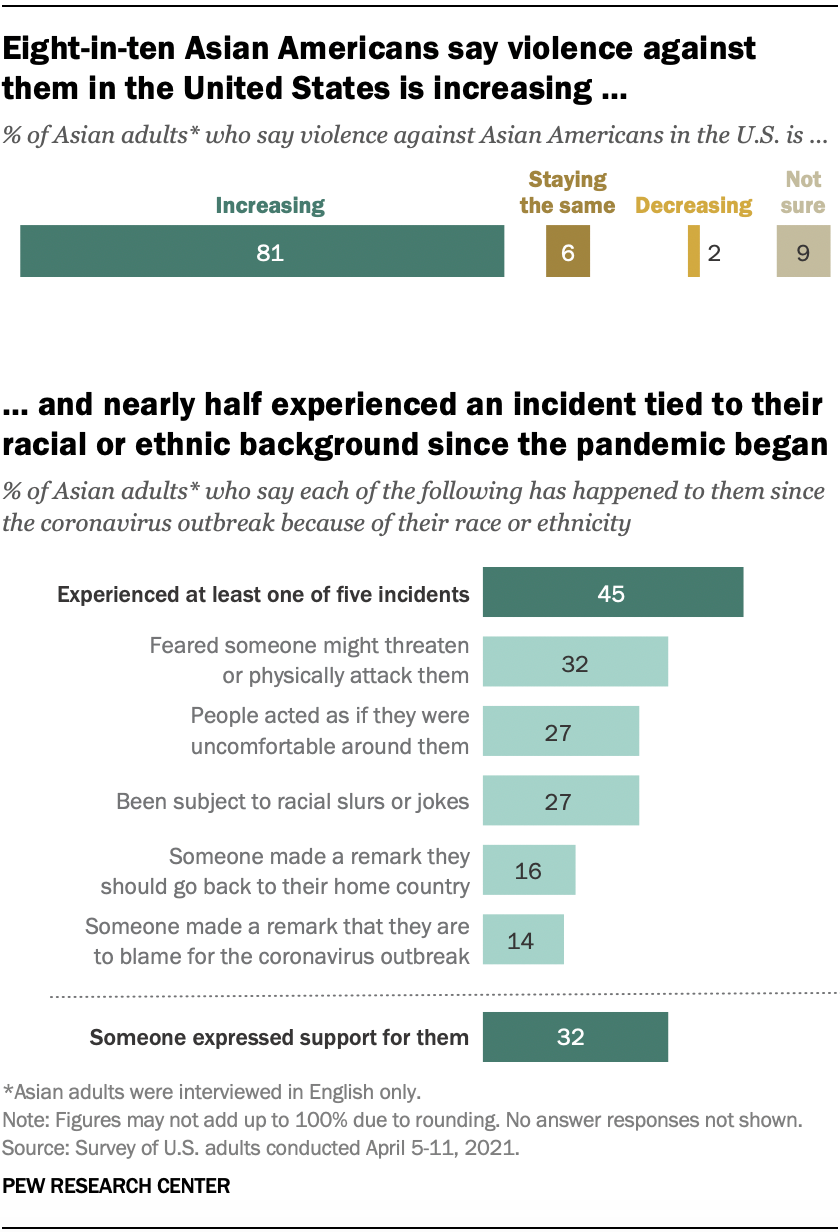 Stop AAPI Hate, a national coalition started to document anti-Asian discrimination during the pandemic, said it received 3,795 self reports of anti-Asian hate incidents between March 2020 and February 2021.

It's crucial to consider the context of these incidents and resulting public perception, says Manjusha Kulkarni, the executive director of the Asian Pacific Policy and Planning Council and co-founder of Stop AAPI Hate.

Because the group's data is limited to the beginning of 2020, and hate incidents generally go underreported, Kulkarni tells CNBC Make It that it's hard to say if new reports of hate are rising due to increased incidents, improved reporting systems or even just better awareness of the issue that empowers victims to report.

With that said, Kulkarni stresses the importance of collecting this data to begin with, and that any reports are certain to be "the tip of the iceberg."

"It's important to have research and surveys, like the ones by Pew, AAPI Data and others," Kulkarni says. "That helps us to better understand the issue of underreporting and address it. It enables us as Americans, and also policymakers, to better understand frequency and severity of this problem."

Respondents to the Pew survey gave many reasons for why they think there's been an increase in anti-Asian racism and violence in the last year, including former President Trump's racists characterization of the origins of the coronavirus. Others cited ongoing racism, a general rise of violence during the pandemic and a history of scapegoating Asians in the U.S.

Notably, while the number of hate crimes against Asians increased by 150% in 2020, total hate crimes in the U.S. decreased by 7% overall, according to a March analysis released by the Center for the Study of Hate and Extremism at California State University, San Bernardino.

The limits of bystander intervention trainings

Meanwhile, from the April Pew survey, only 32% of Asian adults reported that someone had expressed support for them and their racial or ethnic group since the coronavirus outbreak.

"To me, that means only one in three of us has had someone recognize our personhood or Americanness," Kulkarni says. "One in three is not a lot. Why isn't it three out of three? Why isn't every one of us supported by our neighbors, friends and community members?"

The majority of documented hate incidents occurred at businesses and in public, according to Stop AAPI Hate data. Many advocacy groups have encouraged people to participate in free bystander intervention trainings that teach individuals how to respond to hate incidents in the moment.

But individual actions have their limits.

Employers have a responsibility to stop Asian racism

In April, a national coalition of Asian American chief executives and business leaders publicly committed $10 million to justice groups and implored allies in corporate America to do more to support their AAPI workforces, such as by creating and funding AAPI employee resource groups, and ensuring better representation at their companies at all levels of the organization.

Beyond financial commitments, Kulkarni says businesses can go a long way in making sure their employees don't perpetuate any kind of racism, discrimination or bias, and that if it happens, workers know how to stop or report it.

In an office setting, for example, employees should be trained on what kind of behavior is and isn't allowed, and what actions bleed into racist or discriminatory territory; managers should be trained on how to handle concerns when they happen, like if their employee receives a racist email from a coworker. A retail store worker, meanwhile, might be trained on the consequences of refusing service to a customer based on a protected class.

Employers should also provide a way for individuals to report concerns, and a process for addressing them, without fear of retaliation.

Kuklarni says racist and discriminatory behavior at work is "happening all the time," and employers should be thinking "are we doing anything to encourage or discourage reporting? Do we have anything in place that's keeping people from getting promoted, or raising concerns of retaliation? There's a whole host of steps that can be taken in the HR arena that serves to support employees to encourage and enable them to work in a safe environment."

Though anti-Asian racism has gained national attention in recent months due to increasingly violent and fatal attacks, discrimination against the racial group is not new. About 3 in 4 Asian Americans say they've personally experienced race-based discrimination as of April, according to Pew; the share remains unchanged from June 2020 and February 2019 surveys that asked the same thing.

Addressing anti-Asian racism, and how it's perpetuated through countless policies and institutions, will require systemic change.

Kulkarni says increased policing won't address the root of the problem, given 89% of reported hate incidents are not physically violent (they include verbal harassments, deliberate shunning, civil rights violations and online harassment). But increased law enforcement could impact those disproportionately harmed by police violence, including Black Americans and individuals who are undocumented.

She offers LA vs. Hate as a model for an alternative — a phone line that can be used to report hate incidents, no matter the race of the victim, and connects residents with community organizations with resources for immediate care, mental health support, coalition building, leadership development and more.

"Action must be taken now," Kulkarni says. "We don't want to essentially neglect the opportunities this moment offers, not only to support AAPIs but also Latinx and African American community members. All these groups have experienced varying levels of marginalization and discrimination. We have to be prepared to tackle white supremacy — that's really essentially the foundational issue here." 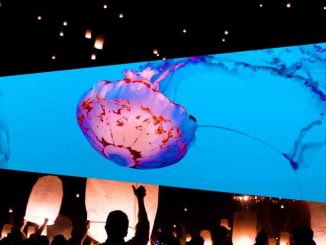 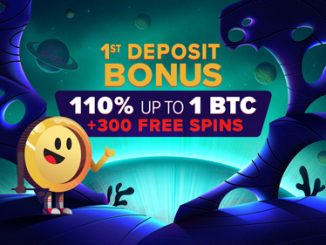 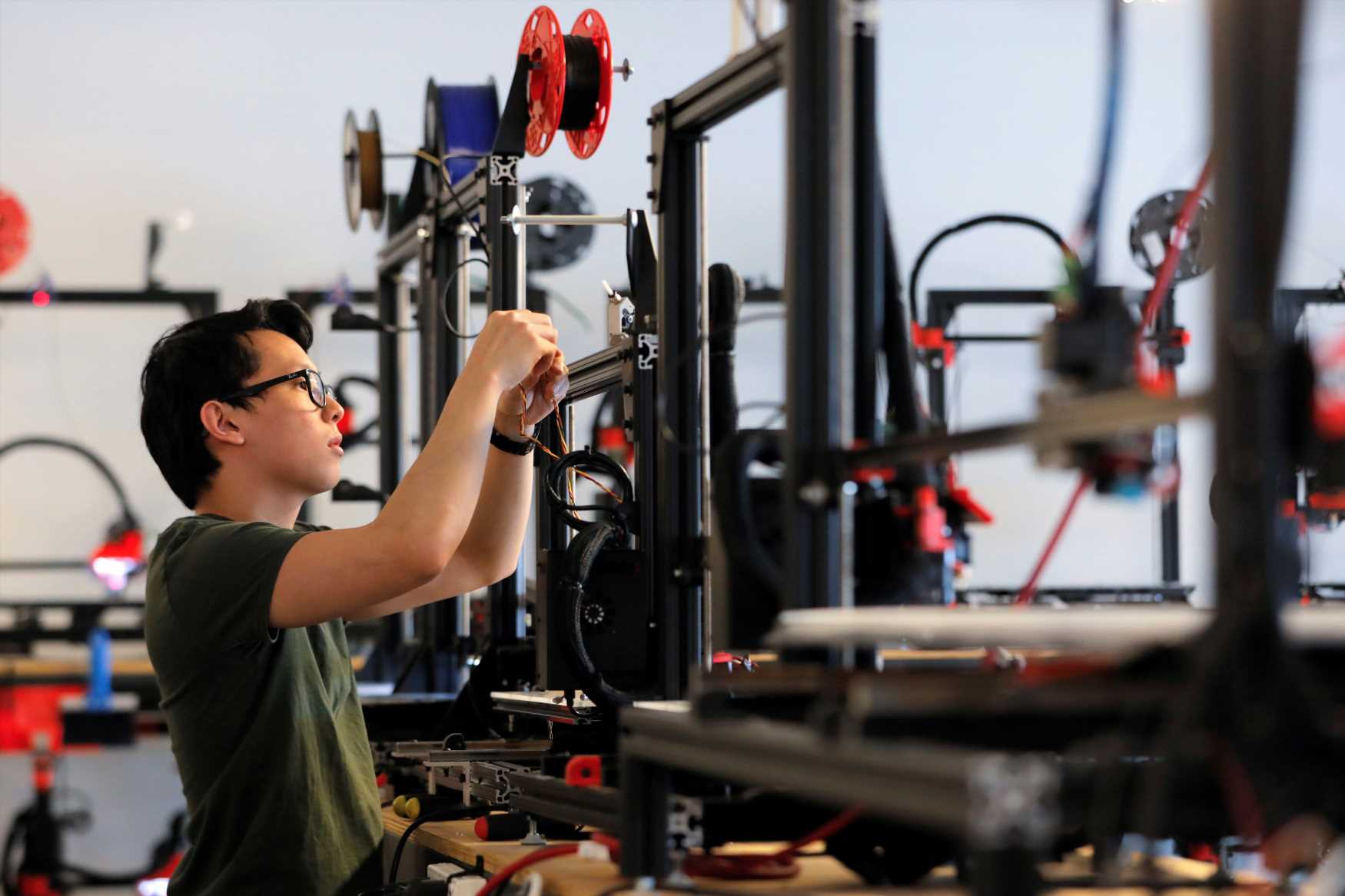 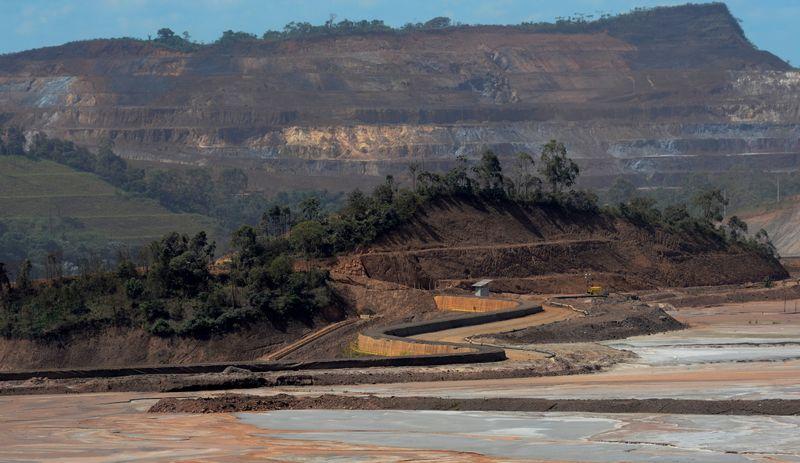