Cryptos Yield To Gravity Amidst External And Internal Headwinds 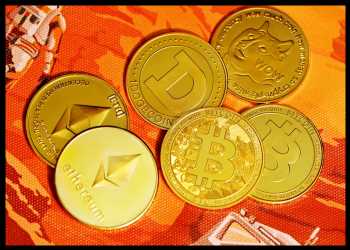 Overall crypto market capitalization dropped below the $900 billion, versus $945 billion a day earlier. In the top 100 category, only 3 cryptocurrencies have gained more than 1 percent in the past 24 hours, whereas more than 25 percent have declined more than 10 percent.

Stablecoin dominance stood at 17.36 percent amidst the volatility in the broader crypto markets. Market capitalization of stablecoins stood at $155 billion.

TerraClassicUSD (USTC) gained more than 140 percent in the past 24 hours. However, it is still trading 92 percent lower on a year-to-date basis.

34th ranked ApeCoin (APE) is the greatest laggard with overnight losses at 15.6 percent.

Axie Infinity’s Ronin Bridge has reopened after the $625 million hack that had taken place in March of this year. Ronin has in a newsletter issued on Tuesday announced that users can make deposits and withdrawals to and from the Ronin network. The new bridge design includes a circuit-breaker system as a contingency plan which increases the security of the bridge by halting large suspicious withdrawals.

The customer funds involved in the exploit have been fully reimbursed by Sky Mavis, the developer of Axie Infinity. Ronin also confirmed that it has conducted one internal audit and two external audits. 40th ranked Axie Infinity (AXS) is currently trading at $14.73, down 10 percent on an overnight basis and 84 percent in 2022.

Crypto market sentiment remained muted in the backdrop of the panel discussion by the ECB President, the Fed Chair and the Governors of the Bank of England and Bank of Japan, as part of the ECB Forum on Central Banking. Monetary tightening by the central banks has been a major influence for the crypto markets, causing unprecedented turbulence.