On June 8, Bitcoin suffered yet another terrible run that particularly and severely liquidated the last batch of bullish investors, after plunging 8% to trade at around $33,200, on top of a 40% drop in the last one month.

However, bitcoin is up double digits in the last 24 hours, climbing 13% to trade less than 3000 away from $40K at around $37,241. While the top coin has been unable to reclaim higher levels close to its current all-time high of $64,804, analysts and traders are expressing different views on BTC’s next price direction based on different indicators. 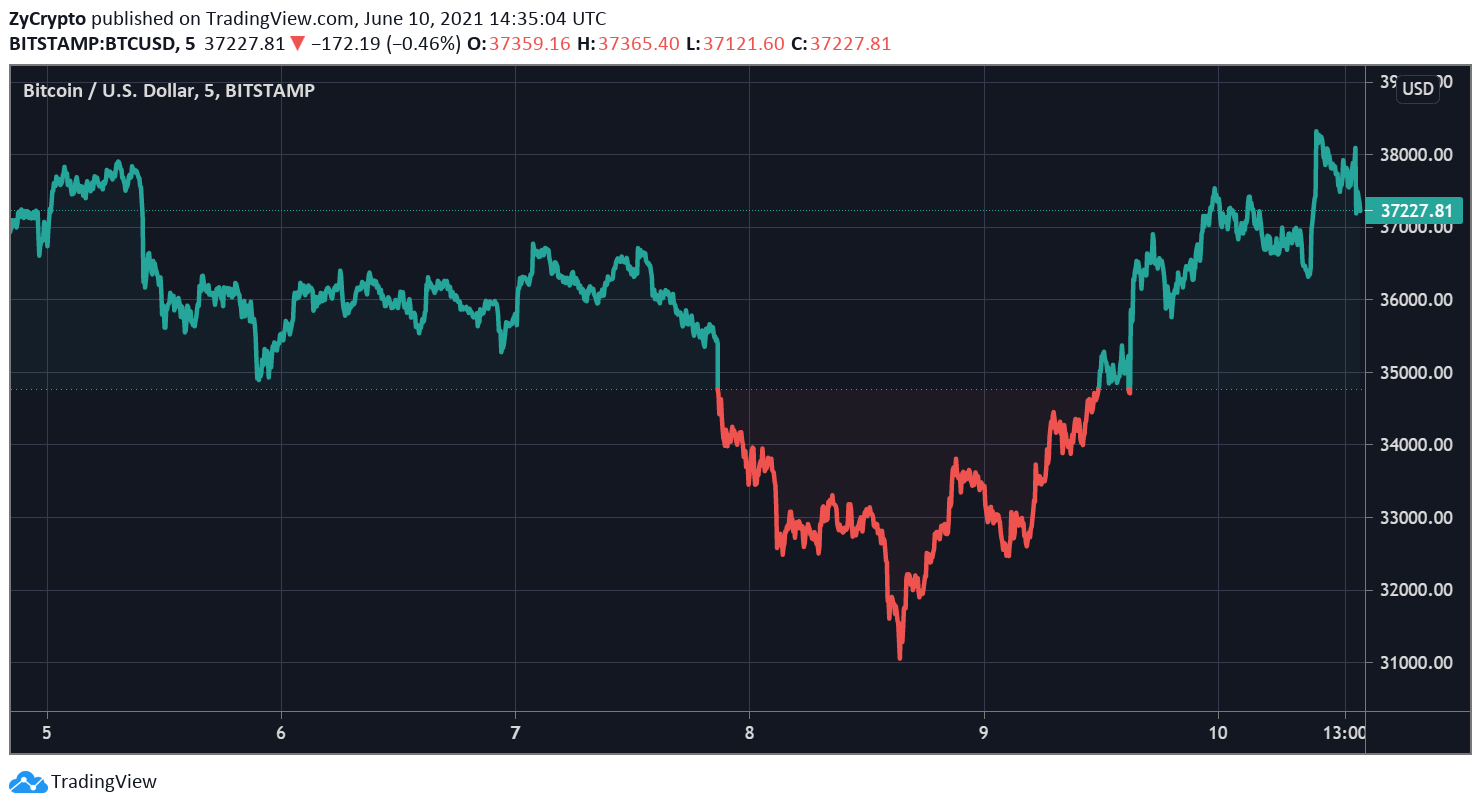 According to Mike McGlone, Bitcoin’s current trend supports the end of resistance towards a bull run, making it highly likely for Bitcoin to hit $40k before any possibility of a plunge to $20k can even be considered.

McGlone further said that when compared to Bitcoin’s price discount in 2020, the 8th June flash drop was just another indication of a bull market bottom resuming its upward trend.

“The June 8 Bitcoin plunge and revisit of lower-end-range support around $30,000 had many of the earmarks of extreme bearish sentiment, typical of more enduring bull-market bottoms.”

Capitulation Needs To Be At Least 80% From The Current ATH

When capitulation occurs in the market, analysts often consider this to be an indication that investors have given up or decided to stop trying to recapture their lost gains once asset prices start to fall.

Analysts also use different lengths of moving averages including weekly and monthly averages to determine the most likely indicators of capitulation. In 2014, 2018, and 2020, the bull market bottom was found on the 200 Weekly MA, which is not nearly similar to bitcoin’s current trend since real capitulation often needs to be at least 80% from the present ATH.

Around the same time last year, bitcoin’s momentum ushered in the now-disputed bull market, only three months and about a month after the black Thursday crash and its May halving respectively.

But since its price driving factors are now different in many ways including due to adoption, institutional involvement and other unpredictable influences, bitcoin’s real price direction remains to be speculative and prone to sudden changes.

Earlier in June, McGlone said that Bitcoin’s mainstream adoption is a solid indicator of future prices as bitcoin continues to lead the establishment and relevance of the digital assets class. These factors are unlike in the previous years, where the price was mostly based on speculative trading.

“Woodstock-like #Bitcoin 2021 Miami backs mainstream-adoption view.  The June 2-5 Bitcoin conference further validates our view that Bitcoin has transitioned to a global digital-reserve and away from being a speculative crypto.”