One of the oldest bitcoin company, established as far back as 2011, has ruffled some feathers after clearly showing just how high bitcoin fees had become.

Their integration of Bitcoin Cash now lists BTC and BCH side by side. It also lists a network fee, which is the transaction cost for BitPay to send your BTC to the merchant or to an exchange/OTC buyer. For a $5 payment, this is what it looks like: 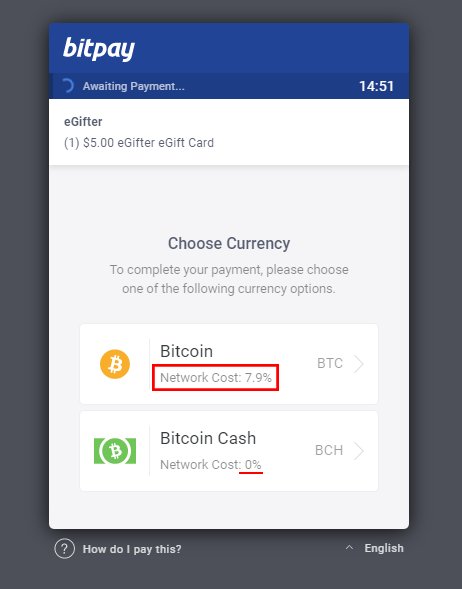 Bitcoin’s transaction levels have fallen to the lowest level in two years, currently standing at 147,00, half of the network’s capacity.

Yet the blocksize usage is somehow at network capacity considering the current level of segwit adoption.

Potentially suggesting that old transactions, where many have been bundled into one – as businesses tend to do – might now be clearing or are now often used.

As such, bitcoin’s miner fees still stand at $2.17 for next block confirmation. You could, of course, arguably make lower fee transactions and wait for hours or days, but merchant’s QR codes usually require confirmations within 15 minutes.

Now this $2.17 is what you need to pay to transfer your bitcoins to BitPay. Then BitPay has to pay a transaction fee too, to pass it on to the merchant, or if they are converting it into dollars, to send the bitcoins to the buyer.

Which means this is all getting pretty expensive even at times of low network usage, with it all vividly shown in the screenshot above where the absurdity of fees in bitcoin is made clear.

A fact of course Bitcoin Core supporters do not like to have revealed so clearly, even though they were sipping champagne in celebration of the very high fees. So Stephen Pair, BitPay’s CEO, had to make it even clearer in a statement we quote in full:

“It takes 147 bytes to spend a payment that a buyer makes. The expense of that is the cost that we are passing along as a network fee. In December, this cost to BitPay was in excess of $2 million USD. In January and February that cost has declined substantially as congestion on the network has subsided (which is why the network fee is now as low as it is). Also, we design all of our tools such that our transactions will get included in the next block regardless of congestion levels. This is essential for a usable and fast payment system.

For comparison purposes, here is a breakdown of the cost for every 1000 transactions processed. These calculations are based on a current fee rate of 40 sat/byte reported by bitcoinfees.earn.com for the “fastest and cheapest transaction fee.” Note that in December we saw prevailing rates in excess of 1000 sat/byte. The prevailing fee rate on BCH is 1 sat/byte. The calculations use an exchange rate of $9446 for BTC and $1084 for BCH.

Currently, the cost of using BCH is small enough that it is not worth the added UX complexity to present a network fee when users choose it (of course this will change if BCH fee rates rise). We are also considering employing Segwit transactions as a way to further reduce our costs (and hence the network fee we charge), but I don’t have stats handy that would show how much it would save (a large portion of the 147 bytes is witness data and would incur a smaller cost).

Our goal is to provide the best payment services on the blockchains we support and we will continue to innovate in our efforts to achieve that goal. While BTC might be more expensive to use, we expect there to be limited consensus rule changes going forward. That means that Bitcoin is a very well understood and stable system. There is a lot of value in systems that are stable and well understood. We contrast this with Bitcoin Cash where we expect more experimentation. Experimentation is also valuable, but carries increased risk. A large portion of our processing is for very high value transactions where where the current miner fees are irrelevant. Bitcoin works extremely well for those transactions.”

The above makes it clear why they had to add other options. Their business was basically dying, with Bitcoin Core developers intentionally increasing fees before alternatives were out.

In response to criticisms they were limiting one of bitcoin’s main feature of almost free and almost instant transactions, Bitcoin Core developers, or their supporters, would sometime respond by saying bitcoin owes them nothing and the problem was their business model.

Well, BitPay owes bitcoin nothing too and the problem might be bitcoin’s “business model.” So they’re now diversifying and discharging their duty of giving the public full information before they make a payment.