Bitcoin rallied above the $13,000 level Wednesday, adding to its double-digit gains this week.

The world's first and largest cryptocurrency soared 15% to a high of $13,485.85 Wednesday afternoon — its highest level since January 2018, according to industry site CoinDesk. The spike brings bitcoin's one-week gains to more than 40%, and its year-to-date increase to more than 240%.

While bitcoin's price moves can be opaque, analysts largely attributed the bounce back from 2018 lows to more interest in the space following Facebook's announcement of a cryptocurrency project, key technical levels being broken, and safe haven buying amidst increasing global tensions and trade wars.

"The scale of the recent appreciation is striking," Jim Reid, Deutsche Bank's multi-asset analyst, said in a note to clients Wednesday. "Obviously recent dovishness from central banks has seen investors look towards alternative currencies, but perhaps Facebook's unveiling of its Libra currency has seen investors look again at cryptocurrencies with fresh eyes."

Facebook's cryptocurrency project "Libra," which is expected to go live in 2020, will not be controlled or fully run by the tech company, according to its white paper. Stripe, Uber, Mastercard, Visa, PayPal and Spotify are among the dozens of others with stakes in the project.

Bitcoin's bounce marks a sharp turnaround from a weak performance last year. It and other cryptocurrencies plunged more than 70% by the end of the year as high-profile hacks, crack-downs on initial coin offerings and the lack of new bitcoin trading offerings, like an exchange traded fund, dampened enthusiasm. Bitcoin started trading this year around the $3,7000 level and has more than tripled since. Prices are still short of their all-time high near $20,000 reached in December of 2017. 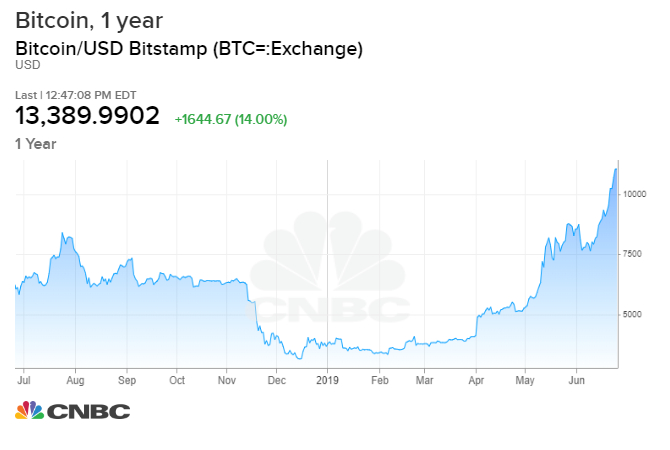