Bitcoin Plunges Below $20,000 Again As ECB Gears Up To Raise Rates 'At A Faster Pace'

On Wednesday, Bitcoin fell as low as $19,899 following a risk-off by investors after a volatile New York session on Tuesday. Ethereum dipped by over 9% to $1,114 with other cryptos such as Solana and Shiba Inu plunging by over 10%. Technology stocks led the overnight carnage with the high beta Nasdaq 100 Index (NDX) dropping close to 4% before market close.

The sharp drop was triggered by a plethora of factors, key among them, a statement by the European Central Bank President Christine Lagarde detailing a plan to go harder on inflation. Bitcoin and other cryptocurrency investors have particularly been attentive to inflation rate decisions, with major asset classes balking at the prospects of further monetary tightening to tame soaring prices.

In the Tuesday statement, Lagarde reiterated her commitment to ease inflationary pressure stating that despite the underlying economic uncertainty “the pace of interest rate normalization cannot be defined ex-ante.”

Consequently, she stated that the bank intended to raise the three key interest rates by 25 basis points during the next meeting on 21 July after ending its bond-buying stimulus program. The last time the bank raised interest rates in the eurozone was in 2011. However, the ECB chief noted that “if the medium-term inflation outlook persists or deteriorates, a larger increment will be appropriate at the September meeting,” signaling that more interest rate hikes could be forthcoming.

In the past two months, Bitcoin miners have also been dumping their rewards amid plunging profitability and soaring energy prices. According to a report by Arcane Research, May witnessed the biggest sell-off by miners since 2020 with several publicly listed bitcoin mining firms offloading 100% of their May rewards. While dumping by miners has historically signaled the market is entering the final capitulation phase, efforts by miners to sell their BTC in large quantities could negatively affect the cryptocurrency’s price. 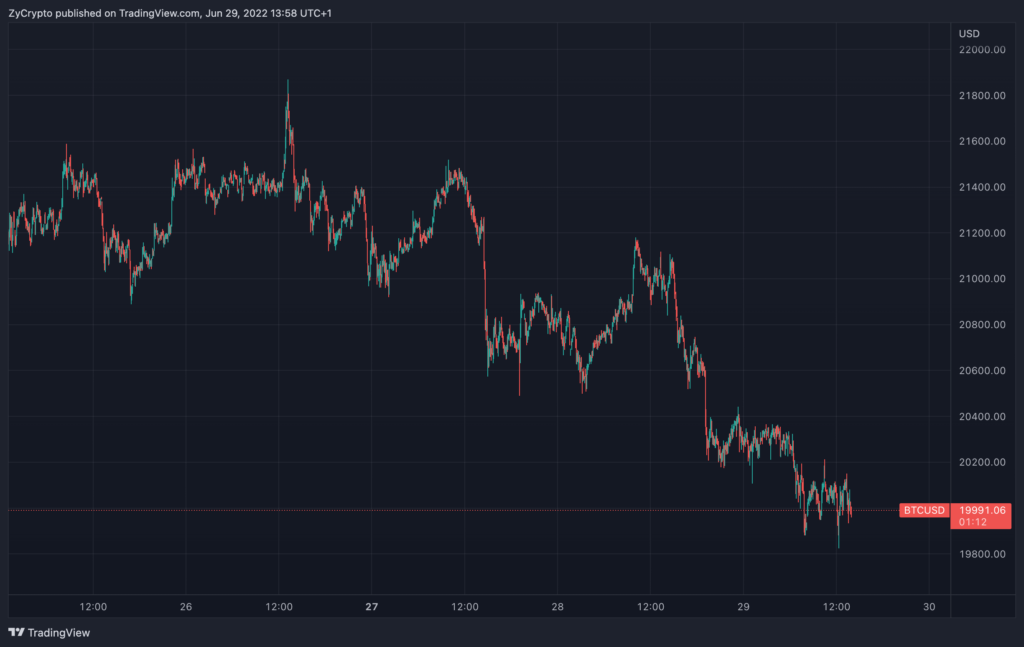 Technically, although Bitcoin looks quite weak in the $20ks, there is so much hope by various analysts that the price could surge from here. As of writing, Bitcoin is trading at 20,023 after losing over 4.53% in the past 24 hours. A break below the $20,000 and 2018’s high of $19,798 could trigger a deeper sell-off, potentially sending prices to sub-$17k.The sharp drop was triggered by a plethora of factors, key among them, a statement by the European Central Bank President Christine Lagarde