Bitcoin is exhibiting a lot of 2017 bullish patterns in its current cycle. But unlike 2017 when everything seemed to happen behind the scenes, this time there is much more going on in the mainstream. This has in itself ensured that the ‘bubble’ narrative no longer hinders prices.

One critical chart that identifies the pattern similarities and helps predict where prices could be headed and what might possibly be Bitcoin’s next top points to a 400% price surge. As shared by Jack Purdy, a top researcher at Messari Crypto, Bitcoin is exhibiting the same pattern it did at $3,500 before making a 471% surge and reaching the $20K top. With prices hanging around $48K, a similar surge would send Bitcoin to a high of $274K.

The same view has been shared by Twitter account Bitcoin Archive. The chart shared to over 23K users shows a hypothetical price movement consistent with previous bull market behavior. With it, it’s clear that prices are headed to a top of $390K. This prediction while in line with Purdy’s could however be a long way down the road.

Mid last year, these predictions could have sounded outrageous, but crypto moves fast. In the last few weeks and months, interest from institutions, government, and top influential people has shot Bitcoin into a world-class asset and a must-have for any portfolio. Because interest is still miniature in regards to mass adoption and/or other top assets, prices are still in infancy hence predicting a top is almost impossible.

For now, Bitcoin is meeting major resistance at $50K. An attempt to top this during the weekend was again rejected as sellers took profits as prices approached it. Strong support has been confirmed after a pullback early Monday Bitcoin having settled at $48K, the current higher support. 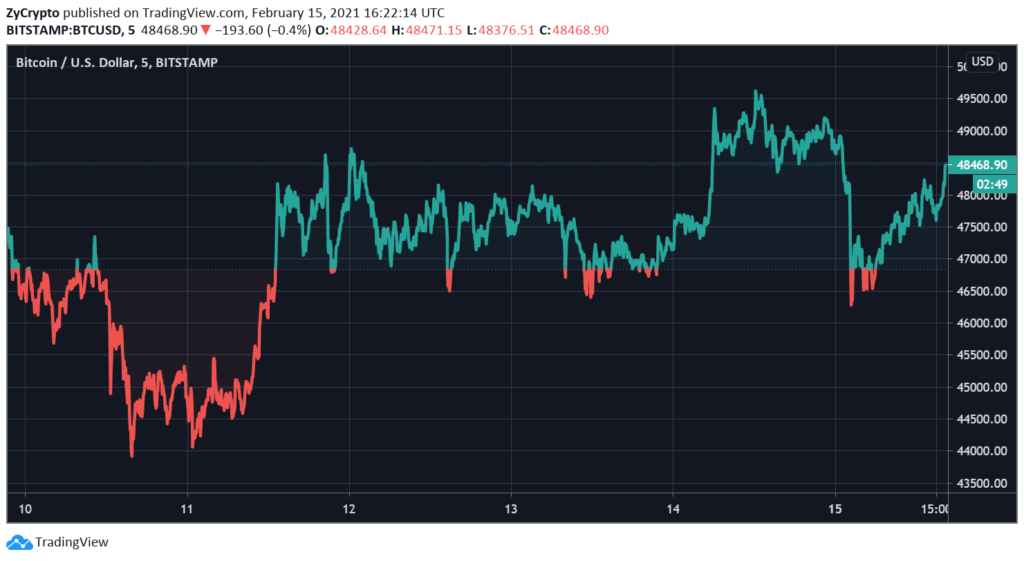 With the next big development, bulls will once again try to break the $50K high, if recent shakeouts have really worked, the weak hands will have sold to the holders and prices can top $50K. If $50K is successfully tamed by bulls, being a key psychological level is set to trigger a new bull cycle that has been predicted to see Bitcoin land anywhere between $80K and $100K.