The price of Bitcoin has been fired up with volatility in the past few days. the largest digital asset has been continuously jumping up and down the price ladder, which has puzzled quite a few market participants of the recent future.

On 3 November, the BTC difficulty experienced a large shakeup as it dropped to 16.787 trillion. This level has been unseen since June and marked the second-largest decrease of all time.

According to Glassnode, the only time difficulty took adjusted by over -18% over 9 years ago in October 2011.

The current mining difficulty adjustment works in the favor of miners. The current price of BTC has been in a profitable mining range for small-term, mid-term, and long-term miners. Instead, this drop in difficulty will not only easier for miners to mine BTC but also get better incentives.

This adjustment puts BTC in a more secure environment and with it under a relatively bullish trend over the past three weeks. This adjustment also hinted at the network’s self-regulation which was a good sign for the BTC value appreciation. Glassnode CEO, Rafael Schultze-Kraft also noted upon the adjustment:

However, the Bitcoin miners’ outflow has been telling a different story.

According to Glassnde alerts, the BTC Exchange outflow [1d MA] has reached a seven-month high of $46.892 million. This level was last seen in September. 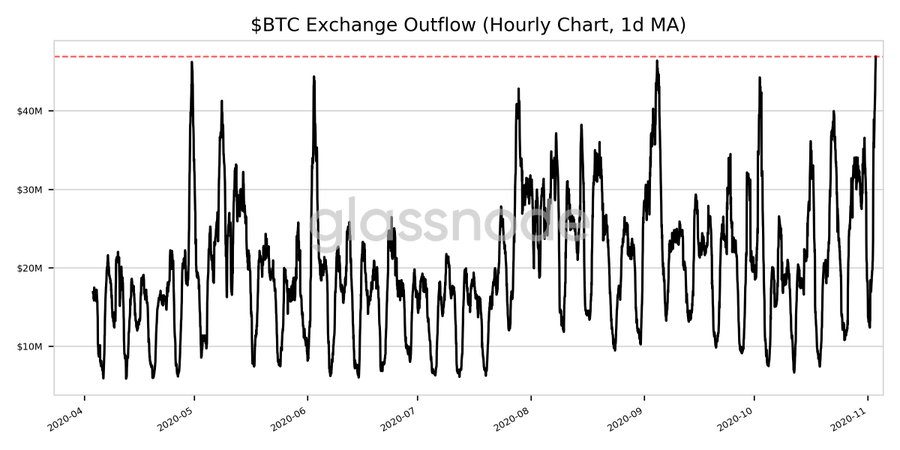 This outflow has been increasing in the past 24-hours and this was a sign of certain miners’ leaving the market. A reason behind this trend suddenly noting a rise could be the current opportunity.

Miners’, especially short-term miners, to get the tail of the profit. Whereas the mid-term and long-term miners are gaining more profits now. Plus, with the Election results around the corner, the impact of it will be felt in the stock market. Given Bitcoin’s strong correlation with the stock market, it may carry waves of volatility in the cryptomarket.