Just when many lost hope and the overall-confidence was dipping because of the constant market decline, the G20 regulators implemented positivity back in the community with various bullish statements on cryptocurrency regulations. On March 18, just a day before the G20 Buenos Aires summit meetings were to begin, the Financial Stability Board (FSB) wrote a letter where Chairman Mark Carney said that there is no immediate need to regulate digital currencies as of now.

With the announcement, the leader Bitcoin experienced a speedy return in price, since then it has recovered to the level of $8,558.80 [per time of writing – March 20] with a market cap of $144 billion at the top of the list.

However, the strongest runner in the last 24-hours with a double digit gain out of the top-ten digital currencies by market capitalization is EOS [EOS] rocking strongly a 22.88% increase reaching the price of $5.83. For a couple of hours the pair EOS/USD was battling for overcoming the important $6.00 but with no success on the first attempt [the particular zone was not touched since March 12]. 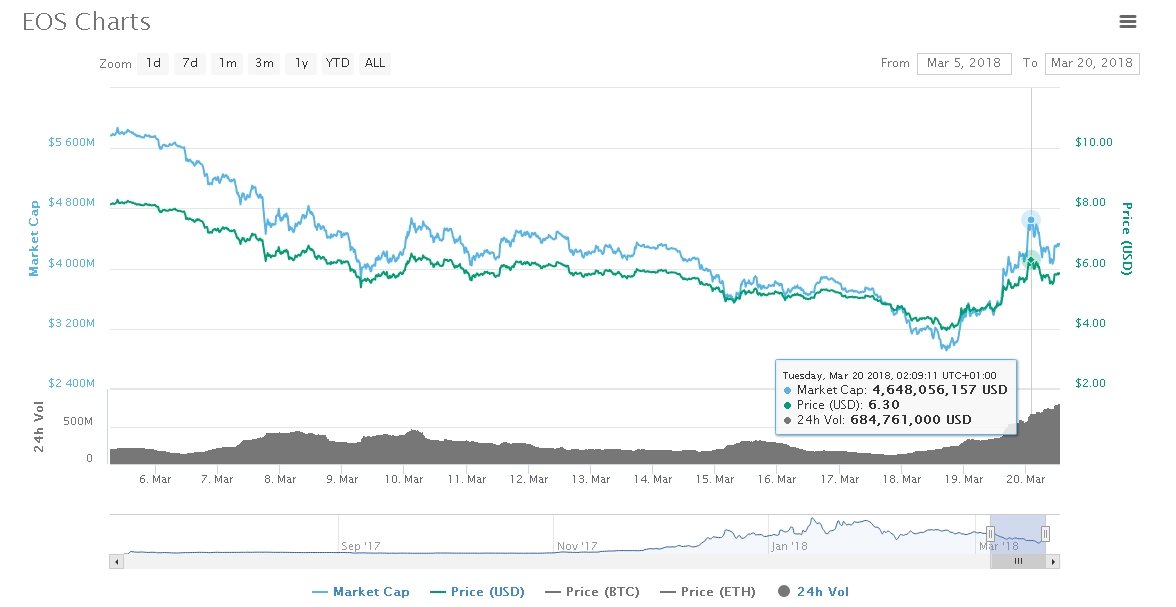 The platform has launched back in July 2017 with its debut in the market. Together with other developers, Dan Larimer – the founder, designed and created the EOS blockchain network with the idea of developing the fastest DApps platform there is. The blockchain [right now] can process and complete more than 50k needed to be completed confirmations per second. Accordingly, the coin will give business and startups to develop very advanced blockchain-backed apps. The initial coin offering and token-distribution level was running for about a year. The services and features which are delivered by the EOS Blockchain, the current development in EOS and of Block.one – make EOS a strong competitor for any platform that supports Dapps while cementing its place stronger.

What makes it very unique, is that it does not need any mining farm of EOS. This is all result of the new EOS token which is created whenever block producers generate a specific number of blocks, in which case the reward is the above mentioned new EOS tokens. The EOS blockchain allows the block producers to give the desired figure for their expected pay. Depending by the general median value of the desired pay given by the producers in general – the number of tokens will variate. On top of all, a mechanism has been installed by the backing up team to check if the feature is being misused. Per annum, the level of token supply will not surpass 5 percent.

While taking away a delegated proof of stake protocol. the platform delivers a smart environment for development and the creation of decentralized application. The DPoS – Delegated Proof of Stake protocol of the EOS blockchain network, based on information and data released by the team, reaches for higher transactional volume throughput with up to 100k per sec. It has been proposed to use a so called – Horizontal scalability feature for tanking down the fees to the dreamy zero.

Lates News:
2018-03-20
Previous Post: Bitcoin, Ethereum and Ripple Are On The Rise
Next Post: Sierra Leone Denies Blockchain Use In Recent Election