IOHK CEO Charles Hoskinson has revealed a bunch of brand new features for the purpose of helping small pools on the Cardano network. Staking on Cardano started to be available on July 29th, after the Shelly mainnet was released.

Even though it is still in its early days, the last three weeks or so have emphasized a difference between big and small pools.

A Gap Between Big and Small Pools

Hoskinson​ says that Cardano can become the most decentralized network in the world, and the Shelley roadmap lays out the expectation that the program can attain 100 times the decentralization of other networks.

“Come the end of the Shelley era, we expect Cardano to be 50-100 times more decentralized than other large blockchain networks, with the incentives scheme designed to reach equilibrium around 1,000 stake pools.”

While the 1,000 stake pools aim has been more than met, as we all see, the real number on its own doesn’t share the whole story. The pie chart below depicts about eight pools controlling half of the network. For now, IOG (Input Output Global) is the largest pool with approximately a fifth of the controlling stake. 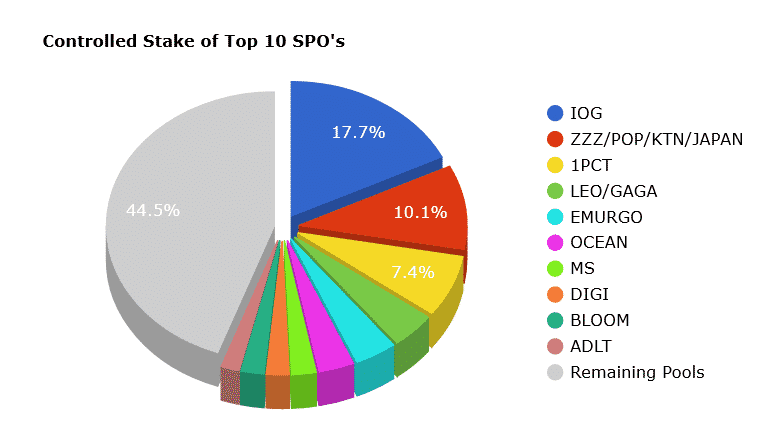 Current data shows that about 80 pools, or 7 percent of the staking pools, still have zero controlling stake on the Cardano network. If Cardano plans to lay claim to being the most decentralized system in the world, then action is required to close the gulf between big and small pools.

Hoskinson talked about what Cardano is doing to increase delegation to the small staking pools on YouTube.

For now, one wallet can only delegate to one staking pool. Even though a temporary solution exists – creating more than one wallet – this is rather troublesome and time-consuming. To address this, Hoskinson​ suggested the idea of adding a ‘one to many delegation’ feature, which will enable users to delegate to multiple pools from a single wallet.

“As a consequence, they do atomic delegation, so they delegate all of their ADA to just one pool. Whereas if they were given the choice to do one to many, they would probably proportionally delegate, which would benefit small pools a lot,” Hoskinson​ said.

In addition to that, Cardano plans to launch a sharable portfolio feature, from which users would be able to share their choice of pools and allocation percentages in a so-called ‘playlist.’

“Not only do you have the option to delegate to that portfolio, but you also have the option to share, so you can export it,” Hoskinson​ explained. “And what this means is that users can create their own, basically, playlists… and share them with the broader community.”

The idea behind this concept is to pair grouped pools with investor intentions. For instance, the creator of Cardano noted portfolios that have only socially beneficial pools, or small stake pools, or geographically biased pools, and so on.

Moreover, the upcoming Atlas explorer will pack a function to interrogate ‘playlists,’ allowing them to have access to this information.

The Famous Postmodern ‘Crayola’ House Is for Sale