Bitcoin Stronger Than Ever, Gains Market Share Over Competitors

Two months ago a seismic shift appeared to be underway among cryptocurrencies. Ethereum was on the verge of overtaking Bitcoin in terms of both market share and fiat value. Other competing coins, such as Litecoin and Ripple, were also rapidly advancing. Although Bitcoin’s fiat value had reached record highs, many analysts believed that it would lose its position as the most popular crypto by the end of the Summer.

It would be easy to blame Bitcoin’s slide on the scaling debate, and no doubt it was an issue. Bitcoin needed an upgrade, and developers and miners seemed incapable of reaching a consensus solution. This alone would prompt investors to stay away. But Bitcoin’s loss of market share seemed based on something more fundamental. For the first time, investors were taking an interest in altcoins based on their own merits. Features such as smart contracts and fast confirmation times became relevant, and these altcoins could deliver. By mid-June, Bitcoin found itself in a race for supremacy based on core technology, and it was losing.

July should have been the month where Bitcoin lost its place as the top cryptocurrency. Instead, it rebounded. Bitcoin gained more than 10% market share, mostly at the expense of Ethereum and Ripple. Despite the turmoil of the scaling debate, and the hard fork, it gained fiat value. Moving into August, Bitcoin has reached record highs, breaking $3200 for the first time. It is now clear that, although several altcoins have now become major cryptos, Bitcoin will continue to be the most popular. 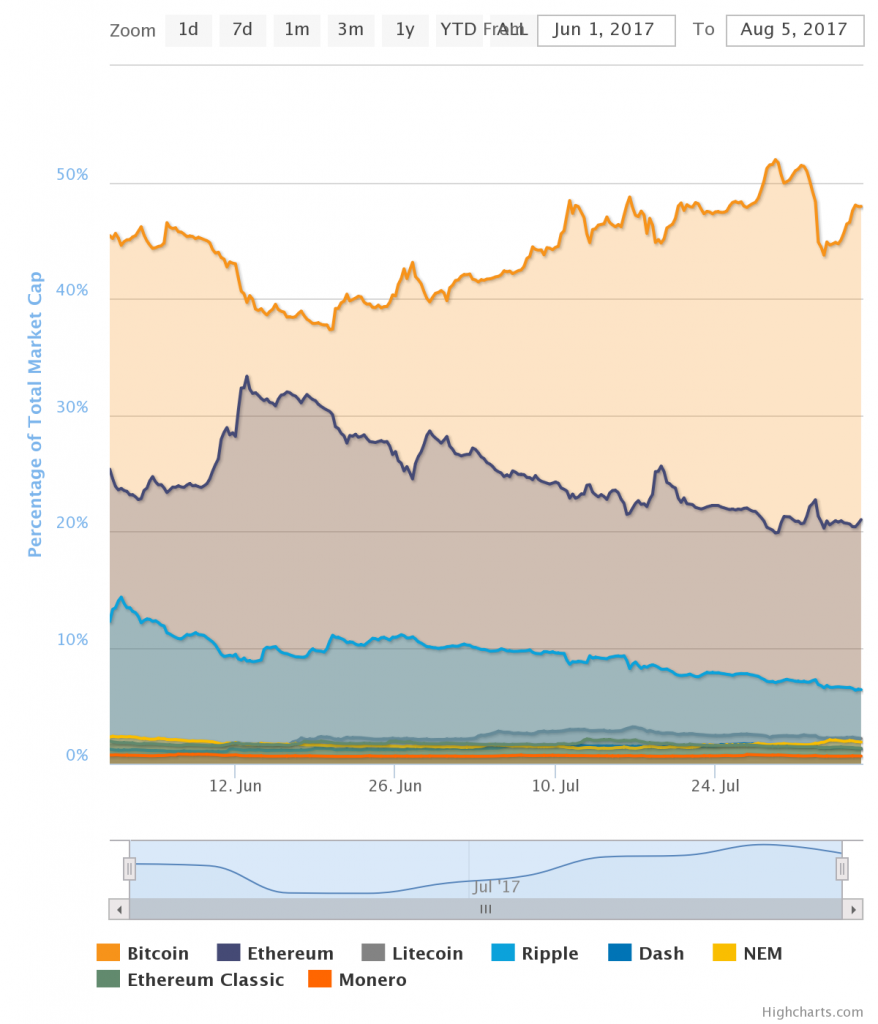 Bitcoin’s greatest advantage remains its name recognition. Most new crypto investors believe Bitcoin to be the best option, despite technical merits. Mainstream press coverage of cryptocurrency rarely mentions altcoins, and then generally only in passing. Likewise, institutional investors, such as those managing cryptocurrency hedge funds, firmly regard Bitcoin as the most viable long-term asset. Resolution of the scaling debate has also worked to Bitcoin’s advantage. August 1st has passed, and Segwit2X has been embraced by all but a handful of miners. Confidence in Bitcoin’s future has prompted a predictable wave of support. Also, as expected, much of the Bitcoin Cash created by the hard fork is being sold and re-invested in Bitcoin, thus driving up the price.

Bitcoin’s ability to remain the top crypto is also based on the fact that it is designed not as a means of storing wealth, but as a means of transferring it. Bitcoin is, after all, a currency. In this capacity, it easily reigns supreme over other cryptos. No competitor even comes close to Bitcoin’s global adoption rate by businesses large and small. It is thus not surprising that the events of June and July did little to slow its growth, or dampen its popularity. Business owners are satisfied, and see no reason to replace Bitcoin with a lesser-known alternative.

Supporters of altcoins can point to the fact that, even with the current surge, Bitcoin has yielded substantial market share over the past few months. In January, almost 90% of all cryptocurrency fiat value was in Bitcoin. Today, that figure has fallen to just under 50%. The events of the past few weeks have nevertheless proven that adopters of cryptocurrencies are not looking for Bitcoin’s replacement. Altcoins are growing in value alongside Bitcoin, but none seem likely to overtake it. As the cryptocurrency revolution moves forward, it is now difficult to see any situation where Bitcoin will not be the key player.

Lates News:
2018-03-03
Previous Post: Crypto altruism on the rise
Next Post: Coincheck under trial – Lawsuit filed by 132 investors for the NEM hack